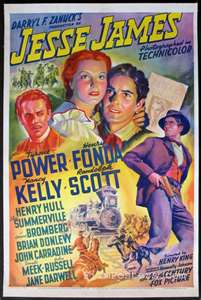 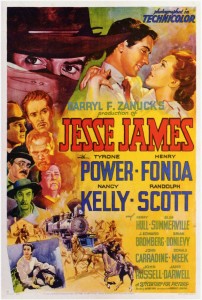 If you had never seen a Jesse James movie, this might not be a bad place to start—not because it’s strongly factual (it isn’t), but because it’s almost pure romanticized legend.  It’s a top-flight big-budget production with a strong cast, a big-name writer and a well-known director, in color at a time when almost all films were in black and white.

Jesse James: “I hate the railroads… and when I hate, I’ve gotta do something about it.”

As the film opens, the St. Louis Midland Railroad, in the person of Barshee (Brian Donlevy at his slimiest), is bullying and bamboozling poor, honest Missouri farmers into selling their land for much less than it’s worth. That doesn’t work on the James family of Liberty; their mother, Mrs. Samuels (Jane Darwell) feels poorly but is strong-minded. When Jesse (Tyrone Power) shoots Barshee in the hand while he’s trying to use a scythe on Frank (Henry Fonda), Barshee gets a warrant for his arrest. While trying to serve it, he throws a bomb into the room where Mrs. Samuels lies, killing her and starting the James brothers on their outlaw trail for good.  Jesse confronts Barshee in a bar, killing him and one of his strong-arm minions. 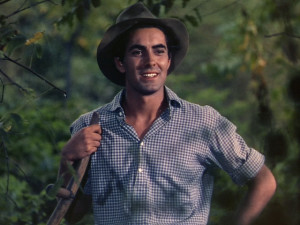 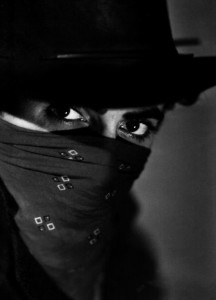 Jesse has to leave his long-time girlfriend Zee Cobb (Nancy Kelly), niece of the local newspaper editor, Major Rufus Cobb (Henry Hull).  Liberty Marshal Will Wright is sympathetic to them, like many of their fellow Missouri citizens, but is also romantically interested in Zee.  After Jesse and Frank have started a successful career robbing trains, Zee and Will talk Jesse into taking the railroad’s offer of leniency if he turns himself in.  However, the sleazy railroad president has no intention of keeping his word and plans to see Jesse hung.  (The offer of a deal to return to respectability that turns bad is also a feature of the stories of Billy the Kid and Butch Cassidy.) 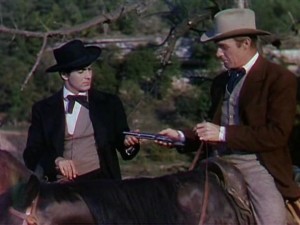 Jesse (Tyrone Power) turns himself in to sympathetic Marshal Will Wright (Randolph Scott).

Through the craftiness of Frank and the connivance of Will, Jesse is liberated.  Before resuming his outlaw career, he and Zee are married, but the outlaw life wears on her.  When her son is born, she returns to her uncle’s home in Liberty, and Jesse turns mean.

Zee Cobb James:  “Shooting and robbing—it’ll just get in your blood, Jesse. You’ll end up like a wolf!”

A detective spreads word that if a member of the James gang kills Jesse, he will receive $25,000 and amnesty.  Bob Ford (John Carradine) is tempted, and he warns the detective about the gang’s next job in Northfield, Minnesota.  The gang is shot up, Jesse is badly wounded and Frank and Jesse barely escape, desperately jumping their horses through a storefront window and, later in the pursuit, over a cliff into a river.  Frank disappears from the story at this point; Jesse escapes his hunters and arduously makes his way back to St. Joseph, where Zee finds him and nurses him back to health.  He resolves to take his family to California and go straight. 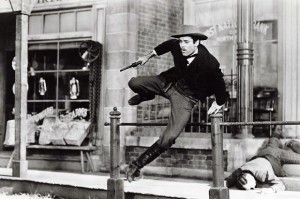 Frank James (Henry Fonda) runs for his horse in Northfield when a bank robbery goes bad.

As he is about to catch a train west, he is visited by the Ford brothers, Bob and Charlie. They tell him Frank wants to do a last job, and he is tempted. But he refuses, and as the brothers are leaving, Bob shoots Jesse in the back.  As the film closes, Major Cobb gives a populist eulogy for the deceased outlaw, painting a very sympathetic portrait of him.

Many of the members of this cast do very well. Tyrone Power, Henry Fonda, Jane Darwell, Brian Donlevy and Donald Meek are all very good.  Power was known more for costume dramas, but he made a few good westerns (The Mark of Zorro, Rawhide).  Henry Hull quickly becomes tiresome in his role as the hard-drinking editor, the first of a string of those in westerns. (See, for example, Wallace Ford in Wichita and Edmond O’Brien in The Man Who Shot Liberty Valance.)  This is a problem in the writing, as well as in Hull’s overplaying.  Nancy Gates as Jesse’s wife Zee often comes across as sanctimonious in her sometimes lengthy ruminations on outlawry and such; again, much of this is due to the writing.  She did not have a robust career, but she appeared in at least one other good western in the same year:  Frontier Marshal, also with Randolph Scott.  At this point of his career, Scott often played ethical characters with criminal conflicts (Western Union, Virginia City); here he is also conflicted because of his attraction to Zee and his sympathy for the brothers.  He’s the most ethical character in the film, although he doesn’t really have much to do.  Both Donald Meek and John Carradine would appear the same year in the superb Stagecoach.

Although it has occasional bursts of action, there are also several spots where it bogs down slightly with a lot of talk, when Jesse is briefly in jail, when Zee is philosophizing about the outlaw life, or when Major Cobb is dictating another of his cranky, repetitive and tedious editorials.  Notwithstanding the pacing problems and talkiness, the technicolor Tyrone Power is always great to look at, and Henry Fonda as Frank is excellent and persuasive. 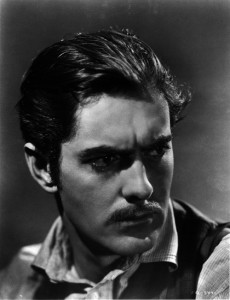 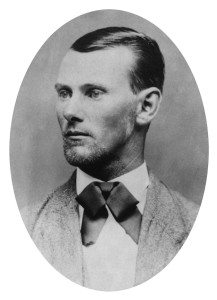 A brooding Tyrone Power as Jesse; and the real Jesse James about the time of his death at 34 in 1882.

This would be followed the next year by a sequel.  Since Jesse dies at the end of this movie, the sequel is about Frank:  The Return of Frank James, with Frank seeking revenge for Jesse’s killing.  Henry Fonda as Frank, Henry Hull as the tedious Major Rufus Cobb, Donald Meek as the slippery railroad president, John Carradine as Bob Ford and J. Edward Bromberg as Runyan the detective all reprise their roles.

The variations from actual history are too numerous all to be mentioned here.  The film makes no mention of the James brothers’ guerrilla history with Quantrill and Bloody Bill Anderson during the Civil War.  There are no Younger brothers in the gang; all the members but Jesse and Frank are nonentities.  Events like the railroad-sponsored bombing are misplaced and telescoped together in time.  Mrs. Samuels was not killed by the incendiary bomb, but she did lose an arm and it killed her youngest son.  It was not what started their outlaw careers but came after they were well-established in robbing trains and banks.  Bob Ford was quite young when he killed Jesse, and he was not a member of the gang on the Northfield raid.  No one gave any warning to authorities in Northfield; the citizenry was just well-armed and prepared not to let its bank be robbed.  Jesse was not wounded at Northfield, although other members of the gang were killed or badly shot up (e.g., the Youngers).  The movie shows Jesse being killed shortly after recovering from his Northfield wounds. In fact, the Northfield raid was in 1876 and Jesse was killed six years later, in 1882.  There is no evidence that Jesse was planning to move to California when he was killed.  Jesse was not the Robin Hood figure shown in this movie.  For a more accurate historical depiction of the James brothers and their depredations, see The Long Riders more than forty years later. 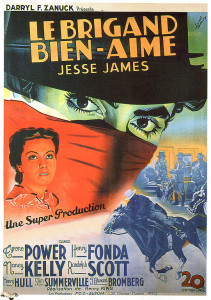 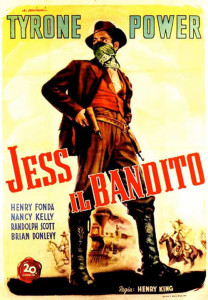 The film has an unfortunate place in movie history because of a stunt.  As Frank and the badly wounded Jesse are making their escape from Northfield, they both appear to ride off a 70-foot cliff into a river below.  While it appears to be two riders and two horses, the second is simply a closer camera angle of the one stunt, so it looks different.  The horse in the stunt was killed, however, which caused such an outcry that it led to the formation of what became the American Humane Association’s Film and Television Unit.  Since 1940, the unit has monitored the treatment of animals in movies, and since 1989 the phrase “No animals were harmed during the making of this picture” (a registered trademark) has appeared in the credits of movies for which it is true.  The stunt is visually impressive, but knowing what the outcome was dampens the viewer’s enthusiasm.

In 1939, the use of color in film was in its infancy.  Few movies were in color, like the big productions Gone With the Wind and Dodge City.  This was.  Director Henry King had been making movies for 25 years at this point, including such notable silent films as Tol’able David and The Winning of Barbara Worth.  He was not involved with the sequel.  He made several more memorable westerns, including The Gunfighter and The Bravados, both with Gregory Peck, before finishing his long and eminent career more than twenty years later.  Writer Nunnally Johnson had a newspaper background, like many others of the best writers for movies (Ben Hecht, Charlie MacArthur).  He sometimes played a production role on movies, and he was prominent enough that his name sometimes even appeared with the movie’s title in the credits (“Nunnally Johnson’s Along Came Jones,” for example).  He did not write many westerns, although he did some uncredited work for King on The Gunfighter.  Shot on location in Missouri.  108 minutes long.