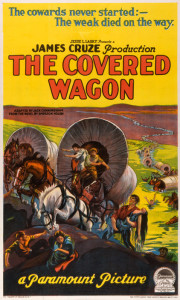 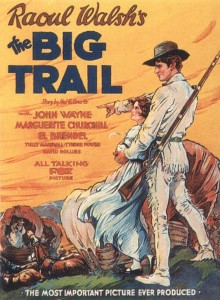 Since the classic silent epic The Covered Wagon in 1923, some western stories have been based in the American movement westward that began in earnest on the Oregon Trail in the 1840s.  With the fading of the fur trade, some mountain men became scouts for wagon trains (Kit Carson, The Way West).  Groups like the Mormons (Brigham Young, Bad Bascomb, Wagon Master) had their own epics of western movement during the wagon train era.  Indeed, director James Cruze of The Covered Wagon, was the son of such Mormon emigrants.

At their peak in the 1940s, wagon train westerns were, like technological westerns, another way to express the nation’s progress toward its triumphant Manifest Destiny, although sometimes the wagon train was in reverse (Virginia City, The Outriders).  The biggest names among directors of westerns have done wagon train westerns (John Ford, Anthony Mann, Howard Hawks, Raoul Walsh et al.).  Although it featured less star power in its cast than most Ford westerns, Ford’s own favorite among his movies was said to be 1950’s Wagon Master.  Most of the biggest stars in westerns did a wagon train at one time or another:  see a very young John Wayne in The Big Trail (1930), a young and skinny Gary Cooper in Fighting Caravans (1931), James Stewart in Bend of the River (1952), and Kirk Douglas, Robert Mitchum and Richard Widmark in The Way West (1967), for example. 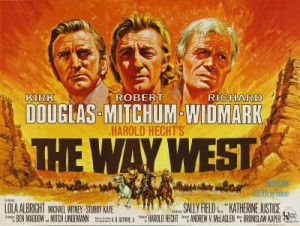 As the glow of Manifest Destiny faded during the Vietnam era, there were consequences for the western as well as for movies generally.  Although there were efforts to recast westerns in revisionist ways during the 1970s, their popularity as a genre was fading.  One casualty was the cavalry western, which waned with the decreasing popularity of the military in society, especially among the young.  Another was the wagon train western, as Americans rethought Manifest Destiny generally and the treatment of the Indians specifically.

The list below includes the most prominent westerns that feature wagon trains, although some of them (such as Red River and Silverado) may have wagon train sequences and not be primarily wagon train westerns. (Red River, for example, is primarily a cattle drive western.)  The best movies among them are indicated with an asterisk (*).  Any proposals for additions to the list are welcome. 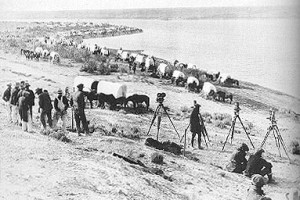 Filming The Covered Wagon in Utah,1923.

*The Big Trail—John Wayne (1930; Dir: Raoul Walsh).  An epic experiment in 70 mm. that was supposed to be young John Wayne’s breakthrough as a star.  He had to wait for Stagecoach, almost ten years later.

Fighting Caravans—Gary Cooper (1931).  Cooper stars as a wagon train scout in a Zane Grey story, leading a wagon train from Independence, Missouri, to Sacramento.  They seem strangely to be hounded by Kiowas most of the way across, although Kiowas were generally far to the south of their trail west.

Kit Carson (1940).  John Hall as the legendary and highly fictionalized mountain man and pathfinder, leading a wagon train to California during the 1840s.

Brigham Young—Tyrone Power, Linda Darnell (1940; Dir: Henry Hathaway).  The young lovers from The Mark of Zorro are back as young Mormon lovers led by Dean Jagger in the title role.

Bad Bascomb—Wallace Beery (1946).  Outlaw Zeke Bascomb (Wallace Beery) hides out as a guide to a wagon train of Mormons, only to be brought to the good side by young child Margaret O’Brien and her grandmother Marjorie Main.

*Red River—John Wayne (1948; Dir: Howard Hawks).  John Wayne heads to Texas on a wagon train in 1851.  When he leaves the train and heads south, he loses his love to Comanches and never entirely recovers from that. 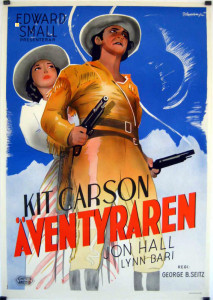 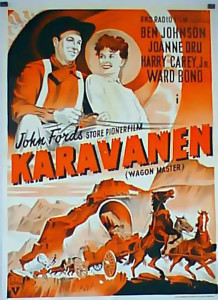 A Swedish Kit Carson, and a German Wagon Master.

The Outriders—Joel McCrea (1950).  As the Civil War draws to an end, Confederate scout Joel McCrea helps a wagon train laden with secret gold make its way back up the Santa Fe Trail.

*Westward the Women—Robert Taylor (1951; Dir: William Wellman).  Robert Taylor is the wagon master taking a train full of women to California to find new lives and new husbands in this surprisingly good western.

Passage West–John Payne (1951; Dir:  Lewis R. Foster).  In 1863, six convicts led by John Payne escape from a Salt Lake prison and take over a wagon train headed to California across the desert.

Arrow in the Dust–Sterling Hayden (1954; Dir:  Lesley Selander).  Fake cavalry officer Sterling Hayden fights off Indians while trying to get a wagon train to Fort Laramie.

The Last Wagon—Richard Widmark (1956; Dir: Delmer Daves).  Most of the wagon train has been wiped out by Indians, but luckily the few young survivors have Richard Widmark to get them through inhospitable terrain.

The Tall Stranger–Joel McCrea (1957; Dir:  Thomas Carr).  Returning from the Civil War to his brother’s valley in Colorado, Joel McCrea encounters a wagon train led by a land-grabber and rustler.  But on the good side, it has Virginia Mayo.

Thunder in the Sun–Susan Hayward, Jeff Chandler (1959; Dir:  Russell Rouse).  A group of French Basque immigrants make their way across the country to California in 1850, with the guidance of old scout Jeff Chandler..

How the West Was Won (1962; Dir: Henry Hathaway et al.).  A large-scale epic with a little of everything, including wagon trains.

Buck and the Preacher–Sidney Poitier, Harry Belafonte (1972; Dir:  Sidney Poitier).  A former slave and buffalo soldier, Sidney Poitier now guides wagon trains of blacks headed west.  But they have to fight off night riders and those who would head them back to the south.

*Silverado (1985; Dir: Lawrence Kasdan).  Most elements of traditional westerns, including a wagon train of emigrants, show up in this entertaining modern western.

The Donner Party (2009).  A cinematic version of the story of the doomed emigrant party now remembered principally for cannibalism when it was snowbound in the Sierra Nevadas.

Meek’s Cutoff (2011).  A wagon train is misled in Oregon by a feckless mountain man-scout but rescued by strong-minded women (especially Michelle Williams) in this fact-based feminist drama. 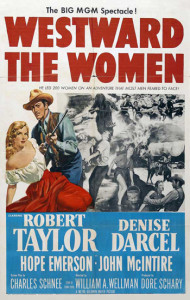 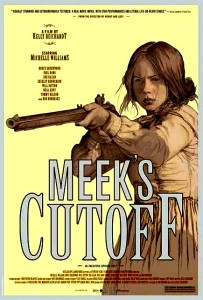