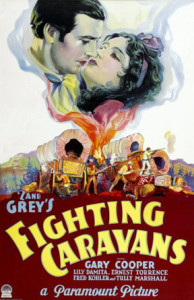 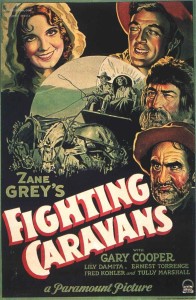 During the first half of the 20th century, Ohio-born dentist Zane Grey was the best-selling author of wildly popular novels, most of them set in the American west.  Beginning with Riders of the Purple Sage in 1912, the public had an apparently unquenchable appetite for his stories.  His 1929 novel Fighting Caravans was hot off the presses when this western was made based on it.  In all, as of 2012 112 western movies had been based on his works.

In 1931, Gary Cooper was an up-and-coming star in Hollywood at the age of 30.  His breakthough had come in 1926’s silent movie The Winning of Barbara Worth, a sort of western about the reclamation of California’s Imperial Valley.  He had always done westerns, including early sound versions of The Virginian (1929, now thought to be lost) and The Spoilers (1930), among others.  In 1930 he had appeared as the romantic lead in the popular Morocco, along with Marlene Dietrich.  Cooper had made it.  He was the biggest name in Fighting Caravans.  In the early sound era of the 1930s, most westerns were B-movies, quickly and cheaply made with poor writing and routine direction.  They had no cinematic prestige.  Fighting Caravans was more ambitious, shot on location in Sonora, California, with a big star like Cooper. 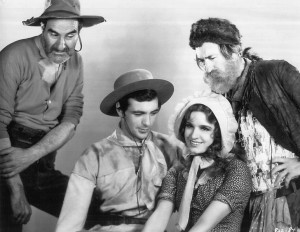 Bill Jackson (Ernest Torrence, left) and Jim Bridger (Tully Marshall, right) connive to get Clint (Gary Cooper) and Felice (Lili Damita) together and then to keep them apart.

In the Civil War era (1862), a wagon train is about to leave Independence, Missouri, bound for Sacramento in California.  Scout Clint Belmet, who tends to drink too much and raise hell in a recreational sort of way, is being held by the local marshal.  Belmet’s mentors, old scouts Bill Jackson (Ernest Torrence) and Jim Bridger (Tully Marshall) persuade Felice (Lili Damita), a young French woman with a wagon train that is about to leave, that she will be left behind if she has no man to help her, so she tells the marshal that she and Belmet were married the previous night.  Belmet is released, and he and his two older friends arrange to scout for Felice’s wagon train.

Although he is not interested in marriage, Belmet finds that he is interested in Felice.  The old scouts scheme to break them up, so Belmet will maintain his freedom and remain with them.   Ultimately, Felice and Belmet have a falling-out over his refusal to contemplate marriage and family life.  Meanwhile, the wagon train is hounded by Kiowas, which is unusual on the Oregon-California Trail; the Kiowas ranged farther south and were much more likely to be found in the areas of Texas, Oklahoma and New Mexico, near the Santa Fe Trail.  Belmet leaves the wagon train because of Felice, but he, Jackson and Bridger rejoin it when they see an Indian attack coming, inspired by white renegades. 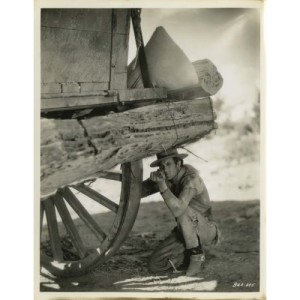 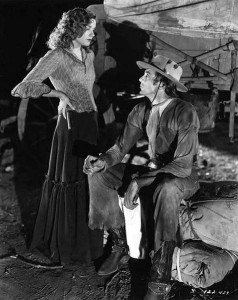 Bridger and Jackson are among those holding off the Indians at a river crossing while the last of the wagons get over.  They are killed, but Belmet scares off the Indians by exploding a wagonload of gunpowder.  Later, Felice loses control of her wagon heading down a steep incline, and Belmet saves her.  The train makes its way over snowy passes and finally to its destination, where we get the following sophisticated multilingual exchange: 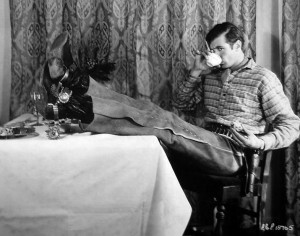 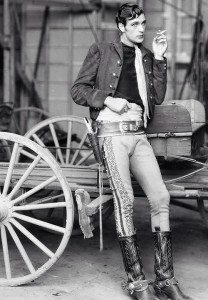 A couple of shots of Cooper behind the scenes.

The obvious comparison for this film is with The Big Trail, made the previous year with larger-than-usual ambitions.  Both are wagon train westerns from the early sound era, with virtually the same plot–getting from Missouri to northern California, with a young scout.  The Big Trail, in which director Raoul Walsh was experimenting with making a 70 mm. movie, bombed at the box office because theaters didn’t have the equipment to show it, but it was superior visually.  Fighting Caravans, with its more prominent star, did much better commercially.  The Big Trail was supposed to make John Wayne a star; it didn’t because few saw it, but he wasn’t bad.  Compare his straight-ahead acting with the hokiness of Gary Cooper in Fighting Caravans, although some of that is the result of the writing.  Tully Marshall plays the scout/wagonmaster’s mentor in both films, but he’s more significant in The Big Trail.  Film technology of the early sound era makes both movies seem somewhat dated, but the dialogue and social attitudes (heavy recreational drinking as one of life’s prime objectives, for example) of Fighting Caravans have aged more.  There’s a certain amount of overacting in both.  The lively Lili Damita (who became Errol Flynn’s first wife in 1935) is more interesting than Marguerite Churchill as the romantic object of John Wayne’s attentions in The Big Trail.  Taken as a whole, The Big Trail is longer, better and more significant in the history of western movies.  The principal reason for watching Fighting Caravans now is to see Gary Cooper, one of the greatest of western stars, in the early stage of his career. 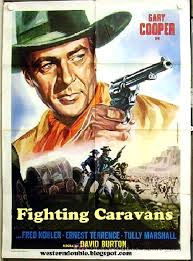 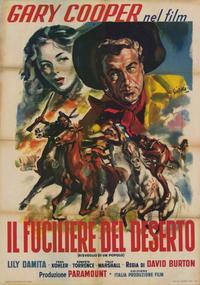 Lili Damita joins a string of French women in westerns:  Denise Darcel in Westward the Women (1951) and Vera Cruz (1954), Nicole Maurey in The Jayhawkers (1959), and Capucine in North to Alaska (supposedly from New Orleans), 1960.  She can hold up her head in that company.  Gravel-voiced Eugene Pallette, who would show up later in the decade as Friar Tuck to Errol Flynn’s Robin Hood and a Mexican soldier in The Mark of Zorro, is mild comic relief here.

The original title of the production was Blazing Arrows.  Three years later, a lower-budget remake was released as Wagon Wheels, using stock footage from Fighting Caravans and with Randolph Scott in the Clint Belmet role.  Filmed in black and white on location near Sonora, California, at 81 minutes.