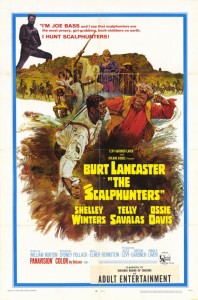 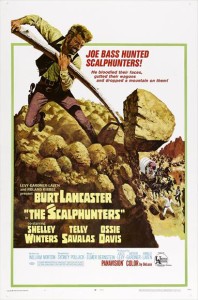 This is one of two western comedies from the late 1960s-early 1970s that uses slavery as a critical element of its plot.  The other is Skin Game, and in both cases the slave in question is something of a con man who gets by in dicey circumstances by outsmarting everybody else.

Fur trapper Joe Bass (Burt Lancaster) is making his way to sell his winter’s catch of pelts, when he encounters old acquaintance Kiowa chief Two Crows (Armando Silvestre).  Two Crows and his Kiowas make off with Bass’ furs, but not without making a trade of sorts.  They give him Joseph Winfield Lee (Ossie Davis), whom they have captured from the Comanches.  Lee turns out to be very well-educated, able to read, write, cipher and quote Latin; in fact, he is much better-educated than the Massachusetts-born Bass, who is illiterate.

As Lee explains matters to Bass, he has run off from Louisiana, hoping to reach Mexico, where there is no slavery.  He had fallen in with Comanches and keeps arguing that he is a Comanche, but had the misfortune to be captured by Kiowas, who have now traded him to Bass.  Bass has no use for a slave but figures he can recoup something by selling Lee in St. Louis.  Bass may not have much book learning, but he’s a masterful fighter and tactician, and he can live off the arid lands of the west.  Bass and Lee banter back and forth, while they follow the Kiowas.  Bass knows there’s a cask of whiskey in with his furs and figures to take back the furs as soon as the Indians incapacitate themselves with the whiskey.

It almost works, but just as Bass and Lee are about to make their move, the Kiowas are slaughtered by a group of scurrilous scalphunters led by Jim Howie (Telly Savalas).  In addition to killing the Indians for the $25 bounties their scalps will bring, they make off with Bass’ furs.  Only Two Crows escapes.  Bass and Lee follow the scalphunters.  As they spy on them, trying to figure out how to get the furs, Lee falls down a steep escarpment and is captured by the scalphunters.

Jim Howie plans to sell Lee in Galveston on their way to Mexico.  Lee ingratiates himself with Howie’s woman Kate, hoping to make himself indispensable enough that they’ll take him to Mexico.  Bass ambushes the scalphunters and orders them to leave the mule with the furs behind while they move on; he kills the two scalphunters Howie orders to flank him.  But the mule runs off and is taken by the scalphunters again.  Bass orchestrates a landslide that takes out several of the scalphunters, but they manage to hang onto the furs. 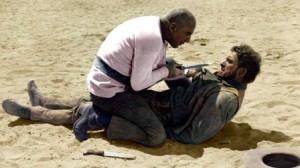 Jim Howie (Telly Savalas) thinks he finally has Joe Bass (Burt Lancaster) where he wants him.

When the scalphunters are about to make a stop, Bass puts loco weed in the water their horses will drink.  He ridicules Lee for not being able or willing to fight, and Howie has set a trap for Bass.  As the Bass and Lee argue and brawl, Howie springs out of hiding with a gun.  Lee grapples with him and in the struggle it goes off; Lee is the survivor.  As Bass and Lee continue their interminable fight, Two Crows shows up and takes over the furs and Kate, killing the few remaining scalphunters. As Bass and Lee ride off on Bass’s horse, Lee points out that the scalphunter wagon has Howie’s drinking whiskey, and that by nightfall the Kiowas should be quite drunk.

Director Sydney Pollack only made two westerns.  This was the first; the second (and better) one was Jeremiah Johnson in 1972, with Robert Redford.  Lancaster and Ossie Davis are quite good.  The movie depends on their relationship, and it works well.  Telly Savalas had a modest career as a heavy in movies (McKenna’s Gold, for example) before moving on to become a cop as television’s Kojack.  Shelley Winters was excellent casting as as Howie’s blowzy companion, given to singing Mormon hymns on Sunday mornings.  One anachronism sticks out:  in the pre-Civil War period of this movie, Joe Bass sports a repeating rifle, which would not then have been available.  The fights become a little tiresome. 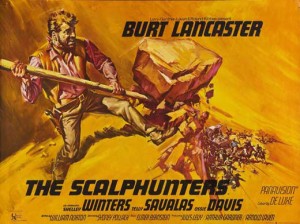 Shot in color on location in Durango, Mexico.  At 102 minutes, it seems a slight film that doesn’t stick in the memory long.  Music is by prolific movie composer Elmer Bernstein.  The unusually literate script is by William Norton.  For another western featuring slavery, see Quentin Tarantino’s Django Unchained, which has a few comic moments but is not generally a comedy.  To see Burt Lancaster in another comedic western role, check out The Hallelujah Trail (1965).