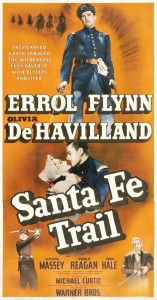 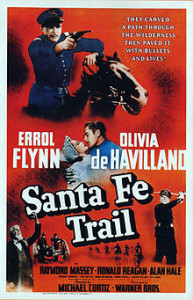 Around 1940, the dashing Errol Flynn was the star of several good westerns:  Dodge City (1939), Virginia City (1940) and They Died With Their Boots On (1941) are the best known.  Two of these were directed by Hungarian Michael Curtiz, the director most closely associated with with Flynn. Olivia de Havilland and Flynn formed one of the greatest romantic on-screen partnerships from the golden age of Hollywood, and this was the seventh of their nine movies together.  And Alan Hale and Guinn “Big Boy” Williams (a frequent drinking partner of Flynn’s) had appeared in several movies with Flynn (Robin Hood, Dodge City, Virginia City), mostly as quasi-comic relief.  Clearly Warner Bros. was hoping a formula that had worked before would produce box office gold again.

This one has nothing to do with Santa Fe and little to do with the famous Santa Fe Trail.  It should have been titled “Chasing John Brown.”  In 1854, the arguments over slavery that had led to the new potential state being called “Bleeding Kansas” were also manifest among the cadets at West Point.  Rader (Van Heflin) is taken with the sentiments of the fiery abolitionist John Brown; he is opposed, both personally and politically, to J.E.B. Stuart (Errol Flynn) of Virginia.  Stuart is supported by several other cadets, including George Custer (Ronald Reagan), Phil Sheridan, George Pickett, John Bell Hood and James Longstreet (all names that will become famous as generals in the upcoming Civil War).  When Rader and Stuart are involved in a fight, West Point Superintendent Col. Robert E. Lee (character actor Moroni Olsen) banishes Rader for his divisive political activities.  Stuart and his friends are punished by being sent to the most dangerous duty in the army at that time:  the Second Cavalry at Fort Leavenworth in Kansas.  They don’t mind at all. 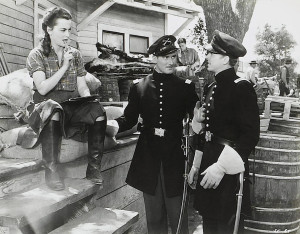 Leavenworth is the western terminus of the railroad, although stage magnate Cyrus Holliday hopes to build toward Santa Fe when it is safe enough.  It isn’t yet, partly because of Indians but mostly because of John Brown and his strikes against supporters of slavery, such as the notorious raid on Ossawatomie.  Part of the Second Cavalry’s mission is to disband any armed groups, like Brown or his opponents.  Stuart and Custer are both interested in Holliday’s daughter Kit Carson Holliday (Olivia de Havilland), and are detailed to join a detail protecting a Holliday freighting column bound for Santa Fe.  A couple of days out, they encounter a Mr. Smith, who wants to take delivery of eight crates of Bibles.  One of the crates is dropped and breaks open, revealing rifles instead of Bibles.  Mr. Smith is in fact John Brown, and one of his men is the disgraced Rader.  As Brown and his men make their getaway (with some of the rifles), Brown’s young son Jason (Gene Reynolds), driving a wagon, is shot by Rader in the melee.

Back in Leavenworth, Jason reveals the location of Brown’s base in Palmyra before dying.  As Stuart investigates out of uniform, he is captured in Palmyra by Brown’s men.  He is about to be hung by them, when he grabs a gun and ducks into the barn where Brown-liberated black former slaves (Negroes, as they were called in 1940) are housed.  Stuart is being blasted from all sides and a lantern is shot, spilling flames all over the barn.  (We can see that Brown apparently doesn’t care what happens to the innocent blacks in his anger at Stuart.)  Stuart is rescued by the appearance of the rest of his detail, led by Custer, and Brown decides his work in Kansas is done, riding off to the east with his men. 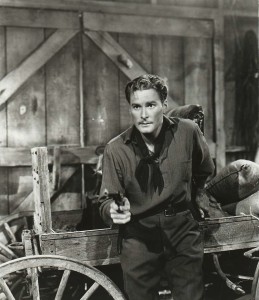 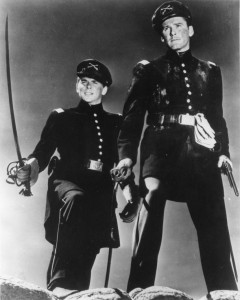 Stuart (Errol Flynn) fights John Brown in a fiery barn; and a still of Custer (Reagan) and Stuart (Flynn) in uniform.

Back in Leavenworth, both Stuart and Custer press their suits with Kit, and Stuart is the winner.  An old Indian woman at the fort makes dark prophecies about the future of the six friends and divisions and battles among them.  Stuart and Custer are both promoted to captain and head off to an assignment in Maryland, where their new commanding officer is Col. Lee again.

In Maryland Rader comes to the army, disillusioned with Brown because he hasn’t been paid for his military expertise as Brown promised.  Rader warns of Brown’s plans to take over the weapons from the arsenal at Harper’s Ferry.  Because of the warning, Lee and his men are able to arrive in time to capture Brown in the act.  During a battle in which the army uses artillery to knock holes in the arsenal building, Brown kills Rader as a traitor.  (We knew he was going to die, with his conflicted loyalties).  John Brown is captured and hung, Stuart and Kit are married, and even Custer has a new girl friend.  The army friends ride off to an uncertain future in the Civil War, fighting on opposite sides.

Flynn and De Havilland make their usual charming couple.  De Havilland’s lively attractiveness reminds us that this kind of role usually passes unnoticed, but she does it unusually well.  Ronald Reagan, a perennial best friend to the lead in movies, is adequate if a bit light-weight as a fictional Custer.  The excellent character actor Moroni Olsen brings an appropriate gravitas to his role as Robert E. Lee.  Van Heflin isn’t bad in an early role as a villain who reforms, in the sort of role often played by Arthur Kennedy.  Heflin would graduate to more sympathetic parts eventually.  Ward Bond has a scarcely noticeable role as one of Brown’s men. 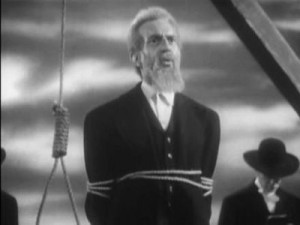 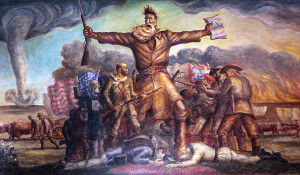 The most memorable role in the film is Raymond Massey as John Brown, with his appearance and manner reminding us of the famous painting by John Steuart Curry from about the same time.  It was a natural role for Massey, and he would star as John Brown again in Seven Angry Men (1955), the main story of which is also the trial and hanging of the abolitionist.  Kansas slavery politics sound muddled here, although it is clear that John Brown is a bad guy, even if his heart is in the right place about the abolition of slavery.  He’s just too willing to use the sword on anybody who believes differently or crosses him.  Stuart is not all that convincing in his view that all the South needs is time and it will get rid of slavery on its own.  As in William Butler Yeats’ poem The Second Coming,
“The best lack all conviction, while the worst
Are full of passionate intensity.”

1941’s They Died With Their Boots On was wildly inaccurate historically but enjoyable to watch, with Flynn playing Custer and De Havilland as his wife Libby in their last movie appearance together.  This is even more inaccurate, and slightly less watchable.  Of the six army friends in this film, only Stuart was actually in the West Point class of 1854, although it did include Robert E. Lee’s son George Washington Custis Lee (an eventual Confederate general) and Oliver O. Howard (ultimately a Union general).  Of the six supposed West Point friends depicted in the film, only Stuart did not survive the Civil War, although Custer famously met his own ignominious end at the Little Bighorn in 1876. 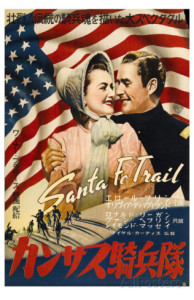 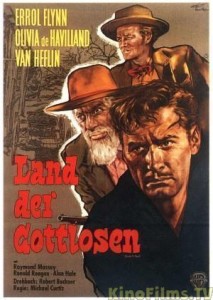 Filmed in black and white, at 110 minutes, although there is a cut of only 93 minutes.  Music is by Max Steiner.