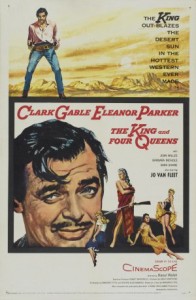 In 1956, Clark Gable was 55 and his career was fading after 25 lustrous years in Hollywood.  MGM had not renewed his contract, and he was scrambling for work.  This was the second of three westerns he made with director Raoul Walsh, between The Tall Men and Band of Angels (a Civil War movie set in and around New Orleans).  He had long been known as the King in Hollywood, but that was becoming less true.

At the start of the movie, gambler Dan Kehoe (Clark Gable) is on the run from a posse and gets away only by riding down steep hills where they won’t go.  He finds himself in the town of Touchstone in the southwest, where he hears about the McDade family of outlaw brothers, based at a nearby ranch called Wagon Mound.  After pulling off a bank robbery for $100,000, the four brothers had been trapped in a barn.  In the following melée and fire, three of the brothers were burned to death, but one escaped with the loot.  Nobody knows who the surviving brother was.  Since then, the remaining inhabitants of Wagon Mound shoot anybody who approaches the ranch. 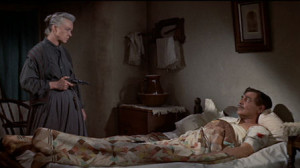 More than a bit of a con man, Kehoe smells a situation he can play to his advantage.  He rides up to Wagon Mound, ignoring the signs telling him to stay away, and is promptly shot by Ma McDade (Jo Van Fleet)—just a shoulder wound, though.  He awakens in a ranch house, tended by Sabina McDade (Eleanor Parker), wife of Boone, and quickly meets Ruby (Jean Willes), wife of Roy, Oralie (Sara Shane), wife of Matt, and Birdie (Barbara Nichols), wife of Prince McDade. They’ve been at the ranch for two years, waiting to find out whose husband survives and to split up the loot when the survivor returns.  The local sheriff is keeping watch for the wanted survivor, too.  There’s a reward of $5000 for him, and $5,000 for the return of the stolen gold.

Strong-willed Ma wants to get rid of Kehoe as quickly as possible, but he helps them by backing off the sheriff and a posse when they come to Wagon Mound.  He tells the sheriff he’ll find the gold and ring a mission bell when the surviving McDade shows up.  Then he tells Ma what he’d told the sheriff, and she agrees to let him stay until the rains come, as they will shortly.  He spends the time getting to know all four of the daughters-in-law, who are intrigued/attracted by the new man in their midst.  The none-too-bright Birdie has a stage background in Chicago.  The dark Ruby (she wears red) has always used a sexual combustibility to control men. The prim and repressed Oralie has her own quieter attractions.  And the intelligent, red-haired Sabina is biding her time and is more careful with Kehoe.  They all want to get out of there and get on with their lives, and three of them do their best to seduce Kehoe.  Ma doesn’t trust him at all, nor does Sabina.

[Spoilers follow]  Ma is right not to trust Kehoe.  He watches until he thinks he has identified where the gold is hidden in a grave.  As the rain comes and he must leave, Kehoe makes a run for it with Sabina and the gold in a wagon.  But before they’re out of sight of the ranch, Ma rings the bell, bringing the sheriff (unreasonably quickly, it seems).  Kehoe sends Sabina on with $5000 and stays behind to give the rest of the gold to the sheriff, telling them he’s keeping $5000 as the promised reward.

As Kehoe looks to meet Sabina at their rendezvous point, the priest who had been keeping Kehoe’s money says he gave it to Sabina, who had told him she was going south.  But her wagon went in another direction, and Kehoe follows that.  He finds Sabina waiting for him on the trail.  She tells him Boone was the surviving brother, and she met him (and did not marry him) the night before he was killed.  Pretending to be Boone’s wife, she’s been waiting for a split of the loot.  None of the outlaw McDade brothers survive.  She and Kehoe ride off together into the sunset.

The King and Four Queens was the first (and last) project from Gable’s own production company, GABCO.  Gable has the kind of presence to pull off this role, even if he was getting long in the tooth and had to crash diet to get in shape for it.  Eleanor Parker was the biggest other name in the cast, and she’s good.  During a brief heyday of several years in the 1950s, she appeared in three westerns:  Escape from Fort Bravo with William Holden (1953, the best of them), Many Rivers to Cross with Robert Taylor (1955) and this one.  The other “queens” in the cast are not particularly memorable, although they do well enough.  Jo Van Fleet, who is persuasive as Ma McDade, was actually 14 years younger than Gable.  She also turned in a good performance the same year as Doc Holliday’s girl friend Kate Fisher in Gunfight at the OK Corral.  The film as a whole is watchable but not terribly memorable.

The principal writer was Margaret Fitts, who also wrote the very good Stars in My Crown (1950); unfortunately the writing is not strong here.  Excellent cinematography in color by Lucien Ballard; shot on location in southern Utah.  86 minutes long. 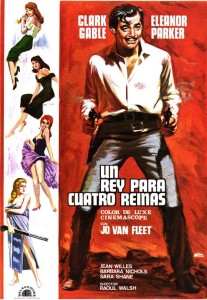 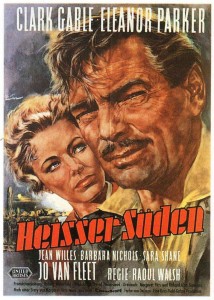 The posters showing Gable in a gunfighter’s stance are inaccurate; he doesn’t use guns much in this movie.  A version of this story, with multiple parties trying to find the loot of three deceased outlaw brothers by following and otherwise harassing their attractive young widows was made in 2006 with more of a feminist twist as The Far Side of Jericho.  This original was better.