It’s a stretch to call these “westerns” in the usual sense, since geographically they mostly take place somewhere east of the Mississippi—or even in eastern Canada and Paraguay (South America) in the case of Black Robe and The Mission.  They take place earlier than 1800.  But they are all stories set on the frontiers of their times, involving contact with often-hostile Indians and the hardships of life on the frontier, in a largely untamed natural setting.  They take place in the “west” of their times, on the frontier where white settlers are few and the interface with Indians is critical to their survival.  To sum up, then, these all (1) take place during the colonial era of their respective nations’ history (before 1800, in the case of the U.S.); (2) are set on the frontier of their respective colonies at the time, usually a western frontier; and (3) almost invariably involve Indians, usually as the primary antagonists. 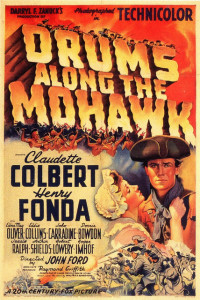 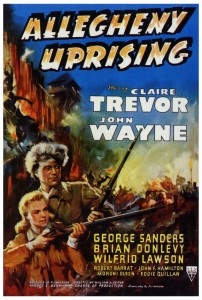 Last of the Mohicans (1920 and 1936)  A story based in upstate New York during the French and Indian War, around the British surrender of Fort William Henry in 1757 to the French and its aftermath.  Based on the famous 1826 novel by James Fenimore Cooper.

Drums Along the Mohawk (1939)  Takes place in upstate New York during the American Revolution (specifically, the Battle of Oriskany), showing the effects of Indian warfare on the settlers, including Henry Fonda and Claudette Colbert.  Based on the 1936 bestseller by Walter Edmonds, directed by John Ford.

Allegheny Uprising (1939)  A story set in Pennsylvania, based on the uprising of James Smith (John Wayne) and his Black Boys in 1760.  They fight the British authorities more than they do Indians.

Northwest Passage (1940)  Set in the French and Indian War, this is mostly the story of Roberts’ Rangers (led by Spencer Tracy) and their raid on the Abenaki settlement of St. Francis in what is now eastern Canada.  Based on the 1936 bestseller by Kenneth Roberts.

Unconquered (1947)  Indian warfare in the area of Fort Pitt (Pittsburgh) in western Pennsylvania in 1763, with Gary Cooper and Paulette Goddard fighting Guyasuta’s Iroquois.  Based on Niel Swanson’s novel The Judas Tree.

Last of the Redmen (1947)  First color version of Last of the Mohicans, with Jon Hall as Major Duncan Heyward and Michael O’Shea as a chatty, Irish-accented Hawkeye.  Buster Crabbe is the villainous Magua.

Rachel and the Stranger (1948)  Takes place at an unspecified time either before or after the Revolution (probably after) in an unspecified Kentucky-Ohio frontier area; mostly a domestic melodrama but also with some fighting of Shawnees.

Many Rivers to Cross (1955)  On the Kentucky-Ohio frontier after the Revolution, with fur hunter Robert Taylor and liberated Eleanor Parker fighting Shawnees and each other.  Based on, but more comic in tone than, a novel by Steve Frazee.

The Last Tomahawk (1965)  German version of Last of the Mohicans.

Guns for San Sebastian (1967)  A Franco-Mexican production set in northern Mexico of 1746.  Murderer, thief and deserter Anthony Quinn impersonates a priest and defends the village of San Sebastian against hostile Yaquis and Charles Bronson.

The Mission (1986)  Written by English playwright Robert Bolt, this is the story of Spanish Jesuits in South America trying to prevent a remote Indian tribe in Paraguay from falling under the rule of pro-slavery Portugal.  With Robert De Niro and Jeremy Irons.

Black Robe (1991)  The story of a young Jesuit priest on a mission among the Hurons of eastern Canada in the early colonial period of the 1600s.  Based on a novel by Brian Moore.  Not a peaceful tale, although the principal white character is a priest.

Last of the Mohicans (1992)  An updated version of James Fenimore Cooper’s venerable 1826 tale of the French and Indian War, told this time with modern cinematic tools, standards and actors, including Daniel Day Lewis and Madeleine Stowe.

The New World (2005)  Terence Malick’s story of the settlement of Jamestown in the early 1600s by the English, and their relations with the Powhatan Indians of Virginia, including Pocahontas.  Stars Colin Farrell as Capt. John Smith and Christian Bale as John Rolfe.  Well-received by reviewers and cineastes, but slow going for regular audiences. 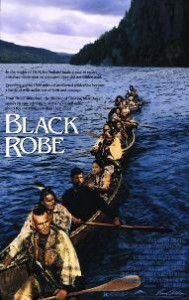 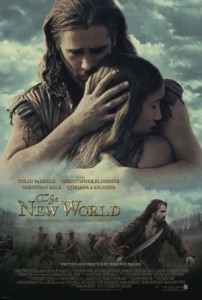