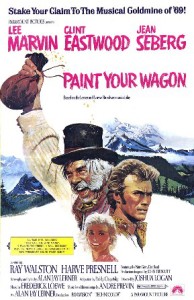 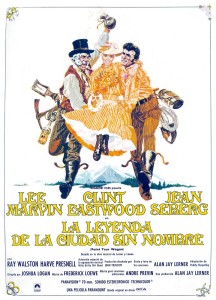 Of course Lee Marvin and Clint Eastwood are naturals for westerns, but for musicals?  Not so much.  So the question for Paint Your Wagon is:  Is it more a western or more a musical?  Despite the fact that it has Broadway star Harve Presnell (as gambler Rotten Luck Willie) on hand to sing the major musical number “They Call the Wind Maria,” Presnell’s big-time voice simply emphasizes that Marvin, Eastwood and Jean Seberg (whose singing is dubbed but still not impressive) are not really singers themselves.  The musical numbers mostly aren’t terribly memorable or well sung, but this isn’t very satisfying as a western, either.

By 1960, Alan Jay Lerner (the lyricist) and Frederick Loewe (the composer) were the apparent successors to Richard Rodgers and Oscar Hammerstein II as the pre-eminent team turning out musicals for the stage and movies (My Fair Lady, Gigi, Brigadoon, Camelot).  Josh Logan, as a director, was known principally for his work in big stage and movie plays and musicals.  By the end of the decade, though, large-scale movie musicals were becoming an endangered species despite the success of Funny Girl (1968), and Paint Your Wagon and Hello, Dolly represented the last gasp of the genre.  This is perhaps the least memorable of all the movies made of Lerner and Loewe musicals.  And the American public seemed to be losing its taste for such things in any event. 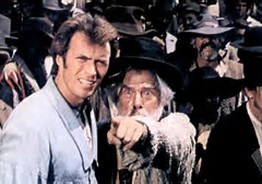 In the gold country of northern California, statehood seems imminent, so it is about 1850.  A landslide kills a Michigan farmer making his way to the goldfields and injures his brother (Clint Eastwood).  As Ben Rumson (Lee Marvin) and others prepare to bury the deceased brother, they discover gold in the grave.  A mining camp (No Name City) springs up on the site, and Rumson and the brother, known only as Pardner, become partners in a gold claim.

Jacob Woodling (John Mitchum), a Mormon with two wives, is passing through; they are enthralling to the exclusively male inhabitants of No Name City.  The wives don’t get along and the Woodlings need money, so Jacob is willing to auction off the younger wife, Elizabeth (Jean Seberg), with her consent.  An inebriated Ben Rumson buys her for $800, and she agrees to the arrangement if he’ll build her a permanent cabin.  He does. 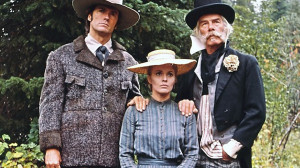 In order to divert unwanted attention from his wife, the only woman in the vicinity, Rumson leads an expedition to hijack a stage carrying six “French bawds.”  They set up an establishment in No Name City and the settlement grows like a weed.  While Rumson was gone, Pardner and Elizabeth formed a relationship, and Rumson, Pardner and Elizabeth become a more or less comfortable threesome.  But matters are complicated by the arrival of a preacher, and by the Fentys, a farming family recovering after a near-death experience while trapped in the mountains.  They are staying at the Rumson cabin and are religious people who would be horrified at the unorthodox relationships in the household.  So Ben moves (temporarily) to accommodations in town, while he corrupts the Fenty’s son Horton (Tom Ligon), who takes readily to liquor, gambling and loose women.

[Spoilers follow.]  Meanwhile, Ben and Mad Jack Duncan (Ray Walston) tunnel under the establishments in town in order to get the gold dust that falls through the floorboards.  With Rumson and Duncan having honeycombed the town with tunnels, those tunnels and the town itself begin to collapse during a large bull vs. bear sporting event.  Rather than rebuild, most of the inhabitants of No Name City decide to move on, including Ben Rumson.  Elizabeth has always been adamant that she wants to stay permanently with her cabin, but after the influence of the Fentys she is no longer comfortable with her former domestic arrangements.  But Pardner stays with her, and with the departure of Rumson her situation becomes more conventional.  His name turns out to be Sylvester Newel, although he is still addressed as Pardner. 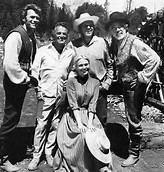 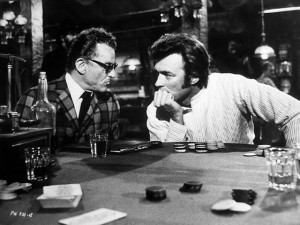 The cast and director behind the scenes during filming; Alan Jay Lerner chats with Clint Eastwood.

The play was first produced on Broadway in 1951 and took eighteen years to make its way to film.  It was not thought to represent Lerner and Loewe’s very best work.  The film is said to bear little relation to the original play, however.  After the success of several musical films in the 1960s, most notably My Fair Lady (1964) and The Sound of Music (1965), producers went looking for other projects to make, and the idea of Paint Your Wagon was revived for consideration.  The original plot, about an inter-ethnic love story, was discarded as being too dated.  The only elements retained from the original were the title, the Gold Rush setting and about half of the songs. In the play, Elizabeth has a very minor role, Pardner does not even appear, and Ben Rumson dies at the end.

There was a lot of talent at work on this film, with a big budget that unintentionally got bigger as production went along.  In addition to director Logan and the Lerner-Loewe team, the principal writer in adapting Lerner’s screenplay was Paddy Chayefsky.  Additional music is by André Previn, and Nelson Riddle and Roger Wagner conducted.  Incidental music is provided by the Nitty Gritty Dirt Band, whose members show up as extras and townspeople.  The movie was sumptuously shot by William A. Fraker near Baker, Oregon, and Big Bear Lake in California, and it’s long at 158 minutes (more than two and a half hours).  It often feels slow, with excessive drunken roistering by Rumson.  The collapsing tunnels and town sequence takes too long and is too elaborately staged.  (“Over-produced” is the term Roger Ebert used.)  The central conflict, with the evolution of Elizabeth’s domestic arrangements, does not feel all that organic or convincing.  For a fan of westerns, the principal interest in this is as a curiosity, to watch Eastwood and Marvin, both normally excellent actors, out of their element in a musical.  Although he appears much older in the film, Marvin was in fact only six years older than Eastwood at the time.  Marvin’s version of “Wand’rin’ Star” rose to No. 1 on the charts in the U.K., strangely enough. 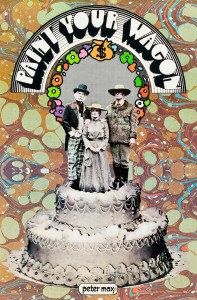 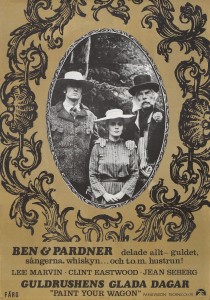 Relics of another era:  A poster by psychedelic master Peter Max; and a Swedish poster.

Lee Marvin was set to star in The Wild Bunch, but Paramount offered him $1 million plus a percentage to star in this one instead.  Apparently Josh Logan found Lee Marvin’s drunken roistering excessive as well, especially that not captured on film.  Unlike normal film practices, the liquids Marvin consumed on film were mostly actual liquor.  “Not since Attila the Hun swept across Europe, leaving five hundred years of total blackness, has there been a man like Lee Marvin,” according to Logan.  Eastwood and Seberg, both married to other parties at the time, engaged in an intense affiar during filming.  Eastwood apparently found it easier to walk away from than Seberg did.

For another western comedy that starts with the discovery of gold in a grave, see Support Your Local Sheriff (also 1969).