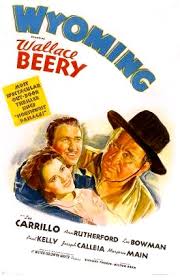 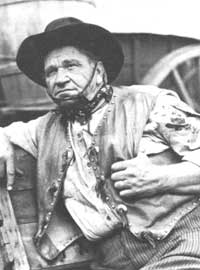 This is a Wallace Beery vehicle, with Beery doing his patented old-cuss-goes-straight-through-love-of-a-child shtick, which had worked so well in The Champ with Jackie Cooper almost a decade earlier.  This time it’s set in the west, in Wyoming, to be exact.  George Custer is still alive, so it’s 1876 or so.  And Custer is still a hero, as he would be in the biopic They Died With Their Boots On (where he was played by Errol Flynn), released about the same time.  This is also the first cinematic pairing of Beery and Marjorie Main as a quasi-romantic cantankerous older couple, which they would repeat in Bad Bascomb, among several other films.  It is also a range war story, with Sitting Bull’s Sioux thrown in for good measure.

Reb Harkness (Wallace Beery) and his partner Pete Marillo (Leo Carillo) are former Confederates who have had to flee Missouri, where they are wanted.  Moving west, they rob trains but make the mistake of robbing one carrying Col. George Custer (Paul Kelly) and the officers of the 7th Cavalry, who give pursuit.  Pete takes Reb’s horse and all the money, and Reb falls in with returning Confederate Dave Kincaid, heading for his ranch in Wyoming.  (One has no idea what Kincaid has been doing in eleven years since the end of the Civil War, but he’s still wearing parts of his uniform.) 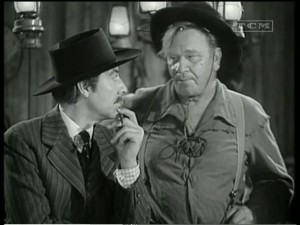 Reb in turn takes Dave’s horse and equipment as they get close to the ranch.  Dave happens upon horsemen making off with his cattle and is shot down.  Hearing the shots, Reb turns back and finds Dave’s body.  He takes it to the ranch, where he meets Dave’s daughter Lucy (the young Ann Rutherford) and young son Jimmy (Bobs Watson).  He also meets, and is taken with, Mehitabel (Marjorie Main), the local blacksmith’s sister.  The town and the Sweetwater Valley are increasingly controlled by John Buckley (Joseph Calleia), who feels free to make off with any cattle in the vicinity and wants to acquire all the land.  Reb hopes to even things by robbing a stage with several of Buckley’s men, returning after selling the Kincaid cattle.  In a shootout, Reb kills them all; he gives the money to Lucy.  When Mehitabel shoes his horse, Reb is even more infatuated with her.

The ineffective sheriff (Henry Travers) is under the control of Buckley; he jails Reb when Reb is captured by Custer and his men.  Reb manages to escape without being shot down as Buckley planned, hiding out at the Kincaid Ranch.  Meanwhile, Buckley manages to get Custer ordered to Laramie while he finishes stealing all the valley’s cattle.  Reb leads the ranchers in taking them back, and Buckley retaliates by offering Sitting Bull’s Sioux guns for taking care of Reb and his allies.  As they are besieged on the Kincaid Ranch, Custer and the cavalry ride to the rescue.  They take Buckley into custody, and look the other way with Reb.  So Reb appears to get away with his previous life of crime, unlike most movies of the time.  Custer says he’s off to the Little Bighorn to deal with Sitting Bull, and we know how that ends. 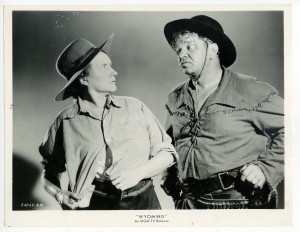 Beery was a decent actor, as demonstrated by his ability to depict good relationships with children despite the fact he couldn’t stand them and treated child actors badly.  Eighteen-year-old Ann Rutherford, who had been a child actor, was doing ingenue roles in Andy Hardy movies and playing Scarlett O’Hara’s sister in Gone With the Wind.  She did not get along well with Beery, either, but he was a much bigger star.  This kind of story played better in the 1940s than it does now, and the aging Beery (then 55) played variations on it for the rest of his career.  Malta-born Joseph Calleia was a good actor who often played villains in movies; he has better material in Four Faces West and Branded, however, where he played more ambiguous characters.  The blacksmith Lafe is played by an uncredited Chill Wills.  An alternative early title was Bad Man of Wyoming, simplified to just Wyoming.

Director Richard Thorpe had made 50 silent westerns and worked on into the 1960s.  MGM put more money into the production of this film than it did into most westerns, and it was shot on location in Jackson Hole, Wyoming.  In plot and location, this has eerie similarities to Shane more than a decade later. And it also has similarities to Beery’s own Bad Bascomb (1946) with Margaret O’Brien and Marjorie Main, also shot in Jackson Hole.  To modern audiences it seems kind of old-fashioned, and not just because of the cinematic technology of 1940.  In black and white, at 88 minutes. 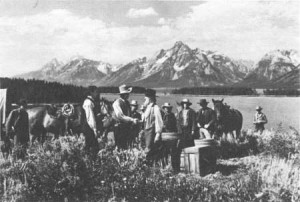 The earliest western shot in Jackson Hole is said to have been the silent movie The Cowboy and the Lady (1922), with ingenue Mary Miles Minter.  Part of Raoul Walsh’s The Big Trail (1931) had been shot there, with wagons being lowered down cliffs into the valley.  Beery was so taken with the place he built a cabin on the shores of Jackson Lake and even participated in a protest with local ranchers in 1943.