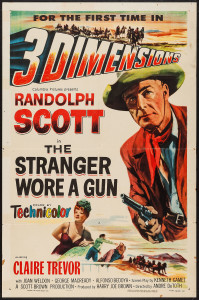 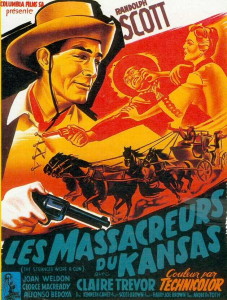 One-eyed Hungarian director André de Toth had gotten off to a good start in westerns, with the sultry Ramrod (1947), followed by writing on The Gunfighter (1950) directed by Henry King.  He then followed with six westerns with Randolph Scott, of which this is one.  With a cast also including Claire Trevor and early bad guy roles for Lee Marvin and Ernest Borgnine, this could have been great, and it isn’t.  The story and writing (by Kenneth Gamet) just aren’t strong enough.  But if you like De Toth’s work, Randolph Scott, Claire Trevor and Lee Marvin, you nevertheless have to see it.

The title could be attached to almost any western, a genre where all the strangers wear guns.  During the Civil War, Lt. Jeff Travis (Randolph Scott) spies for Quantrill in Lawrence, Kansas, in preparation for the notorious guerilla raid on that abolitionist-sympathizing town.  Disgusted by the indiscriminate slaughter and Quantrill’s callous indifference to the infliction of death and devastation, he drops out, but his reputation follows him.  After the war, Travis is a gambler on a riverboat when he is recognized and attacked.  A mysterious figure saves him with a thrown knife to the back of an attacker.  Sympathetic fellow gambler Josie Sullivan (Claire Trevor) sends him to Prescott, Arizona Territory, to Jules Mourret. 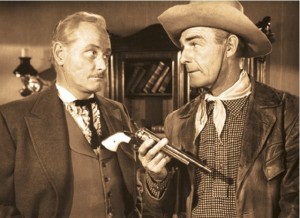 Prescott is a lawless mining town, where two rival gangs raid the Conroy stage line and commit other depredations.  As Travis arrives (he’s the titular stranger with a gun), the territorial capital is being moved to Phoenix in reaction to Prescott’s lawlessness.  Mourret (George Macready), another former Quantrill man, turns out to be the leader of one of the two gangs and Travis’s knife-wielding rescuer from the riverboat.  Using the name of “Matt Stone,” Travis tells the Conroys that he’s a Pinkerton agent sent to help them.  The attractive Shelby Conroy (Joan Weldon), daughter of the line’s owner, is obviously drawn to him.  And Travis finds himself once again working for the bad guys and deceiving decent people, just as he did for Quantrill. 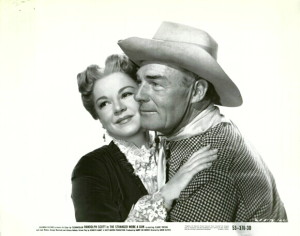 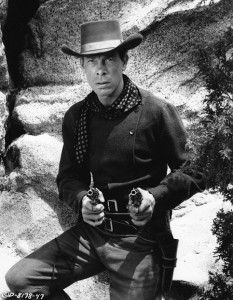 Josie Sullivan shows up in Prescott to ply her trade as a gambler and to see how Travis is doing.  She tells him he’s wanted in Louisiana for the riverboat killing.  Conroy is fairly successful at hiding the gold on his stages, but when Mourret’s men Dan Kurth and Bull Slager (played by Lee Marvin and Ernest Borgnine) kill a friend while trying to beat out of him information he doesn’t have, Travis’s allegiances shift again.  He tries to set the two gangs against each other, with some success.  Nevertheless, he has to shoot it out with Kurth; Lee Marvin traditionally doesn’t have much luck against Randolph Scott (see Hangman’s Knot and especially Seven Men From Now).  Mourret and Travis ultimately fight it out in a burning building (see Scott in burning buildings in Hangman’s Knot, Riding Shotgun, and Ten Wanted Men), and Travis wins.  Shelby Conroy is crushed at Travis’ deceit and betrayal, but it turns out Travis really wants Josie anyway.  And she lied about him being wanted in Louisiana.

There’s a lot of plot stuffed into only 83 minutes; it doesn’t develop organically, it feels at the end as if there are a number of loose ends, and there are a number of elements we’ve seen before. Neither the Travis nor the Sullivan characters is entirely admirable, with their shifty allegiances and casual deceit of friends and innocent people.  But it is a good cast and the film is ultimately worth watching.  Produced by Harry Joe Brown, with Randolph Scott as associate producer, in color; shot at Lone Pine.  It was also shot in 3-D, like Hondo and Gun Fury, during the brief period in the early 1950s when studios were experimenting with that new presentation.  That accounts for the occasional lunge toward the camera with a burning torch, gun or spear. 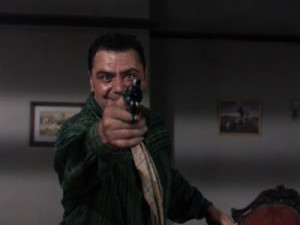 Claire Trevor (Stagecoach, Allegheny Uprising, The Desperadoes, Best of the Badmen) was coming to the end of an excellent Hollywood career.  Her performances in Stagecoach, Dead End, and Key Largo (an Oscar winner for her) are great ones.  Here she seems to be better than her material.  Joan Weldon never really balances her as a competing romantic interest in this film, although Trevor plays the sort of character who normally shouldn’t win in the end.  Weldon will show up to better effect in 1957’s Gunsight Ridge, with Joel McCrea.  Lee Marvin was starting his memorable career as a heavy (Hangman’s Knot, Seven Men From Now, The Man Who Shot Liberty Valance), and Ernest Borgnine regularly showed up as a bad guy as well (Johnny Guitar, The Bounty Hunter, Vera Cruz).  Two years later they both turn up as bad guys working for Robert Ryan in John Sturges’ excellent Bad Day at Black Rock.   Alfonso Bedoya’s performance as the Mexican head of the gang rivaling Mourret’s bad guys seems fairly broad and stereotypical now.  If you’re a Scott fan, you’ll be delighted by the appearance of his beautiful dark palomino Stardust and his worn leather jacket, both of which show up here.  Although the directing in this film is nothing dazzling, De Toth went on from this to make the quintessential early 3-D horror movie:  House of Wax.