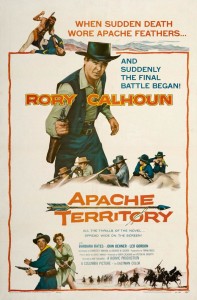 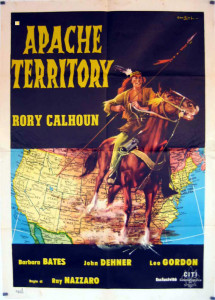 Based on an early novel by Louis L’Amour (Last Stand at Papago Wells, which would have been a better and less generic title), this is first an Old Scout Takes Charge story.  The Old Scout here is Logan Cates (Rory Calhoun), and he is one of those omni-competent frontiersmen of whom L’Amour was so fond, like Hondo Lane (John Wayne, also in a story by L’Amour), Ward Kinsman (Robert Taylor in Ambush), Shalako (Sean Connery in Shalako) or Archie McIntosh (Burt Lancaster in Ulzana’s Raid).  It is also a Lost Patrol story, like Fort Massacre, from the heyday of cavalry westerns.  It has echoes of Strangers on a Stagecoach stories, except that this time it’s strangers surrounded by Apaches.  If only it had an easterner coming west and learning new ways and a Mysterious Stranger, it might have most of the traditional elements of western stories packed into one relatively short B western.

We first find Cates in the Arizona desert, aided by a little voice-over narration, as he tries to get to Yuma while avoiding hostile Apaches.  He’s successful enough until he spies several white horsemen who don’t see Apaches about to attack them; he fires a couple of warning shots, and they take off, followed by the Apaches.  He cautiously approaches the next water, only to find the whites’ bodies, and a live Apache.  He kills the Apache and finds one young white survivor with a wound:  19-year-old Lonnie Foreman (Thomas Pittman), who joins him.  A bit later Cates comes upon a wagon the Apaches have already left; a quivering young woman, Junie Hatchett (Carolyn Craig), huddles under the sagebrush with the rest of her family slaughtered nearby. 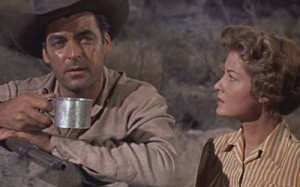 As the three head for Apache Wells, they encounter two more riders:  former Confederate cavalry officer Grant Kimbrough (John Dehner) and his fiancée Jennifer Fair (Barbara Bates), also heading for Yuma.  As they all stop for water at Apache Wells, they are surrounded by Apaches under their leader Churupati and are joined in due course by six surviving cavalrymen from a patrol from Yuma, as well as Lugo (Frank DeKova), a Pima scout and prospector.  The cavalrymen have their own problems, in addition to having lost fifteen men already.  Their sergeant, Sgt. Sheehan (Francis De Sales), is a former desk clerk from St. Louis, and Zimmerman (Leo Gordon), whom he has demoted, is in a state of near constant rebellion.

[Spoilers follow.]  The sergeant defers to Cates in matters of strategy and planning.  Kimbrough initially does the same, but doesn’t trust his fiancée with Cates around and really wants to leave quickly.  Zimmerman wants to take over and is a constant source of tension.  Kimbrough and Zimmerman don’t trust Lugo, but Cates is inclined to, since Apaches hate Pimas.  Cates has a history with Jennifer that puts him at odds with Kimbrough.  He insists that they wait out the attack, since they have water and the Apaches don’t.  He and Lugo think a storm is imminent, and they plan to get out under cover of the weather.  The cavalrymen get picked off one by one, starting with the sergeant and another.  Zimmerman is killed trying to break out, and another (Myron Healey) is driven crazy thinking of his family in Illinois.  Finally, as the storm comes up, Cates, Lonnie, Kimbrough and Conley (the last cavalryman) fashion bombs out of gunpowder and canteens and use the storm as cover to deliver them—except for Kimbrough, who tosses his aside and ducks back to cover. 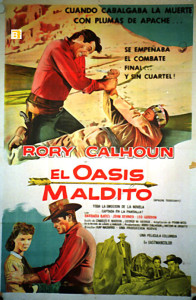 By the end, the survivors ride out.  Kimbrough is dead after a fight with Lugo, Cates and Jennifer are back together, and it looks like Lonnie and Junie will ride on to California and make a life together with a little gold given to them by Lugo.  The five are the only survivors.  We never see Churupati.

Rory Calhoun could be a decent actor with good material and direction (see him in Dawn at Socorro, for example).  Here he mostly looks pained while others quarrel with him, as he tries to save people he’s not really responsible for.  He tended to be the protagonist in B westerns but a bad guy in A westerns (see, for example, The Spoilers and River of No Return).  Cates’ backstory of his relationship with Jennifer is not terribly convincing.  One suspects the direction by journeyman Ray Nazarro wasn’t much help.  Nazarro directed a lot of B westerns, and this was his last movie.  John Dehner (The Fastest Gun Alive, Trooper Hook, Man of the West, The Left-Handed Gun) and Leo Gordon (Hondo, Gun Fury, Ten Wanted Men, 7th Cavalry, McLintock!) were both excellent character actors, and they do well enough here. Gordon tends to be on one note of hostility here, and he can do much more than that if allowed.  Barbara Bates is fine; she’s required to move from hositility to Cates to despising Kimbrough to rapprochement with Cates, and it works.  DeKova works well enough as the Pima Lugo.   Pittman and Craig would have done better with better writing for their parts and more nuanced direction.   Both Tom Pittman and Carolyn Craig, who played the young couple, died young and violently—Pittman soon after the release of this movie in a car crash and Craig in 1970 by gunshot (suicide).  Barbara Bates was also a suicide in 1969.

In all, this is a watchable B western, especially for fans of Rory Calhoun.  It’s not perfect, and it’s marred by pedestrian direction.  Among all westerns, it might win the award for Best Performance by a Gila Monster.  Shot in color by Irving Lippman, at 77 minutes.  Not to be confused with Apache Country, with Gene Autry (1952).  Or with the classic Fort Apache, for that matter.