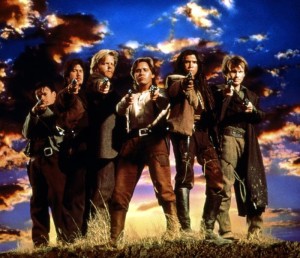 Poster art for the Gang 2.0, with the addition this time of Tom O’Folliard (Balthazar Getty) and Hendry French (Alan Ruck) on the left, and Arkansas Dave Rudabaugh (Christian Slater) on the right.

Young Guns was a surprise hit in 1988, striking a chord with the youthful end of the movie-going public. It gave rise to a new idea at movie studios:  Perhaps there was a market for youth-oriented westerns, a genre whose principal audience had been considered to be among the aging population that still remembered, and harbored a fondness for, John Wayne.  The new idea resulted in such westerns with young actors as American Outlaws (2001) and Texas Rangers (2001), neither of which did much at the box office because they were not good movies.  And, of course, it led inevitably to a sequel to Young Guns.  As with the first movie, the sequel consists of several facts mixed with a lot of fiction.

When last seen in the first movie, Billy (Emilio Estevez) and several of his compatriots were escaping from the burning McSween house in Lincoln, New Mexico, after an extended battle in 1877.  Alexander McSween himself and Charlie Bowdre (Casey Siemaszko) were killed, but Billy got out; Doc Scurlock (Kiefer Sutherland) returned to the East and José Chavez y Chavez (Lou Diamond Phillips) headed west to California.  As Young Guns II opens a year later in 1878, Billy is now riding with a couple of new comrades:  Arkansas Dave Rudabaugh (Christian Slater), who envies Billy his notoriety, and Pat Garrett (played briefly by Patrick Wayne in the first movie, here by William Peterson with luxurious sidewhiskers in a more significant role). 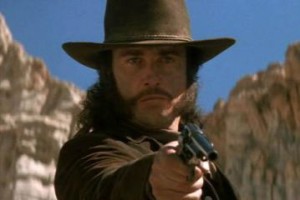 Pat Garrett (William Petersen) during his days of riding with Billy.

The initial scenes show Doc Scurlock, now teaching children in a school in New York, being abducted and thrown into a pit-jail in Lincoln, where he is reunited with Chavez.  Billy meets with Gov. Lew Wallace (Scott Wilson), and they negotiate a deal:  Billy testifies against the Murphy-Dolan faction in court after a brief token imprisonment, and in return he is to receive a full pardon.  But the Lincoln County prosecutor is a member of the Murphy-Dolan ring, and he intends to hang Billy.  Billy manages to escape, along with Scurlock and Chavez.  Pat Garrett leaves the gang for a more respectable life, but they are joined by Hendry William French (Alan Ruck), a farmer who has lost his family and farm, and Tom O’Folliard (Balthazar Getty), a 14-year-old who looks younger.

Billy tells the other members of the gang they’re heading south to Mexico along a trail he calls the Mexican Blackbird.  They stop by the ranch of John Chisum, an ally of Billy’s murdered former boss John Tunstall.  Chisum (James Coburn, who had played Pat Garrett almost twenty years earlier in Sam Peckinpah’s Pat Garrett and Billy the Kid [1973]) resists financing Billy’s expedition south, and they shoot two of his men.  When they leave, Chisum decides to “set a thief to catch a thief,” and he recruits Garrett as the new sheriff of Lincoln County to hunt Billy down.

Billy (Emilio Estevez) is captured more than once, but never intimidated.

Garrett’s posse includes a newspaperman and John W. Poe (Viggo Mortensen in a small role), a representative of the cattlemen’s association who is there to see that Garrett takes his responsibilities seriously.  At White Oaks, Billy and his men are enjoying themselves at Jane Greathouse’s sporting place when accosted by a local mob wearing hoods.  Billy negotiates an exchange of Chavez for the mob to hang, but sends Deputy Carlyle out in Chavez’ clothing and hat, and the mob shoots him to pieces.  Garret burns down Jane’s establishment in retaliation (despite their past history), and she leaves town in Lady Godiva fashion for unknown reasons.

Finally the gang is cornered in a remote cabin at Stinking Springs.  O’Folliard and Scurlock are killed; Chavez is badly wounded, and Hendry and Rudabaugh barely escape.  Billy surrenders and is jailed in Lincoln.  Jane Greathouse is not allowed to talk with him privately but plants a gun in the outhouse, and Billy pulls off his famous jailbreak, killing Bob Ollinger with his own shotgun, as well as Deputy James Bell.  Billy heads for Fort Sumner, where he sees a dying Chavez and encounters Pat Garret waiting for him in the dark.  We see Billy’s funeral in Fort Sumner.  But we also have a framing story from 1950, claiming that Billy’s friend Pat Garret did not kill him, and that Billy lived until 1950 as Brushy Bill Roberts.

The director here is not the same as the first movie; this may be the best-known movie directed by New Zealander Geoff Murphy.  But the writer, John Fusco, is the same, and the feel of the movie is quite similar, although the story here is more episodic.  There are bits of anachronistic dialogue, as in the first movie.  A feeling of doom pervades this film, since we all know that Billy didn’t live long.  Billy (Emilio Estevez) is his usual immature self, slick with guns, heedless and utterly self-confident.  Jenny Wright is memorable in a brief role as sensual madam Jane Greathouse.  The Tom O’Folliard and Hendry William French characters feel unnecessary, although Alan Ruck is good as Hendry.  This may have been one of Christian Slater’s best roles; Slater has a limited range as an actor, and Arkansas Dave Rudabaugh seems perfectly suited to him.  William Peterson is one of the better versions of Pat Garrett on film, although he is still somewhat enigmatic.  If you liked Young Guns, you’ll want to see Young Guns II.  Together, they constitute their generation’s glossy cinematic version of the Billy the Kid story.  In color, at 104 minutes.

What about historical inaccuracies?  There was no Jane Greathouse; Billy and his compatriots were besieged at the house of James Greathouse in White Oaks.  Scurlock was not killed at Stinking Springs or elsewhere; he returned east, but only as far as Texas, where he lived out his life until 1929 as a respected citizen.  His death in the movie was based on the actual death of Charlie Bowdre, apparently written that way in the movie to accommodate Kiefer Sutherland’s schedule on other projects.  Chavez became a gunfighter and policeman in New Mexico, and apparently died of natural causes in 1924.  Tom O’Folliard was Billy’s best friend in the gang, and he was not 14 but was about 22 (near Billy’s own age) when he was killed by Garrett’s posse.  Pat Garrett and Billy were not close friends and did not ride together; they were at best casual acquaintances.  Garrett did hire a writer to get out his side of the story, since Billy was popular in some quarters in New Mexico.  Dave Rudabaugh was sometimes known as Dirty Dave, a particularly unpleasant New Mexico outlaw with an aversion to water like the Dirty Steve character played by Dermot Mulroney in the first movie.  Rudabaugh never used the name “Arkansas Dave.”  He was captured at Stinking Springs, not fleeing south to Mexico.  After escaping from jail in New Mexico, he joined the Clanton gang around Tombstone, Arizona Territory, fighting the Earps.  The events of the last three years or so of Billy’s life are compressed to make them seem more like two or three months.  That’s for starters. 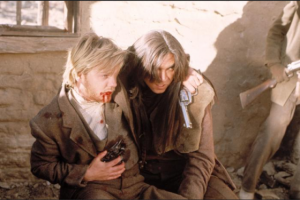 With famous outlaws (Jesse James, Butch Cassidy) there appears to be an irresistible temptation to come up with some reason they did not die as history records but lived on to a healthy old age under another name.  The same impulse is there with Billy the Kid.  But the best information indicates that he was really killed by Pat Garrett at Fort Sumner in July 1881, about the age of 21.

Dave Rudabaugh shows up in The Gunfight at Dodge City (1959), but his role there is completely fictional.  Wyatt Earp first meets Doc Holliday in Fort Griffin, Texas, when hunting Dave Rudabaugh in Wyatt Earp (1994).

Some music for the film is provided by rock musician Jon Bon Jovi, who also has a cameo as one of the prisoners in the jail-pit in Lincoln. He gets killed early in the movie.

Trivia and obvious question:  At one point in the movie, Doc Scurlock quotes the Edgar Allan Poe poem “El Dorado.”  For no extra points at all, name the other western in which the same poem is quoted.  For the answer, click here.  Kick yourself if you didn’t get this one.