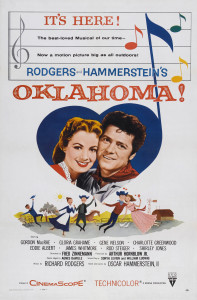 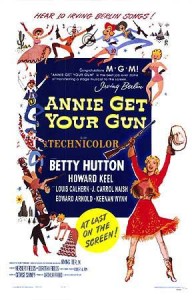 Or are they western musicals?  The two movie genres of musicals and westerns make for an uneasy mix (see, for example, the ballet sequence in Oklahoma!), but it has been done several times.  It appears to have been most successful in the early 1950s, when Howard Keel was the king of the mixture, partnering with Betty Hutton (Annie Get Your Gun), Doris Day (Calamity Jane) and Jane Powell (Seven Brides for Seven Brothers).  Some of the biggest names in the American musical theater, such as Rodgers and Hammerstein and Lerner and Leowe, tried their hand at these.  Finally, as big musicals were fading from cinematic favor in the late 1960s, one of the last of them was Paint Your Wagon.  For hard-core fans of westerns, these are not usually the sort of thing they like, even if they do star Clint Eastwood and Lee Marvin.

Some westerns have a significant musical number, usually provided by a dance hall performer, like “See What the Boys in the Back Room Will Have” sung by Marlene Dietrich in Destry Rides Again (1939) or “Some Sunday Morning” sung by Alexis Smith in San Antonio (1945).  But they don’t have enough of them to qualify as musicals.  Howard Hawks liked to throw in an occasional musical number as an indication of male bonding, as he did with the duet featuring Dean Martin and Ricky Nelson in Rio Bravo.  But musicals weren’t really his genre, although he had an unusually wide range as a director. 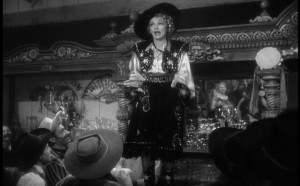 Marlene Dietrich as Frenchy in Destry Rides Again: “See What the Boys in the Back Room Will Have.” 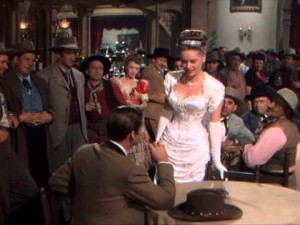 Girl of the Golden West (1938).  Nelson Eddy is an improbable Mexican bandit and Jeannette Macdonald his romantic interest in old California.

Go West, Young Lady (1941).  This comedy/musical follows the new sheriff (Glenn Ford) in Headstone, as he romances the niece (Penny Singleton) of the owner of the Crystal Palace saloon.  Ann Miller sings and dances as the principal entertainer at the saloon.  And Bob Wills and his Texas Playboys show up as well.  Some of the songs are by Sammy Cahn and Saul Chaplin.

Belle of the Yukon (1944).  Set in the gold-rush Yukon in northwestern Canada at the turn of the last century, most of the music is provided by a young and dark-haired Dinah Shore as a dance hall entertainer.  The main action is provided by stars Randolph Scott and Gypsy Rose Lee.

The Harvey Girls (1946).  Not much of a western, but it is set in the southwest as the railroads extended into that part of the country.  And what list of musicals would be complete without Judy Garland somewhere on it?

Two Guys from Texas (1948).  Two vaudevillians (Dennis Morgan and Jack Carson) on the run from crooks try to pass themselves off as cowboys.  With Dorothy Malone.

Annie Get Your Gun (1950). Judy Garland was originally slated to star in this, but her star was just beginning to fade at MGM and the role of Annie Oakley went to Betty Hutton in the film.  She and Howard Keel as Frank Butler cavort their way through Buffalo Bill’s Wild West show. 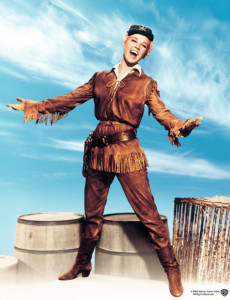 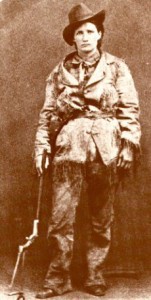 Calamity Jane:  Which is the real one?

Calamity Jane (1953).  In appearance, it would be hard to get farther from the actual Martha Jane Canary of Deadwood, Dakota Territory, than Doris Day.  And Howard Keel doesn’t look or act much like Wild Bill Hickok, either, but in 1953 you couldn’t make a musical movie based in the west without him.

Seven Brides for Seven Brothers (1954).  Set in Oregon in 1850, this is one of the biggest hits of Howard Keel’s career, as he plays Adam, the oldest of the seven brothers, who marries Jane Powell and inspires his six brothers to abduct their own intended brides.

Oklahoma! (1955).  One of the first of the string of successful Rodgers and Hammerstein musicals on Broadway, this took its time making it to film with Gordon McCrae and Shirley Jones.

Paint Your Wagon (1969).  Set in gold rush northern California of 1850, Lee Marvin and Clint Eastwood demonstrate that while they rank among the best actors in westerns, they’re not entirely comfortable in a musical, especially when they have to sing. 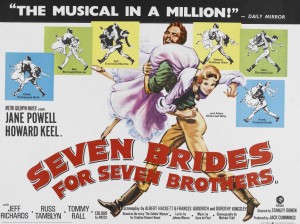