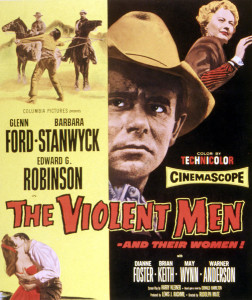 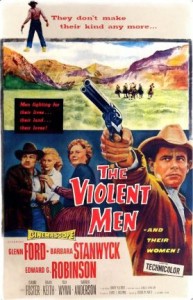 This belongs to the “cattle queen western” subgenre, along with Johnny Guitar, Rancho Notorious, Forty Guns and various others from the 1950s, in which a dominant character is played by an established and prominent Hollywood actress of a certain age.  The violent men of the title are played by Glenn Ford, Edward G. Robinson and Brian Keith, but it turns out to be Barbara Stanwyck who dominates the course of the plot.

Capt. John Parrish (Glenn Ford) is a wounded veteran of the Union cavalry in the recent Civil War. He had come west three years previously to recover from a wound that went through his lung.  He receives a clean bill of health at the start of the movie and intends to marry Carolyn Vail (May Wynn), sell his ranch and movie back east.  The only potential buyer is Lew Wilkison (Edward G. Robinson), the crippled owner of the huge Anchor Ranch, by far the largest in the valley.

Lew Wilkison:  “Here at Anchor we don’t pay much attention to that hogwash about the meek inheriting the earth.”

Wilkison has long been trying to expand his Anchor Ranch to encompass the entire valley.  Twelve years previously during a burst of violence in the valley he was crippled, and he now walks only with crutches and even then with difficulty.  Parrish notices the Anchor men, especially gunman Wade Matlock (Richard Jaeckel), renewing their efforts to chase off other landowners; Matlock shoots the local sheriff in the back, and he is replaced by the unctuous Magruder (James Westerfield), who is more completely in Anchor’s pocket.  Lew Wilkison and his brother Cole (Brian Keith) offer Parrish only $15,000 for his ranch.  Wilkison’s alienated daughter Judith (Dianne Foster) is outraged at her father’s behavior, but his wife Martha (Barbara Stanwyck) appears to be pulling the strings and to have developed a relationship with Cole.

John Parrish:  “Don’t force me to fight, because you won’t like my way of fighting.”

Matlock and several Anchor riders try to push Parrish by killing one of his hands, but Parrish, who has been a determined pacifist to this point, takes the hand’s gun, confronts Matlock, and kills him.  No one attends Wade Matlock’s funeral, and one of Parrish’s riders wonders if there will be reprisals from Matlock’s friends.  John Parrish: “Matlock wasn’t the kind to have any friends after he was dead.” 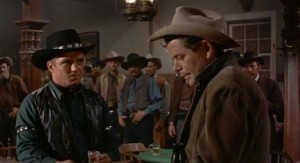 [Spoilers follow.]  Parrish brushes off his military skills from the war and prepares for battle.  Carolyn is appalled and ends their engagement when Parrish refuses to go east immediately.  Using his own ranch as bait, he sets up an ambush in a canyon when Anchor riders burn it down and take the shortest way home.  In retaliation,  Parrish and his men stampede Anchor’s horses and cattle, and use the distraction to burn most of the Anchor buildings.  Martha escapes the burning mansion, tossing away Lew’s crutches and leaving him to die in the flames.  Cole and Magruder lead a small army of riders attacking all the smaller ranchers and farmers, until Parrish finds that Judith has rescued her father.  In a confrontation at the Anchor ranch, Lew orders the riders away.  Parrish and Cole have a classic showdown, and Martha is killed by Cole’s Mexican paramour.  At the end, Lew wants to hire Parrish to run the Anchor ranch, and Judith and Parrish appear to be striking up a relationship. 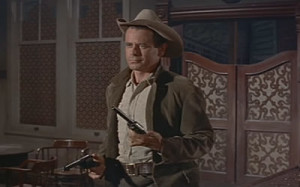 This is a good melodramatic range war western for its time, but pedestrian direction takes it out of the really excellent category.  Neither the Stanwyck nor the Dianne Foster character has much nuance.  Glenn Ford is good in his tenth western; he’s wearing the same hat he’ll be wearing for the next 15 years, and it’s not yet as disgusting and shapeless as it would become.  Edward G. Robinson was an excellent actor, and his presence, along with Stanwyck’s, reminds us of Double Indemnity (1944), giving this more of a western-noir flavor.  Robinson didn’t make many westerns, in part because, like James Cagney, he seems to have a modern, urban presence.  But he works well here, hard but able to shift tone convincingly.  Brian Keith, in dark hair and a thin mustache, makes a fine bad guy early in his career.  And Richard Jaeckel is good as a gunman without conscience.  An uncredited Richard Farnsworth is one of the Anchor riders.

During its second half, the action is interesting enough but not well developed, as the two sides progress through strike and counter-strike.  In particular, the shootout between Ford and Keith at the end is not well-edited (compare it with Budd Boetticher’s handling of Randolph Scott and Lee Marvin in Seven Men From Now [1956] in a moment of similar dramatic intensity, for example), nor is Stanwyck’s death.  The end seems very quick, not fleshed-out, and a bit out of character for Parrish. 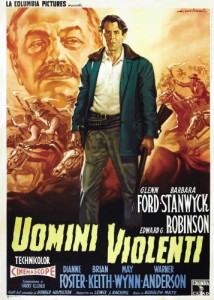 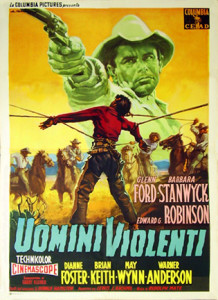 For another crippled cattle baron in a range melodrama, see Lionel Barrymore in Duel in the Sun (1947).  For Barbara Stanwyck as another cattle queen, see her in Forty Guns (1957, with Barry Sullivan); she doesn’t win there, either.  She’s better in Trooper Hook (1957, with Joel McCrea) and The Moonlighter (1953, with Fred MacMurray).  For Glenn Ford in another range melodrama, see him in Jubal (1956), which is better than this.  For James Westerfield displaying the same unctuousness in a range war, see Man With a Gun (1955, with Robert Mitchum).  For another Union Civil War veteran trying unsuccessfully to revert to pre-war pacifism because of the horrors of the war, see Rock Hudson in Gun Fury (1953).

There is some well-written dialogue here, by Harry Kleiner.  The music is by Max Steiner.  Shot in Lone Pine and the Alabama Hills, in California, and in Old Tucson, Arizona.  In color, at 96 minutes.