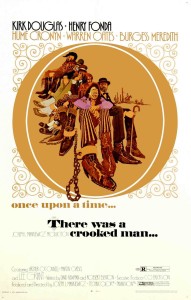 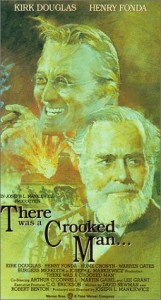 A cynical revisionist western prison movie, featuring Kirk Douglas in red hair as Paris Pitman, Jr., a convict wanting to get out to retrieve his stash of loot—half a million dollars he put in a rattlesnake pit in the barren mountains.  Although the title refers to one crooked man, its point of view is that everybody is at least a little crooked.  Pitman spends the movie conniving with everybody in sight (including the warden) and alternatively trying to orchestrate a break-out with a number of his imprisoned compatriots.

Eventually a new warden comes in, former sheriff Woodward Lopeman, played by Henry Fonda as the embodiment of Christian rectitude with a commitment to rehabilitation and fair treatment of the prisoners.  Pitman continues to foster havoc and confusion at the prison until, finally, he is successful at breaking out, tracked by Warden Lopeman. 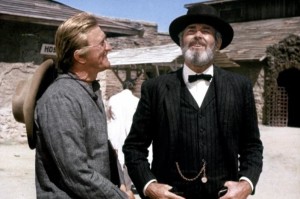 Nobody is very admirable here, although the Fonda character tries until the end, when he succumbs to the lure of the loot.  There are a couple of shots of Douglas’ butt (in great shape at age 53), with other gratuitous nudity.  Although it seems to have been trying for humor, the movie has a pretty thoroughly amoral feel to it.  The comedy here is black, sometimes overly obvious, and it now seems dated.  Hume Cronyn and John Randolph play an obviously gay pair of con men, probably an innovation in movies at the time.  It’s from about the same time as Peckinpah’s The Ballad of Cable Hogue, and there are some similarities in tone.  Not as good as it should have been, with inconsistencies of tone.  Seen in a pretty dingy, beat-up print, but if you watch it on TCM, for example, the print they use is bright and clear.  Rated R.

Douglas himself, in his memoir The Ragman’s Son, noted that “The picture was very cynical and did not do well–everybody was crooked, nobody to root for.”  Douglas seems to place at least some of the blame on director Joseph Mankiewicz, who had directed All About Eve and Cleopatra, among others.  “He was much more at home with a scene in a library.”  Douglas did have high praise for the script, though, which would seem to be at least as much at fault.  This was one of the last films made by Mankiewicz, and his only western.  The screenplay is by David Newman and Robert Benton, not long after their first effort, Bonnie and Clyde.  For another cynical revisionist western from the early 1970s with Kirk Douglas, see Posse. 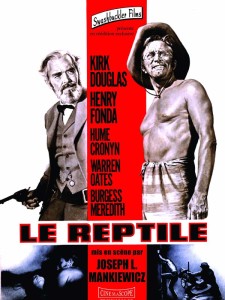 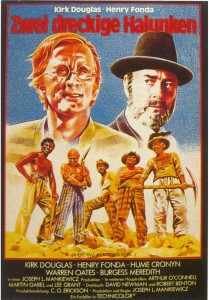