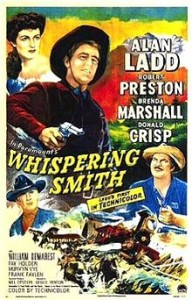 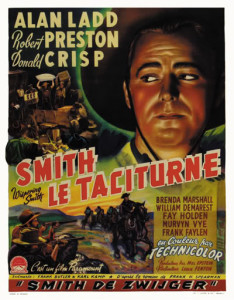 A frequently-told western railroading story with Alan Ladd in the title role of the railroad detective.  It was at least the sixth filmed story featuring the character Whispering Smith.  It’s melodramatic, with Ladd looking not entirely comfortable in his first western role and his first color film as a major star.  He was more convincing by the time he did Shane four years later.

Whispering Luke Smith is a railroad troubleshooter, and his old friend Murray Sinclair (Robert Preston) has started a ranch of his own and married Marian (Brenda Marshall), whom they both loved.  This is one of Preston’s patented old-friend-goes-bad roles, in which he seemed to specialize in the 1940s (see Union Pacific, North West Mounted Police and Blood on the Moon, for example).  Donald Crisp, instead of playing the personification of occasionally misguided rectitude as he usually did in westerns (The Man From Laramie, Saddle the Wind, Ramrod), is here not terribly persuasive as Barney Rebstock, a bandit chief and rustler. 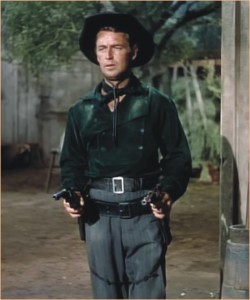 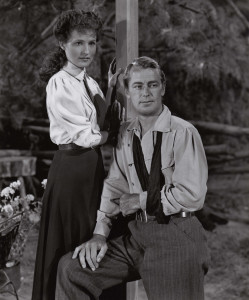 Alan Ladd as Whispering Smith; and production still of Brenda Marshall and Alan Ladd.  Having Ladd sit down disguises his short stature, always a visual problem when he wasn’t sitting on a horse.

In addition to running his ranch, Murray still works for the railroad, leading crews that clean up when a train is wrecked.  But he is edging more into wrecking trains for his own profit, after feeling disregarded by the bureaucracy of the company.  His relationship with Marian is becoming more strained as well, and he becomes more obsessed with the idea she might leave him for Smith.  This ends as it usually did for Preston in such roles.  Smith spends the movie balancing the duties of his job against his friendship with Murray, as well as his continuing regard and affection for Marian, while Murray gets deeper into anti-railroad crime.  Smith grapples with multiple bad guys, including the train-robbing Barton boys, Rebstock and his gunslinger Whitey, and it’s not clear until the end how his long-time friendship with Murray will turn out.

Brenda Marshall, then married to William Holden, made only one more film before retiring from the movie business.  Ladd and Preston were good friends, and this was the last of five movies in which they appeared together (This Gun For Hire, Variety Girl, Wild Harvest, etc.).  Ladd later became more comfortable and persuasive in westerns.  Not only did he go on to make the iconic Shane, for example, but he made a string of westerns in the 1950s, such as Branded, Drum Beat, Saskatchewan, Red Mountain and The Badlanders.  In color, at 88 minutes. 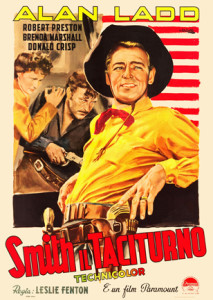 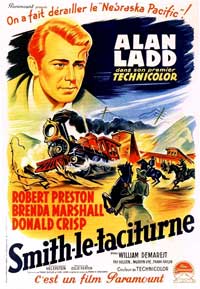 Frank H. Spearman wrote the 1906 novel first using this character; at least one edition was illustrated by N.C. Wyeth.  The first Whispering Smith film was made in 1916, with the character said to be based at least in part on Joe LeFors, an actual western lawman (and sometime Union Pacific detective) based in Denver and Cheyenne who had chased Butch Cassidy and caught Tom Horn at the turn of the century.  Whispering Smith was played by silent star George O’Brien when he drifted into the lower-prestige genre of westerns during the 1930s.  After this 1948 film, the character was used once more in Whispering Smith Hits London (1952), after which he was retired from the movies, apparently for good.  He showed up on television for twenty episodes beginning in 1961, played by Audie Murphy. 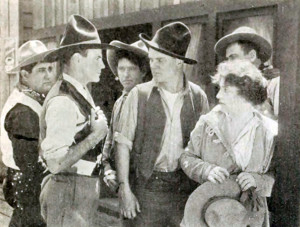 Whispering Smith (J.P. McGowan) in a scene from the 1916 movie of that name.