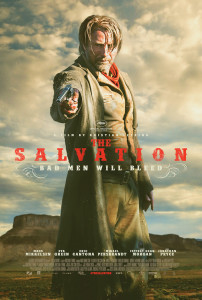 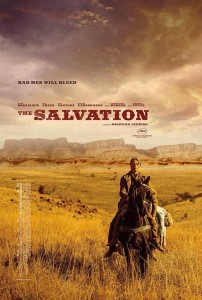 This is a bleak Danish Euro-western with a vengeance-driven plot.  Jon (Mads Mikkelsen) and his brother Peter (Mikael Persbrandt) are Danish veterans of an unsuccessful 1864 war with Birmarck’s Germany, as Germany grabbed the traditionally Danish province of Schleswig-Holstein.  In the wake of the war they came to settle on the American frontier, and after seven years Jon’s wife Marie (Nanna Øland Fabricius) and 10-year-old son Kresten are finally able to join them.  As Jon and his family take a stagecoach from the town of Black Creek, they are joined at the last minute by two men who have been drinking.  In the course of the journey, the men show interest in Jon’s wife and knock him out of the coach.  He follows and finds first his dead son and then his wife’s body.  Implacable, he kills the two men responsible.

It develops that the more offensive of the two was the brother of Henry Delarue (Jeffrey Dean Morgan), a Union army veteran, former Indian fighter and now local outlaw chieftain.  Delarue has terrorized the town, led by mayor-undertaker Keane (English actor Jonathan Pryce) and sheriff-priest Mallick (Scottish actor Douglas Henshall), but now he ups the ante.  He demands that in two hours the town surrender the killer (obviously impossible), or two people for him to kill.  When he doesn’t like the two chosen, he gratuitously shoots a third. 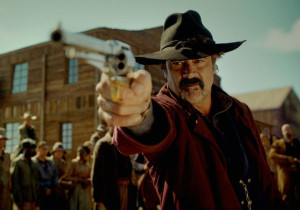 [Spoilers follow.  If you plan to see this in the near future, you may wish not to read this and the following paragraph.]  Delarue is not operating alone.  He is chasing people off so that a railroad can take over the town and all the country around because it has oil—hence the name Black Creek.  Keane buys up farms for a pittance and delivers the deeds to Delarue.  When Jon and Peter come back to town to sell their farm, Jon is captured and Peter thrown in jail.  Peter escapes and releases the beaten Jon.  As they flee, they split up, and Peter is killed. Jon finds a rifle and heads back to town. 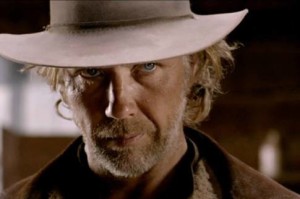 Brother Peter (Mikael Persbrandt), not a man to underestimate.

Delarue has raped his brother’s widow Madelaine (Eva Greene), who has a scar across her mouth and is mute from having her tongue cut out by Indians.  She tries to leave but is restrained by Delarue’s men, and he gives her to them.  Having made it back to Black Creek, Jon kills Keane and puts him in one of his own coffins.  Jon starts picking off Delarue’s men one by one, and a larger-scale battle breaks out.  Jon is hit twice, and it looks like Delarue, the last survivor of his band, will win.  But voiceless Madelaine kills him with a rifle blast to the back.  As Sheriff Mallick and his posse come back to town, Jon orders them to leave, and then he and Madelaine leave together. 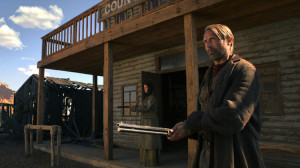 Former soldier Jon (Mads Mikkelsen) is not a man to run.

Mads Mikkelsen, with the sharp planes of his face, plays implacable very well, but he seems mostly to have only one expression.  Eva Green, with no dialogue but only her ferocious eyes for communication, is very effective.  Jeffrey Dean Morgan makes an adequate villain, but one that is written without much subtlety; the story would work better if there were more dimension to him.  Swedish actor Mikael Persbrandt as Jon’s brother Peter may be the best character in the movie, but he is killed off too early.  French-English former soccer star Eric Cantona plays one of the most prominent of Delarue’s henchmen (the Corsican).  This is an unusual take on the immigrant experience in the American west.

The combining of town positions like mayor and sheriff with undertaker and priest make clear the town’s connivance with Delarue and its responsibility for what comes of that.  The sheriff-priest has chosen to protect his flock by acceding to the presence and dominance of evil.  This kind of collective guilt is reminiscent of Clint Eastwood’s town of Lago in High Plains Drifter (1973), although The Salvation has none of its surrealism.  The necessity and ultimate futility of violence remind us more of Eastwood’s masterpiece Unforgiven (1992).  There is little dialogue and less exposition.  Although the movie is not long at 92 minutes, it feels quite leisurely, even slow, in its pacing.  As a western, it works; although it is violent, it nevertheless does not exactly revel in the violence.  This may be the best Danish western you’ll ever see.

Madelaine (Eva Green), recent widow who doesn’t say much, is not a woman to take lightly.

The film was co-written and directed by Kristian Levring.  The excellent cinematography, much of it in tones of brown, is by Jens Schlosser.  It was shot in South Africa, with the occasional butte or other geographical feature to remind us, perhaps by means of CGI, of the American west.  The music, mostly quiet guitar, is played by Javier Mas.  Rated R for violence.  Seen at several film festivals (including Cannes) in 2014, it was released in the U.S. in art houses and video-on-demand in late February 2015 and is scheduled for release in the UK in April 2015.