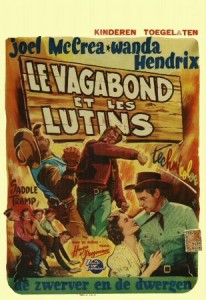 Chuck Conner (Joel McCrea) is the titular saddle tramp, an experienced cowhand heading through Nevada on his way to California.  He stops to see Slim Stevens, an old friend with four small boys. Their mother has been dead a year, and while Chuck is there Slim falls off a horse and breaks his neck.

Chuck heads toward California with the four boys in tow.  He finds a job at the Higgins ranch, but owner Jess Higgins (John McIntire) doesn’t like kids [a plot contrivance that isn’t terribly persuasive, especially since he’s married to Jeannette Nolan, one of the quintessential mother figures in westerns].  So the kids camp out in the hills, and Chuck takes them food.  They are joined by Della (Wanda Hendrix), a runaway whose uncle (Ed Begley) has improper ideas about her. 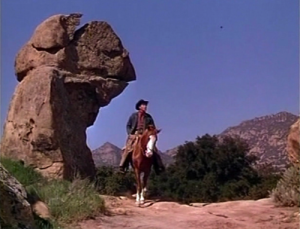 Meanwhile, Higgins is at war with the neighboring Martinez ranch over rustling, and Higgins’ foreman Rocky (John Russell) is developing suspicions about Chuck.  It turns out, however, that Rocky and the Martinez segundo are behind the rustling.  Chuck catches them at it, and they catch him.  The kids and Della manage to bring both Higgins and Martinez factions to Chuck’s rescue.  At the end, Chuck appears to have married Della (despite an age difference of some significance) and taken the boys back to Slim’s ranch to try to make a go of it.

Pleasant enough fare, if unremarkable.  Some plot elements don’t really come together.  In color, although there appear to be different cuts of it.  One version is 90 minutes long; the version shown on the Encore Westerns channel seems to be only 74 minutes.  For Wanda Hendrix in another western, see her in The Last Posse.