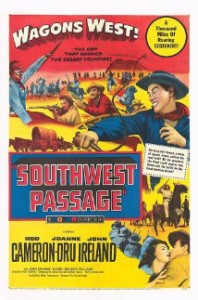 Joanne Dru (the former Joanne Letitia LaCock) was unusually effective in westerns in a time when the casting of most female roles was usually a secondary consideration at best.  Even now, her performances shine in such classics as Red River, She Wore a Yellow Ribbon and Wagon Master.  Like Claire Trevor in Stagecoach, she was excellent at portraying a bad girl who showed signs of turning out well if given half a chance (Red River, Wagon Master).  This particular expertise resulted in her being somewhat typecast in westerns, which was fine when they were at their peak but stalled out her career as they lost popularity by 1960.  She married John Ireland in 1947, and one result was their collaboration in this cavalry and camels vs. Apaches story.

Gunman Clint McDonald (John Ireland), Jeb (Darryl Hickman, a child star of the 1940s) and Jeb’s sister Lilly (Joanne Dru) are escaping with $20,000 taken in a bank robbery, pursued by a posse.  Jeb is shot, and Lilly returns to town looking for a doctor.  The one she finds turns out to be a veterinarian on his way to join a cavalry patrol heading into the desert with camels to survey a new route to California.  McDonald pays the vet for his kit and takes his place, claiming to be the doctor. 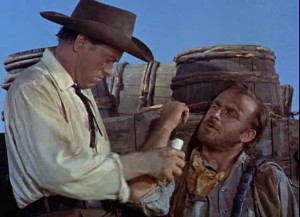 The head of the patrol is Edward Fitzpatrick Beale (Rod Cameron), experimenting with the camels and mapping the Arizona desert.  He is accompanied by three Arab camel drivers led by High Jolly (Hadji Ali, played by Mark Hanna), nasty-tempered head mule teamster Matt Carroll (John Dehner), colorful scout Tall Tale (Guinn Williams) and several cavalrymen, led by Lt. Owens.  Lilly joins them, claiming to have gotten lost from a wagon train; Jeb didn’t survive his wound. Clint is unusually good with a gun for a doctor, and Matt Carroll distrusts Clint, dislikes the Arabs and lusts after Lilly.  Lilly is coming to admire the ambitious but seemingly selfless Beale.

The party is followed by Apaches, who believe the camels are gods, until one of the beasts breaks a leg and has to be shot.  Lilly tries to persuade Clint to go straight, but the lure of $20,000 is too great.  When Tall Tale is bitten by a gila monster, Clint treats the wound but it gets infected.  Although he’s not qualified to do so, he prepares to amputate Tall Tale’s arm, until Lilly speaks up and Clint’s real identity becomes known.  After a fight with Beale, he is exiled from the group, looking for a town 80 miles south, and is joined by Carroll, who wants half the loot.  They find a water hole in the rocks, and Carroll gets the jump on Clint, intending to take both canteens, both horses and all the loot.  But Clint’s non-medical skill with a gun comes in handy, and Carroll ends up face down in the pool. 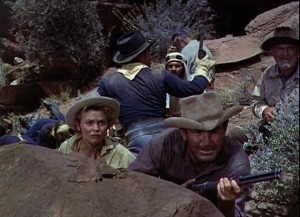 Clint rides back to the patrol with news of water only 30 miles distant, but the Apaches now know that the camels are mortal and attack the party from the rocks around the water.  Clint redeems himself by drawing off the Indians with the remaining camel so the rest of the patrol can make a dash for the water and the protection of the rocks.  When it’s over, he’s wounded but asks Beale to give back the loot to the bank, and he and Lilly are together again.

Although Rod Cameron seems to get top billing, Joanne Dru is the best thing in the movie.  Ultimately Lilly finds Cameron’s character Beale more interesting than we do.  John Ireland was an intriguing mix of hard-edged tough guy with an ability to learn, but he’s never very convincing as the doctor.  John Dehner makes an excellent villain as dastardly muleskinner Matt Carroll.. 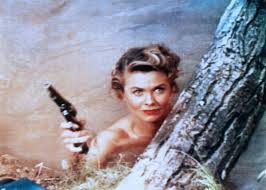 Lilly (Joanne Dru) can defend herself if she needs to.

This was made in the 3-D fad of the early 1950s (like Hondo, Gun Fury, The Stranger Wore a Gun and The Moonlighter), which faded out almost as soon as it began.  There are a couple of things that show a lack of careful direction.  As the patrol drives its wagons along the side of some dunes, Clint and Lilly are riding downhill from them, where they’ll be crushed if the wagons tip over, as it seems they might.  And as Clint rides back to the patrol from the water hole, he leaves Carroll’s body in the water.  With the desert heat and decomposition of the corpse, that will leave the water hole fouled and unusable by the time the patrol gets there. Filmed on location in southern Utah, near Kanab.  The direction is by journeyman Ray Nazarro.  The unexceptional screenplay by Harry Essex has some clunky dialogue, especially Lilly’s lines to Clint about going straight.  In color, at only 75 minutes. 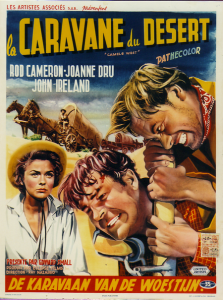 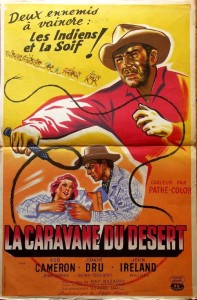 Dru was good in westerns, but she didn’t always enjoy them.  “I simply hated horses,” she said in a 1957 interview with Hedda Hopper.  “And those long gingham dresses with boned bodices are miserable things to wear.”  By the end of the 1950s she had drifted almost entirely into television work, and she and Ireland were divorced in 1957.

Edward Fitzpatrick Beale and his involvement with camels in the American southwest are based on actual history.  In 1857, Lt. Beale, with the support of Secretary of War Jefferson Davis, used 25 camels to survey a route for a wagon road from Fort Defiance in Arizona to the Colorado River, then took the camels on to California.  The Santa Fe Railroad and U. S. Highway 66 subsequently followed this route.  With the outbreak of the Civil War, the Camel Corps was largely forgotten, although there were reports of feral camels in the southwest well into the 1900s—even as late as 1975 in Baja California.  Hadji Ali, an Ottoman citizen, was the lead camel driver of the Camel Corps beginning around 1856 and lived in this country until his death in 1902 in Arizona.  There was even a folk song about him, recorded by the New Christy Minstrels in the 1960s.