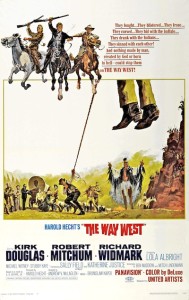 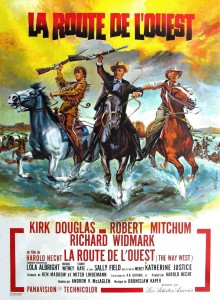 Kirk Douglas was a big star in the 1950s and 1960s, and he tended to indulge in flamboyant dress or other characteristics to emphasize his character in westerns.  (See his clothes in The War Wagon, for example, or the way his gunfighter character in The Last Sunset uses only a derringer.)  He’s the most prominent of the three big stars in this movie, and here the gimmick is the color red.  When we first see his character, he’s wearing a bright red cloak.  He drives a carriage with red wheels and undercarriage, and his Conestoga wagon is painted red.

This story is based on a novel by Montana author A.B. Guthrie, who also wrote The Big Sky and These Thousand Hills, both of which were turned into western movies.  This one tells the fictional story of the first wagon train of settlers going west from Missouri along the Oregon Trail to Oregon’s Willamette Valley in 1843.

The moving force behind the expedition is former senator William J. Tadlock (Kirk Douglas) of Illinois.  He recruits Dick Summers (Robert Mitchum), a mountain man character from The Big Sky, to serve as the scout and guide for the company.  The group includes the Evans family, headed by Lije Evans (Richard Widmark), who is afflicted with the need to constantly move toward the frontier, his longsuffering wife (Lola Albright), to whom the widowed Tadlock is attracted, and their teenaged son Brownie.  There are the McBees, a family from Georgia (headed by Harry Carey, Jr.), taking their nubile daughter Mercy (Sally Field), several young peach trees and a bevy of unconvincing accents to the new land.  Newlyweds Johnnie (Michael Witney) and Amanda Mack (Katherine Justice) are stymied because the attractive Amanda is emotionally unbalanced and unable to face the idea of sex.  There is a stowaway preacher (Jack Elam, previously always a bad guy but about to move into more general character roles), unpersuasive and unattractive in his person and his religion, the first of many such in westerns.  Lije Evans becomes a leader and spokesman for those who don’t like Tadlock’s high-handed, autocratic ways.

They have the usual hardship episodes as they move west, with river crossings and Indian troubles.  Mercy McBee and Johnnie Mack fall together for a night, and as they finish Johnnie hears a sound and shoots at it, only to find that he has killed an Indian boy dressed in a wolf skin.  Although the wagons get away, the Sioux pursue, insisting on retribution for the killer.  Tadlock says the killer will receive white man’s justice—hanging—if they can identify him.  Eventually the discouraged Johnnie Mack gives himself up, and his fate further unhinges Amanda, not to mention leaving Mercy McBee pregnant.  As they cross some desert, the Tadlock carriage, driven by his young son Billy, overturns and kills the boy.  At Fort Hall, now in Idaho, they are welcomed to stay or to switch to a California destination until word gets around (falsely) that a sick member of their party has smallpox.  The local Hudson’s Bay factor can’t get rid of them fast enough then.

After a rebellion against Tadlock, the train arrives at a cliff about 30 miles from their destination.  When an attempt to lower a wagon and its driver goes badly wrong, the party accepts Tadlock’s iron-fisted direction again.  He’s the last to be lowered, but somebody cuts the rope and he falls to his death.  It’s the unhinged Amanda Mack, who holds him responsible for her husband’s death.  Brownie Evans marries Mercy McBee and takes responsibility for her child.  And Dick Summers, now losing his eyesight, heads back for Independence.

This is a glossy and brightly-colored production, episodic in nature.  Except for Fort Hall, there’s no attempt to relate the episodes to actual points on the map.  The actors are fine, but their motivations seem arbitrary and sometimes inconsistent, as if it’s enough just to state them and not to show them developing.  Andrew McLaglen had been a successful television director (especially with Have Gun Will Travel) and had made it into movie directing with Gun the Man Down (1956) and McClintock! in 1963.  His father, Oscar-winning Irish actor Victor McLaglen (The Informer, Gunga Din, She Wore a Yellow Ribbon, The Quiet Man, etc.), had been one of John Ford’s favorite actors, and Andrew had connections with John Wayne and his production company through that association.  But something of his direction stayed rooted in television, although he continued to direct the occasional western movie for decades.  Douglas, Mitchum and Widmark all produced better performances elsewhere.

Visually, you can see some of the difference by comparing the lowering of wagons down the cliff to a similar sequence in Raoul Walsh’s The Big Trail from more than 35 years earlier.  Although the Walsh film is in black and white, the visual effect is much more striking and memorable in the earlier film than in McLaglen’s large-scale color production.  The intention was obviously to produce an epic here, too, but it didn’t work out as well.  Reviewer Bosley Crowther wrote in the N.Y. Times:  “It is hard to believe that anybody could have made such a hackneyed hash of that fine A. B. Guthrie Jr. novel, The Way West, as [producer] Harold Hecht and Andrew V. McLaglen have in the Western movie of the [same] title…”  It’s watchable, but not terribly memorable.  Shot at various locations in Oregon (Bend, Eugene, Mt. Bachelor, Crooked River Gorge, and the actual Willamette Valley), at 122 minutes. 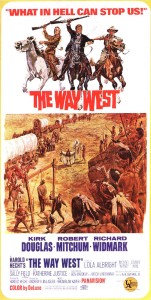 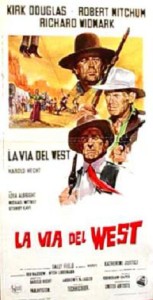