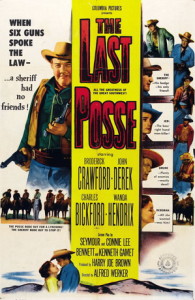 Aging, heavyset Broderick Crawford would seem to make an unlikely leading man, but he was the lead in two “last” westerns in 1953:  The Last Posse and Last of the Comanches.  He’d won the Best Actor Oscar for playing Willie Stark in All the King’s Men (1949) and was moving more into television work, where he would make his mark in Highway Patrol.  And he still had a few westerns left in his career.

This one takes place in Roswell, New Mexico, where the sheriff is hard-drinking John Frazier (Broderick Crawford), who once played a significant role in cleaning up the town.  Now it’s mostly peaceful, but not as peaceful as it may seem.  The posse of the title rides back into town at the start of the film, weary and with Frazier seemingly wounded, but without prisoners or stolen money.  Most of the story is told in flashbacks. 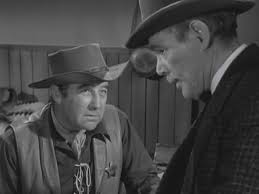 The three Romers, rancher Will (Todd Mitchell) and his sons George (Guy Wilkerson) and Art (Skip Homeier) have been unfairly treated by bigger rancher Sampson Drune (Charles Bickford at his most cantankerous).   When they seek redress, they get into a fight with Drune’s adopted son Jed Clayton (John Derek).  Drune concludes a big cattle sale for $205,000 and attempts to deposit the money in the local bank, when it is stolen by the Romers, who take off into the desert with it.  Drune and Clayton head the posse chasing them, which includes the most prominent of the local citizens—the banker and the store owner among them.  Frazier is given an out, but he joins them, too.  He knows, as Jed does not, that Drune killed Jed’s father, and Frazier suspects that Drune has something similar in mind for the Romers, who also know what he’s done.

During the pursuit in the desert, Drune and Clayton get ahead of the rest of the posse, but Frazier knows the desert well and cuts them off.  Drune knocks Frazier off his horse, but Frazier nevertheless reaches the Romers first as they seek refuge in some rocks.  As they try to get away, George Romer falls to his death, and Will and Art surrender to Frazier. 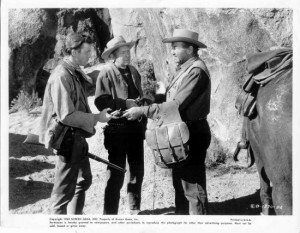 [Spoilers follow.]  As Frazier takes custody of the two arrested Romers, the rest of the posse rides up.  Sampson Drune guns down both Romers, and gets Frazier at least twice as well, as Frazier tries to tell Clayton the truth about Drune.  Clayton reflexively kills Drune.  By the time the posse arrives back in Roswell, Frazier is in very bad shape.  Posse members have agreed to tell a story that has all Romers and Drune being killed in a shootout in the desert.  Clayton will inherit the large Drune ranch, and the others will split up the $205,000, after claiming it was lost in the desert.

As the judge starts an inquest that evening, things proceed as planned, except that Frazier struggles into his clothes and with great difficulty takes a seat at the proceeding.  His presence convinces Clayton to tell the truth to the judge about what happened.  At the end Clayton re-unites with girlfriend Deborah (Wanda Hendrix), and it is discovered that Frazier had died of his wounds about the time he sat down.  They didn’t need to tell the truth after all, leaving the town’s leading citizens to wallow in their own collective hypocrisy. 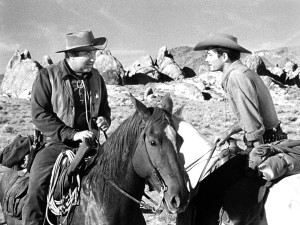 Crawford makes an effective sheriff here, the most honest character in the movie although he is either drunk, hung over or badly injured for much of the film.  He does some strenuous riding in the desert, down steep slopes and falling off his horse at least three times, where it is apparent that it is a skinnier stunt double doing the riding and falling.  Skip Homeier does his usual “kid with a gun” sort of performance (The Gunfighter, Ten Wanted Men, Dawn at Socorro, The Tall T, Comanche Station) in a limited role.  He was never a leading character in them, but he managed to be in a surprising number of good westerns.  Charles Bickford is unpleasant (as he could be in real life, apparently; see The Big Country), spiteful and unscrupulous the entire movie.  John Derek does not seem to be much of an actor, and will soon move into photography and become better known for his series of wives than for his acting career.  Wanda Hendrix’s character is extraneous.  The fussy Henry Hull is a whiskey drummer to whom Frazier tells key parts of his story.

This was produced by Harry Joe Brown, experienced with westerns and now remembered principally for his work with Randolph Scott and Budd Boetticher.  In black and white, with a lot of plot for 73 minutes.

For Broderick Crawford in another western role, see him as bad guy Vinnie Harold, challenging Glenn Ford in The Fastest Gun Alive (1956).   Director Alfred Werker also made At Gunpoint (1955), with Fred MacMurray.