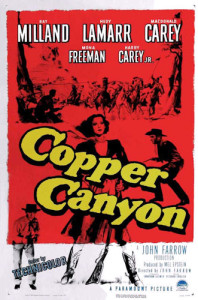 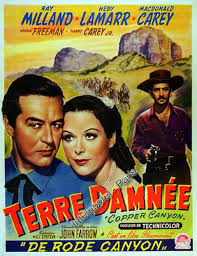 Welsh actor Ray Milland didn’t make many westerns, and the best of the few he did make is probably A Man Alone (1955).  The beautiful Austrian actress Hedy Lamarr made even fewer; this movie, from late in her career, seems to be her only western.  Nevertheless, they both show up in this watchable and busy story of North-South disputes and nefarious doings in a post-Civil War western mining town.

Shortly after the Civil War, a group of Confederate veterans approaches Johnny Carter (Ray Milland), who has a stage sharpshooting act.  They are under the impression that he is Col. Desmond, a former southern commander from Virginia.  Captured and placed in a prisoner of war camp during the war, he escaped with $20,000 the camp commandant had; as a consequence, he’s still wanted by the federal authorities, even though the war is over.

The southerners are mining copper but find themselves oppressed by a corrupt local regime in Coppertown and are unable to get their ore to market.  Carter denies that he is Desmond but shows up in Coppertown to put on his act in the local saloon, run by the beautiful and exotic Lisa Roselle (Hedy Lamarr).  Both Roselle and deputy sheriff Lane Travis (Macdonald Carey) have been sent to Coppertown by the mysterious Mr. Henderson (Ian Wolfe) to keep the southerners from smelting and marketing their ore so he can buy them out cheaply. 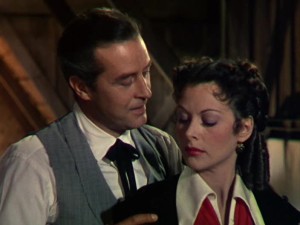 Carter strikes up a relationship with Roselle to the irritation of Travis, who has been trying to develop his own interests there.  While Roselle tries to keep Carter involved with her and not joining a miner’s wagon train to Mesa City, he slips out to give the miners cover by pinning down Travis’ attacking men.  Back in Coppertown, he is betrayed and framed for the robbery of the $160,000 in proceeds from Mesa City.  Carter has finally persuaded Balfour, owner of the local smelting facility, to allow the southerners to use it, but Travis shoots Balfour in the back.  With Roselle’s help Carter gets out of jail and stops the cut-rate sale of claims to Henderson.

Using military skills, Carter organizes an attack on Travis and his men at the smelter, with the support of the local cavalry Lt. Ord (Harry Carey, Jr.).  He wins a shootout with the nefarious Travis.  At the end he takes the stage out of town with Roselle, never having admitted that he is Desmond–if he is.  Lt. Ord is promoted to captain.  And Carter and Lisa take off for Sacramento and San Francisco to start a new theater, with $20,000 Carter happens to have in the lining of his gun case. 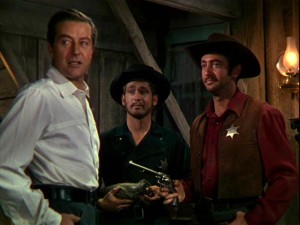 While pleasant and watchable fare, this isn’t terribly memorable.  There doesn’t seem to be a lot of chemistry between Milland and Lamarr, as the attraction of these characters to each other overtakes their competing agendas.  According to stories from the production, the two leads couldn’t stand each other.  Milland doesn’t seem like much of a southerner.  Undeniably beautiful (and reportedly very intelligent as well), Lamarr doesn’t exude much warmth.  There are a lot of characters, many of whom remain underdeveloped. Six-foot two-inch Hope Emerson could be excellent in character parts (see her in Westward the Women [1951], for example), but here she is underused as Ma Tarbet, a bartender and associate of Roselle.  Philip Van Zandt is the cheerfully corrupt sheriff of Coppertown, dominated by his deputy Travis.  Harry Carey, Jr., is fine in one of his young lieutenant roles (She Wore a Yellow Ribbon, 1949; Rio Grande, 1950).  Macdonald Carey usually appeared in westerns with much lower budgets and less upscale casts, but he makes an excellent villain here. 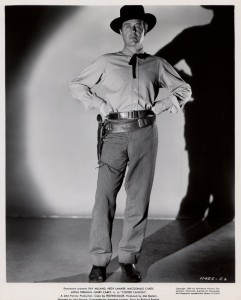 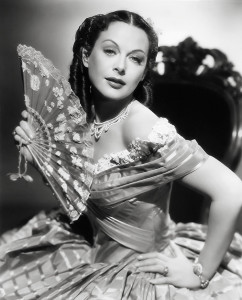 Director John Farrow’s best-known western is Hondo (1953), although there are stories he didn’t finish that one.  This is in lively color, with a lot of plot for its 84 minutes.