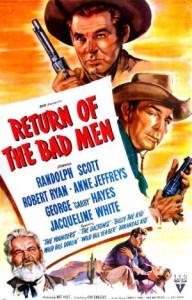 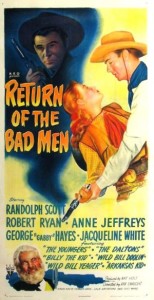 Indian Territory Marshal Vance Cordell (Randolph Scott) is retiring as a lawman to marry Madge Allen (Jacqueline White), the young and attractive widow of another lawman.  Early in the movie is the 1889 Oklahoma land rush, and the hasty settlement of the town of Guthrie.  The local military authority persuades Cordell to accept a temporary appointment as marshal, just in time for a gang of all the known outlaw names of the old west to start a crime spree (Youngers [out of commission since 1876], Daltons, the Arkansas Kid, Billy the Kid—who was long dead by 1889—and especially the Sundance Kid [Robert Ryan]).  They’re led by Bill Doolin (Robert Armstrong), whose niece Cheyenne (Anne Jeffreys) decides to go straight and joins Cordell as his assistant.

It’s all very counter-historical, and somewhat formulaic.  Gabby Hayes as a toothless bank president?  That’s neither formulaic nor believable.  Things work out as you’d expect.  There’s supposed to be some sexual tension with Cordell and Cheyenne, and some competition between Madge and Cheyenne, but since Randolph Scott’s in his ultra-straight mode you know how that’s going to work out, too.   Cheyenne’s more interesting than Madge, though, and it makes you wonder about Cordell’s judgment.  Note also that the actress playing Cheyenne (Anne Jeffreys) gets higher billing than the one playing Madge (Jacqueline White).  There is a good performance by Robert Ryan as a hard, ruthless Sundance Kid. 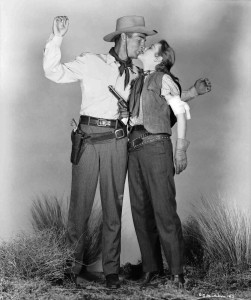 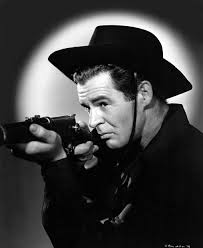 The “return” of the title is an apparent reference to a successful film Scott and Hayes had made two years earlier, also about a law officer in Oklahoma territory:  Badman’s Territory (1946).  This is not really a sequel in any meaningful sense, except that it also includes a variety of unrelated and implausibly-gathered outlaws.

For another western in which Randolph Scott works things out with a woman (Angela Lansbury) unalterably opposed to his being a lawman, see A Lawless Street.  One recurring lesson seems to be to watch out for the attractive young widows and daughters of deceased lawmen—they tend to want you to leave the profession. (See The Tin Star, for example.)

Note: This is at least the third movie in which Randolph Scott’s character is named Vance, along with Virginia City and Western Union, which are both better than this is. 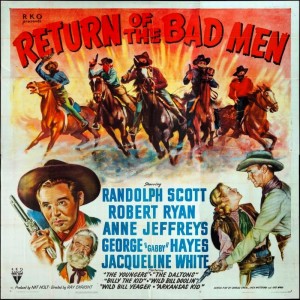