Shooting Stars: A Ranking of the 29 Greatest Western Actors Since 1939
Part 1—The Top Five 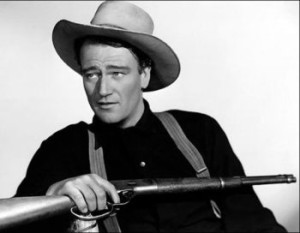 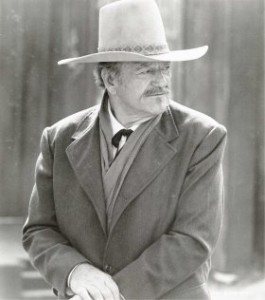 Wayne’s image is the first that comes to mind when we consider westerns between 1939 and the present.  He made many forgettable westerns while learning his craft during the 1930s in low-budget quickies, but beginning with Stagecoach in 1939 he made a surprising number of appearances in really good westerns.  While his career in westerns included a number of duds and clunkers, particularly toward the end (The Undefeated, Rio Lobo, The Train Robbers, etc.), for a long period he was consistently good—and often great.

Although, like most male stars, he sometimes seemed to show up in roles too young for him as he aged, he was more successful than most at playing age-appropriate roles as he grew older.  He successfully played older than he was in Red River and She Wore a Yellow Ribbon, and he moved into more mature roles naturally in The Searchers and Rio Bravo.  (He’s probably too old for Angie Dickinson in Rio Bravo, but somehow it works.)  He even made a couple of great westerns during the final stage of his career (The Cowboys, The Shootist).

Some of his position at the top of this list is due to his long-time relationship with John Ford, the greatest director of westerns, which helped both of them earn their pre-eminence in the field.  But he also made very good westerns with directors Howard Hawks, John Farrow, Don Siegel and others. 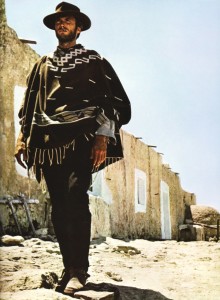 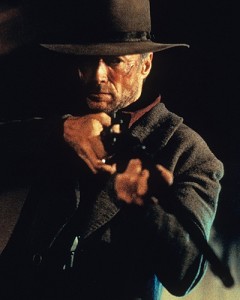 Eastwood is the greatest living star in westerns, although he is now in his 80s and is unlikely to make any more westerns either as a leading man or as a director.  Remarkably, he accomplished this mostly during a period when westerns were out of cinematic fashion; although he didn’t appear in nearly the number of westerns John Wayne did, his high position on the list results from the unusually high quality of the few westerns he did make.  Beginning with his central role in Sergio Leone’s influential Man With No Name Trilogy in the 1960s, he went on to appear in good westerns in the 1970s (Hang ‘Em High, for example) and to direct better ones with himself as the star (High Plains Drifter, The Outlaw Josey Wales, Pale Rider, Unforgiven).  Director Eastwood benefited from having an iconic western star (actor Eastwood) at the center of his films, and he knew how to use him. 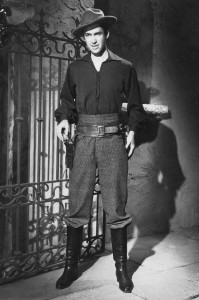 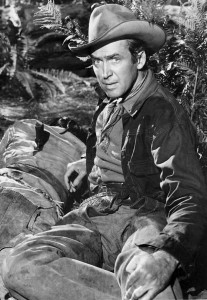 3.  James Stewart  [Destry Rides Again, Winchester ’73, The Naked Spur, The Man from Laramie, Night Passage, Two Rode Together, The Man Who Shot Liberty Valance, Bend of the River, The Far Country, Shenandoah, How the West Was Won, Firecreek, The Rare Breed, Bandolero!, The Cheyenne Social Club, The Shootist, et al.]

Before leaving for World War II, he made his reputation in modern films by Frank Capra and The Philadelphia Story (1940), directed by George Cukor.  His only western in that period was 1939’s Destry Rides Again.  Upon returning from the war, he revived his film career once again with Capra (It’s a Wonderful Life) and by working with such directors as Alfred Hitchcock, Delmer Daves and Anthony Mann.  His high position on this list is due to the five films he made with Mann, in which he usually played a character on the psychological edge in some way.  Between them, Mann and Stewart re-defined in many ways the world of western movies and the stories they told.  The quality of westerns he made in the 1960s after his relationship with Mann fell apart tails off noticeably, although he made three late westerns with John Ford, one of which is particularly memorable (The Man Who Shot Liberty Valance). 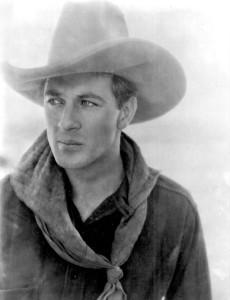 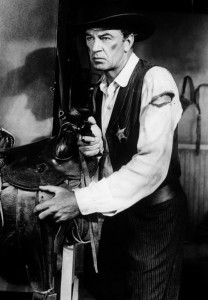 Dave Kehr sees him as John Wayne’s principal rival.  “Cooper, for whom the words lanky and laconic seem to have been invented, was identified by the Department of the Treasury as the nation’s highest paid wage earner in 1939….the mildly satiric Westerner (William Wyler, 1940) already finds Cooper playing an inflated archetype — the Man of the West — rather than a character, much as he would in his most overrated film, Fred Zinnemann’s didactic political fable High Noon (1952).”

In his biography of Gary Cooper, Gary Cooper, American Hero (Robert Hale, London, 2001), Jeffrey Myers quotes Robert Warshow’s essay on westerns:  “The romantic image of the cowboy as the embodiment of male freedom, courage and honor was created by men who had lived a rugged life in the West:  in words by Teddy Roosevelt and Owen Wister, in art by Frederic Remington and Charles Russell, and in film, preeminently, by Gary Cooper.”  Cooper was an authentic westerner from Montana, and he had a natural way with western roles.  Cooper would challenge John Wayne for the top spot on this list, except that he didn’t make many westerns during the 1940s when his career was at its peak.  His reputation in westerns was substantially made by movies released before 1939, until he revived his career in the 1950s beginning with High Noon.  One consequence of this career arc is that in several of his best westerns from the 1950s he seems too old for the roles in which he’s cast.  He’s good enough that we mostly look past that, though. 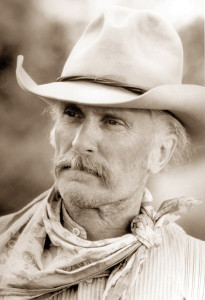 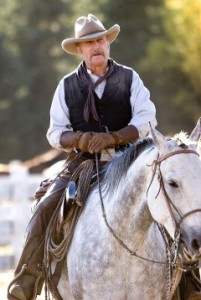 His position on this list comes from what Duvall refers to as his Trail Boss Trilogy (Lonesome Dove, Broken Trail, Open Range).  In all of them he plays a trail boss moving his herd somewhere against considerable obstacles.  These three are of surprisingly high quality, despite the fact that two of them were not movies but were made-for-television miniseries.  Like Wayne, Eastwood and Stewart, Duvall has benefited from working with unusually capable directors of westerns, John Sturges, Simon Wincer, Walter Hill and Kevin Costner among them.  His Augustus McCrae (Lonesome Dove) is one of the most indelible characters in the history of westerns.

At an age similar to Eastwood’s, his career also took place largely during a period when not many westerns were made.  His Best Actor Oscar comes from a modern western of sorts; he played country singer Mac Sledge in Tender Mercies (1983).  If you like him in more traditional westerns, give Tender Mercies a try.  He is one of the pre-eminent movie actors of his time generally, not just in westerns.  Unlike the others this high on the list, he has seldom played a conventional romantic lead.