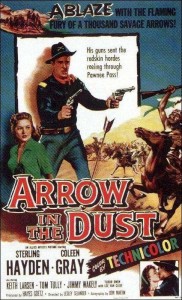 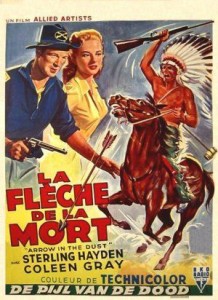 Prolific director Lesley Selander seldom had a lot to work with, either in terms of budget or with casting.  This is one of his better casts.  Sterling Hayden was in a number of westerns and other movies in the mid-1950s, most notably Johnny Guitar (also from 1954).  Coleen Gray is now remembered principally as the girl on the wagon train John Wayne leaves behind in Red River (1948), only to see the Comanches slaughter the rest of the train—and for a smattering of films noir (Kiss of Death, Copper Sky).  Both Hayden and Gray appear together again in Stanley Kubrick’s film noir The Killing (1956).  This is both a wagon train and a cavalry story–as the poster proclaims, a “Flaming Saga of the Savage West.”

Here army deserter Bart Laish (Sterling Hayden) is on the run, somewhere east of Fort Laramie in western Nebraska-eastern Wyoming.  In Indian country, he’s trying to link up with a wagon train for safety as he makes his way west.  This is generally Sioux country, but the Pawnees seem to be on the warpath as well.  He hears of a Major Andy Peppers heading to take command of Camp Taylor, and finds the remnants of a small burnt-out wagon train, with Peppers dying in one of the wagons.  Peppers, it turns out, is his cousin, and they had started at West Point together before Laish had dropped out to become a gambler and gunfighter.  The dying major tries to persuade Laish to find a way to rescue the wagon train ahead.

Maj. Andy Peppers:  “It doesn’t matter what you’ve been or what you’ve done.  There must still be some good left in you.  Or have you changed so much, Bart?” 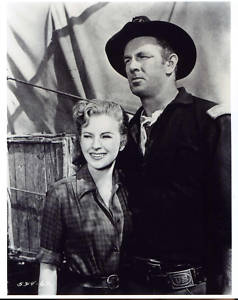 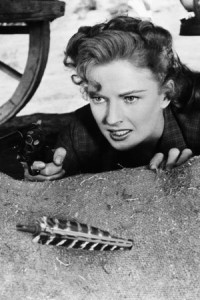 Stars Coleen Gray and Sterling Hayden in a publicity still.  And feisty doctor’s daughter Christella Burke (Coleen Gray) fights the attacking Pawnees with the best of them.

Camp Taylor, too, is burned out, and Laish dons Peppers’ uniform and insignia of rank.  He comes upon the wagon train, and he claims to be Peppers.  The few remaining troopers, led by Lt. Steve King (Keith Larsen), take him at face value; the experienced scout, Crowshaw (Tom Tully), has reservations but goes along.  The train itself includes attractive young Christella Burke (Coleen Gray), in whom King is interested, and freighting businessman Tillotson (Tudor Owen) with several wagons.  Laish-Peppers does well enough as the train is under almost continual attack, but Crowshaw knows he’s not Peppers.  They lose people and wagons fighting Pawnees and allied Apaches (?), but get ever nearer to Fort Laramie.  Finally, they discover Tillotson is hauling new Henry repeating rifles, and that’s really what the Indians want.  Tillotson is killed trying to attack Crowshaw, and they destroy his wagon, while Laish-Peppers is wounded fighting a rear guard action while the train moves out.

Laish had intended to leave the train before Fort Laramie to head south for Santa Fe.  But now Christella, who knows his story, Crowshaw and Lt. King will all speak up for him based on how he got the wagon train through, and he decides to go into Fort Laramie with the train.  In 1954, Laish and Christella weren’t allowed to just take off together for California, as they probably would have in real life.  Laish has to face the music, even though it will happen after the end of the movie.  For similar endings, where somebody who’s committed a crime has to give himself up instead of just moving on, see Four Faces West [Joel McCrea], Face of a Fugitive [Fred MacMurray] and The Moonlighter [MacMurray again].  The alternative seemed to be expiating one’s sins by taking a bullet (fatally) while doing something honorable, as Randolph Scott did in Western Union, and not getting the girl. 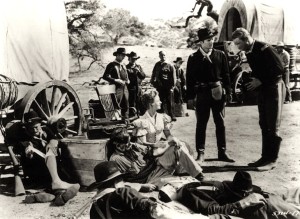 This is a fairly good story, but it is marred by Selander’s pedestrian direction and by Hayden’s stiff, unnatural demeanor as the false Peppers.  Nevertheless, it’s one of Selander’s better films.  Coleen Gray is very good, and so are Tom Tully and some of the other supporting players.  Lee Van Cleef is one of Tillotson’s henchmen; he does not survive the movie, like his boss.

The writing, by Don Martin. is not dazzling.  In color, at 79 minutes.  Many of the prints of Selander’s low-budget movies from this period were not of good quality originally or have become dingy through poor preservation. 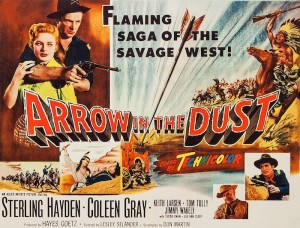