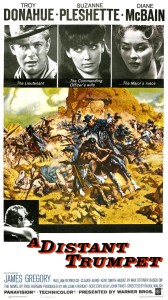 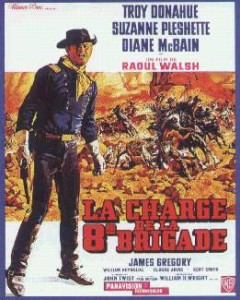 This ambitious film is a highly fictionalized retelling of the surrender of Geronimo (here called War Eagle) and the supposed role of young Lt. Gatewood (here called Matt Hazard) and Gen. George Crook (here named Alexander Upton Quait).  It’s all based on a novel of the same name by Pulitzer Prize-winning historian Paul Horgan, and it’s famed director Raoul Walsh’s last western, and his last movie of any kind.

Fresh from West Point, young 2nd Lt. Matt Hazard (Troy Donahue) is sent to dusty Fort Delivery in southern Arizona Territory, where boredom seems as much an adversary as War Eagle’s Apaches, lurking over the border in Mexico’s Sierra Madres.  Bringing with him White Cloud as an Apache scout, he finds the men at Fort Delivery lax and undisciplined.  The temporary commander of the fort is Lt. Mainwaring (William Reynolds), whose wife Kitty (Suzanne Pleshette) is the only woman at the post.  Mainwaring leads a detail off to retrieve long-requisitioned replacement mounts, while Kitty is supposed to head back to Washington, D.C.  While out collecting lumber, Hazard and his detail are attacked.  The men react badly and flee; Hazard fights and is separated from them.  He rescues Kitty Mainwaring, who was also attacked by Indians, and they spend the night in a cave together before returning to the fort.  Hazard’s attentions are now consumed more by Kitty than they are by his own distant fiancée Laura Frelief (a very blonde Diane McBain), niece to bachelor Gen. Alexander Upton Quait (James Gregory), a famous Apache fighter.

Hazard works at shaping up the men, including the uncooperative Sgt. Kroger.  He also resists the corrupting influence of Seely Jones (Claude Akins) and his troop of prostitutes.  While on patrol, Hazard finds Mainwaring and his men all killed, and uses the opportunity to steal back the remounts and other horses from the Apaches.  Upon returning to the fort, he finds Laura there, along with a new commanding officer, Maj. Hiram Prescott.  Hazard seems more attracted to the newly-widowed Kitty Mainwaring than to Laura, and Laura senses that while making plans for them to be married as quickly as possible. 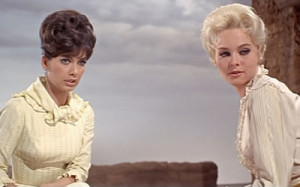 An inquiry led by Gen. Quait seems to take Hazard and Prescott to task, but it’s a sham.  Quait is impressed by Hazard as he leads his men into a battle which is technically a victory but results in War Eagle retreating into Mexico again.  Hazard is sent with White Cloud to persuade War Eagle to surrender on generous terms from Quait.  When Hazard returns successfully, he finds that Quait is no longer in charge, that the terms have been changed, and that all the Indians, including the faithful White Cloud, are to be sent to Florida.

Hazard is summoned to Washington, where he is awarded the Medal of Honor for his feat and promoted to captain long before he otherwise would have been.  Feeling betrayed, however, he and Quait both resign in an attempt to get Pres. Chester Arthur to reverse some of the decisions made.  In the end, Capt. Hazard is shown commanding Fort Delivery and married to Kitty Mainwaring.

At the big battle.

Troy Donahue and Suzanne Pleshette had enjoyed success with 1962’s Rome Adventure, and Warner Bros. apparently thought their casting in this cavalry tale would appeal to younger audiences.  The year this film was released, Donahue (real name: Merle Johnson) and Pleshette were married in January and divorced in September.  (Donahue was married four times, and none of the marriages lasted longer than a couple of years.  In Hollywood he was widely known to be gay, although the general public didn’t share that knowledge until later in his life.)  Donahue was very attractive in a blonde, hunky sort of way, but as an actor he was limited, and his film career was entering its downhill side as his limitations became more apparent.  The romantic triangle in this film looks doomed from the start, with the fiancée (Diane McBain) played rather unattractively.  Neither 77-year-old director Walsh nor star Donahue would ever make another western; Suzanne Pleshette would show up again in a few years in the comedy Support Your Local Gunfighter (1971), with James Garner and Jack Elam.

Obviously intended as a large-budget epic, the movie feels more lightweight than that.  It is visually impressive, with excellent cinematography by William Clothier, and music by Max Steiner.  Shot in color on location in northern Arizona and around Gallup, New Mexico, at 117 minutes.

Lt. Hazard and White Cloud on their big mission.

A better version of the Geronimo-Gatewood story, using the real names, is Walter Hill’s Geronimo:  An American Legend (1993), with Jason Patric, Matt Damon, Robert Duvall and Gene Hackman.  In fact, after Gen. George Crook had done the hard work of getting Geronimo to surrender (a second time), he was supplanted by Nelson Miles, who took the credit and shipped both Geronimo and the Apache scouts who had supported the cavalry off to Florida.  Geronimo died in 1911 at Fort Sill in Oklahoma, having never seen his homeland in Arizona again.  The real disillusioned Lt. Gatewood did not receive the Medal of Honor.