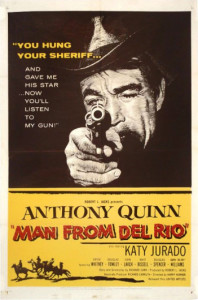 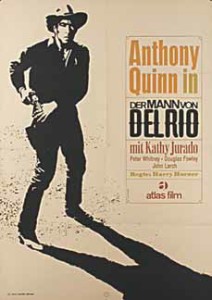 Anthony Quinn played the lead in a couple of small but good westerns in the mid-1950s.  One was The Ride Back (1957), with William Conrad; and this was the other.  It clearly had a small budget and a director otherwise known principally for television work, but it was good.

It presents an unusual social twist on a traditional western gunfighter story, this time with a Hispanic slant.  As the movie opens, gunman Dan Ritchy rides up to a saloon in the town of Mesa, a quieter version of Hays City, Ellsworth and Dodge City on the cattle trails north from Texas to the railroads in Kansas.  He encounters a down-at-the-heels cowboy, who stops him and asks if he remembers Del Rio five years ago, where he killed three men.  A fourth was with them:  Dave Robles (Anthony Quinn), who says that it has taken him five years to learn how to use a gun.  He’s wounded in the exchange, but Ritchy is dead. 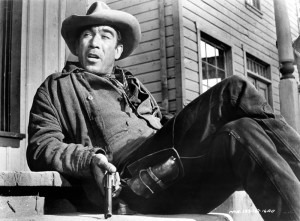 The cantankerous local doctor, Doc Adams (Douglas Fowley), whose sign advertises that he is also the dentist, undertaker and veterinarian, patches Robles up, and Robles meets the doc’s housekeeper and medical assistant Estella (Katy Jurado).  Back at the saloon, the proprietor Ed Bannister (Peter Whitney) chats Robles up.  He claims to have been a gunman when he was younger, and he apparently invites gunmen to town (as he did Ritchy) in the hopes of finding one that will buy into his vision of the town as a more vigorous trail town.

As Robles tries to get to know Estella better, she’s having none of him.  Three more of Bannister’s potential gunmen come to town, and they tie up the sheriff in a tree to use for target practice.  When they want to make off with Estella, Robles shoots it out with them and wins.  (If one of the three looks familiar, that’s because it’s Guinn “Big Boy” Williams, in an uncredited role.)  Impressed, the local town fathers offer him the job of sheriff at $100 a month and lodging, along with new clothes. 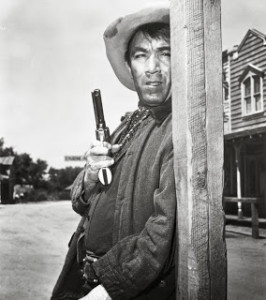 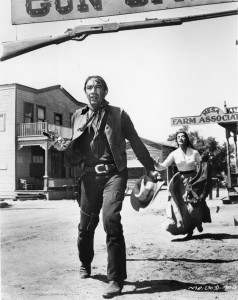 Dave Robles (Anthony Quinn) has reason to be wary, even after he is made sheriff of Mesa.  And Estella (Katy Jurado) tries to dissuade Robles from a showdown with Bannister.

But the job and situation are not as good as Robles thought.  Social acceptance does not come with the job, and when he attends a dance, neither Estella nor any of the other respectable women in town will dance with him—apparently because he is Latino and a gunman.  When Ed Bannister renews his offer because Robles is drinking heavily and feeling ostracized by the community, the two get into a fight.  Robles wins, but he breaks the wrist on his gun hand.  Notwithstanding that, he is successful at running out a young gunman who thinks he can go along with Bannister’s plan.  And he gives Bannister until noon the next day to leave town.

The town drunk Breezy (Whit Bissell) tells Bannister what he has overheard at the doc’s office (he was sneaking the doc’s booze) about Robles’ wrist, however, and Bannister now thinks he can take Robles.  As Robles goes to meet Bannister, Estella begs him to leave town instead (shades of Grace Kelly and Gary Cooper in High Noon, with the same result).  Robles walks purposefully toward Bannister in the street, taking off the wrapping on his wrist, although we know he can’t move his fingers.  Bannister braces to meet him, and … 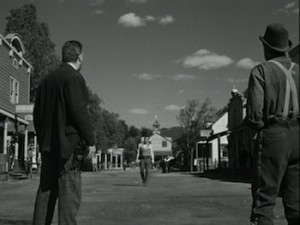 Well, watch it and see. The result is both consistent with Robles’ character as we have come to know it, and with his medical situation.  Although it’s not a long movie at all, it takes its time as Robles develops from the penniless, good-with-a-gun near-alcoholic he was at the start to whatever he may be at the end.  Like The Ride Back, this is largely a character study, and it’s good, if not quite as good as The Ride Back.  Both Anthony Quinn and Katy Jurado were very good actors, and they carry this film, although Estella’s transition to being fond of Robles is sudden and not entirely persuasive.

For Anthony Quinn as a quasi-villain in bigger westerns, see Last Train from Gun Hill (1959) and Warlock (also 1959), where he brings a dimension of humanity to what would otherwise be standard bad-guy roles.  Katy Jurado is remembered mostly for her excellent performance in High Noon, but she’s also good in The Badlanders (1958), with Alan Ladd.  Peter Whitney has another role as a bad guy in Domino Kid (1957), with Rory Calhoun. 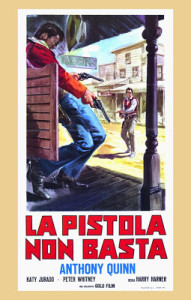 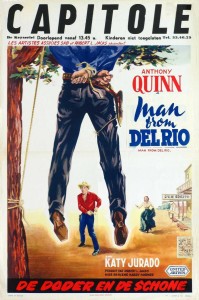 Filmed In black and white at Gene Autry’s Melody Ranch in Placerita Canyon in southern California (destroyed by fire in 1962), at 82 minutes.