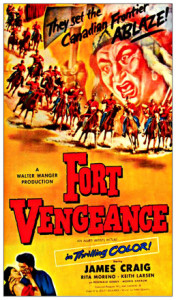 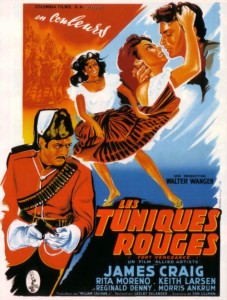 This low-budget effort from journeyman director Lesley Selander is a northern western.  It takes place in Canada, during Sitting Bull’s sojourn there after fleeing the U.S. in the wake of the Battle of Little Bighorn.  (See Saskatchewan [1954], with Alan Ladd, for another story of Mounties and Sitting Bull in Canada.)

The Ross brothers, Dick (James Craig) and Carey (Keith Larsen), head north from Montana into Canada, pursued by a posse that pulls up at the international border.  Riding into Fort Vengeance, said to the western headquarters of the Mounties (that would actually have been Fort Macleod in southwestern Alberta), Dick applies for a position as a Mountie, although Carey has reservations.  Inspector Trevett (Reginald Denny) leads the Mounties out to the camp of Blackfoot chief Crowfoot, whom Sitting Bull has been trying to convince to join him in an uprising. 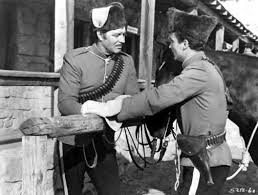 Out scouting one day, Carey sees trapper Luboc stealing a cache of Blackfoot furs and convinces him to share the stolen proceeds.  However, Crowfoot’s son Eagle Heart is the owner of the furs and complains to the authorities.  Trader Fitzgibbon has bought the furs, but Eagle Heart can identify them.  Fitzgibbon fingers Luboc as the seller and probable thief.  But Carey gets to the trapper’s cabin first, kills Luboc and then disappears.  Dick goes after and finds him; while Dick is making the arrest Carey is shot by a Sioux warrior.

Meanwhile, Eagle Heart has been blamed for Luboc’s killing, but Dick showing up with Carey’s body and telling the real story vindicates him.  Having seen the Queen’s justice to work in fairness to the Blackfeet, Crowfoot declines to join Sitting Bull. 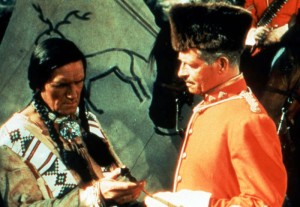 Blackfoot chief Crowfoot finds that the Queen’s justice is good.

On the whole, this is lacking in star power and is not one of Selander’s most memorable works.  Rita Moreno plays the half-Indian daughter of Fitzgibbon; Selander often used her as an Indian or Mexican maiden at this early stage of her film career (see Yellow Tomahawk, for example), which she performed without much subtlety.  All the Indians look like white actors, and Sitting Bull is much too young.  If it doesn’t look much like Canada, it was shot at the Ray Corrigan ranch in Simi Valley in southern California.  The red coats and fur hats must have been uncomfortable.

Crowfoot was an actual Blackfoot chief in Canada.  Victor McLaglen’s son Andrew is listed as an assistant director on this, learning his trade before going on to direct Gun the Man Down, McLintock! and The Way West.  In dingy color, at 75 minutes.