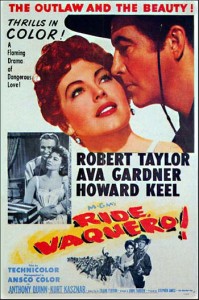 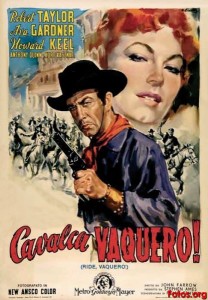 This story takes place immediately after the end of the Civil War near Brownsville in southern Texas, on the Mexican border.  José Esquedo (Anthony Quinn) is the leader of a large gang of banditos and outlaws, with whom the law in the area (Ted de Corsia) does not have the resources to cope.  Esquedo’s right-hand man is his foster brother known only as Rio (Robert Taylor, with a lot of makeup, showy gun rig and leather cuffs).  With the end of the war, military resources in southern Texas are being beefed up.

King Cameron (Howard Keel) has bought up a lot of land in the area, and at the start welcomes his new wife Cordelia (Ava Gardner) to southern Texas.  Esquedo and his men keep burning ranches to keep out ranchers, settlers and their accompanying law.  Cameron stubbornly keeps rebuilding.  Rio has met Delia and is apparently attracted to her, but he says and does nothing that would give that away.

Rio to Esquedo:  “Why do you talk to me this way?  You wouldn’t kill anything…unless it was alive.” 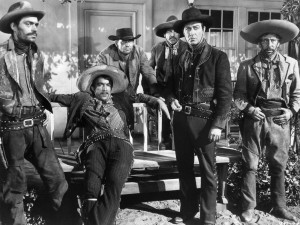 As the conflict between Cameron and Esquedo escalates, Rio is sent to burn Cameron’s newest ranch house, which is well-fortified.  Before the task is complete, a cavalry unit shows up, and Rio and his men have to run for it.  Pursued closely by Cameron, Rio’s horse stumbles and throws him. Captured by Cameron, Rio then promises to help him round up and bring back horses from Mexico in return for Cameron not turning him over to the law or shooting him.  So the central conflict in the film is about Rio and his struggles with the ideal of loyalty.

Rio keeps his promise, to the disgust of Esquedo.  As Cameron leaves on an extended trip to purchase equipment, Rio is in effect his foreman.  Delia insists on being taken to Esquedo to try to talk him out of his war with Cameron.  Despite misgivings, Rio takes her.  The meeting goes badly, but Esquedo allows Delia and Rio to leave; he’s sure that Rio will come to his senses and rejoin him if given time.  Back at the Cameron ranch, Delia kisses Rio, and despite his attraction to her, he is horrified at her lack of loyalty to her husband, and he disappears.

José Esquedo: “The strong will fight the strong for possession of the weak.”
Cordelia Cameron: “The meek shall inherit the earth.”
José Esquedo: “Only six feet of it, Senora.” 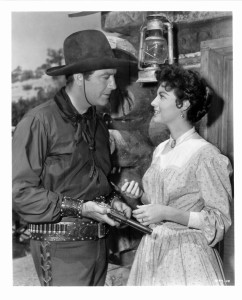 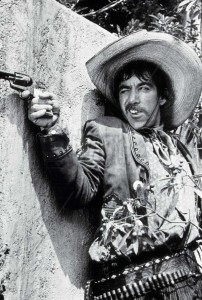 Rio (Robert Taylor) and Cordelia Cameron (Ava Gardner) get to know each other.  And Esquedo (Anthony Quinn) takes aim.

Finally Esquedo loses patience and takes over Brownsville with his men, killing the outgunned sheriff, looting the bank and local saloons.  As Esquedo’s men hear of approaching cavalry, they begin to desert him.  Cameron returns to Brownsville and stands up to Esquedo, although he can’t really match him with a gun.  Finally, Rio takes on the increasingly irrational Esquedo in the saloon where he’s about to kill Cameron and demonstrates finally where his loyalty lies.

John Farrow was not really a great director of westerns.  His best western, Hondo, was at least partially directed by John Ford.  The other two, Copper Canyon and this, are flawed.  Many of the women who worked with him, including Ava Gardner, seemed to despise him.  Howard Keel was not really a terrific actor, especially when he wasn’t singing, but he’s not bad here.  Ava Gardner made few westerns (just this and Lone Star the previous year); her part here seems underwritten.  It’s pretty well known that director Farrow (married to Maureen O’Sullivan, with whom he had seven children, including actress Mia Farrow) and Gardner were having an affair during filming.

We know that Robert Taylor could be very good in the right circumstances (see Ambush and Westward the Women from about the same time, for example).  But here he seems stiff and heavily made up, and his part as the conflicted Rio is not well written.  Still, he manages to be interesting.  Anthony Quinn could be an excellent actor (Man From Del Rio, The Ride Back, Warlock), but here he chews the scenery as an over-the-top stereotyped Mexican bandit chieftain.  Jack Elam is effective in one of his meatier (if brief) roles as Esquedo’s right-hand man after Rio leaves.  Geronimo’s Apache-Mexican grandson Charles Stevens is one of Esquedo’s banditos. 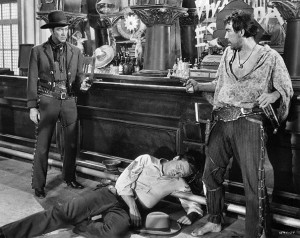 A considerable part of the weakness here is in the writing by Frank Fenton, who could do better (Station West, River of No Return, Escape from Fort Bravo, Garden of Evil).  Still, it’s watchable as the enigmatic Rio works out where his loyalties will lie.  For another character named Rio in a much worse western, see Jane Russell as Billy the Kid’s romantic interest in The Outlaw (1943).

Shot in color by the estimable Robert Surtees near Kanab, in southern Utah, at 90 minutes.  Music is by Bronislau Kaper. 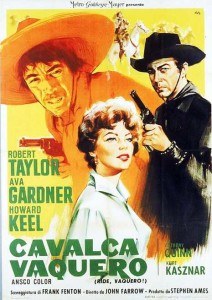 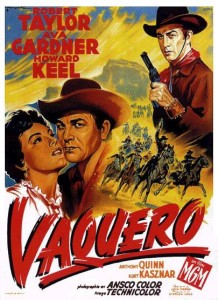 Like most other movies featuring a strong relationship of any kind between two men (Warlock, Butch Cassidy and the Sundance Kid and many others), comments have been made about a supposed homosexual subtext.  If it’s there at all (and it’s doubtful), there’s certainly nothing overt.  It becomes a lot campier if you start thinking about it in Freudian terms.