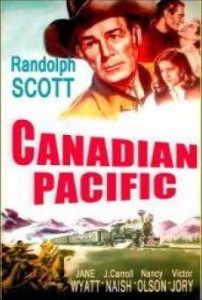 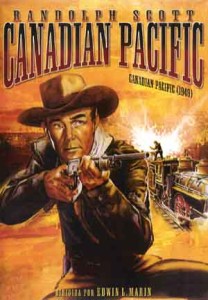 Randolph Scott seemed to have bad luck in romantic triangles in western movies.  In the earlier stages of his career, in Virginia City, Western Union and Jesse James, he was an ethical guy with a shady past or even a good guy in an insipid role, doomed to lose the girl to Errol Flynn, Robert Young and Tyrone Power.  Later in his career, plots of his movies sometimes found him interested in two women, one of whom insists that he give up his guns (Angela Lansbury in A Lawless Street, Jacqueline White in Return of the Bad Men and Jane Wyatt in Canadian Pacific).  In two of those movies he actually ends up with the woman who wants him to change, but in this case Jane Wyatt loses out.

Tom Andrews (Randolph Scott) is a surveyor and troubleshooter for the Canadian Pacific Railway, now trying to find a path over the Rocky Mountains.  The railroad is meeting resistance from the local metis (a group of mixed French-Canadian and Indian ancestry) led by fur trader Dirk Rourke (Victor Jory).  The animosity between Rourke and Andrews is complicated by the fact that they both fancy the same girl—Cecille Gautier (Nancy Olson, in her first significant screen role), daughter of a metis leader.  Andrews finds a pass for the railroad and is not scared off when Rourke takes a shot at him.  He is unsuccessful at dissuading a metis meeting from supporting Rourke, and returns to the railroad. 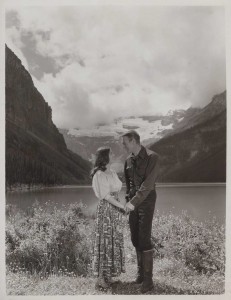 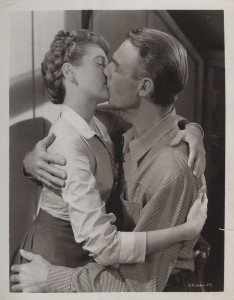 The railroad extension effort is led by Cornelius Van Horne (Robert Barrat), who persuades Andrews to come back to the railroad instead of marrying Cecille.  Andrews encounters railroad lady doctor Edith Cabot (Jane Wyatt), a beautiful and intelligent but priggish easterner with her own hospital railroad car who views him as a gun-wielding barbarian.  Nevertheless, she patches him up from the occasional bullet wound, and presides over his lengthy recovery when he is grievously injured by a dynamite blast triggered by a shot from Rourke.  Meanwhile, Rourke persuades the Blackfoot Indians to attack the railroad, and Cecille rides to warn Andrews. 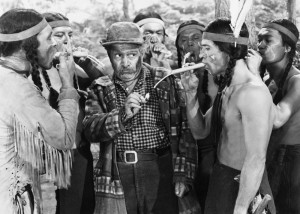 Dynamite Dawson (J. Carroll Naish) lives up to his name, smoking a little dynamite with the Blackfeet.

Just recovering after several months and having found an attraction to Dr. Cabot, Andrews leads the defense, while his friend Dynamite Dawson (J. Carroll Naish) rides for help.  During the battle, while Rourke and Andrews are shooting it out, Andrews sees Rourke killed by a convenient falling tree, but not before Rourke has successfully given the signal for the Indians to attack.  At the end, Dr. Cabot can’t forgive Andrews his return to violence, and he ends up with the (much younger) Cecille.  And the railroad goes through. 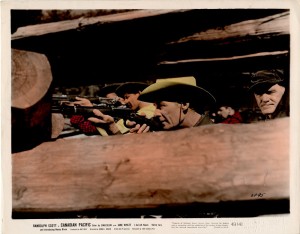 Andrews (Randolph Scott) and the railroad men desperately fight off a massive Indian attack from behind a makeshift barricade.

This was an attempt in a way to remake Cecil B. Demille’s Union Pacific story from ten years earlier.  However, the writing isn’t as good and the story doesn’t hang together convincingly.  It was filmed on location in the beautiful Canadian Rockies around Banff National Park.  It was shot in color, but the print hasn’t aged well. 95 minutes long. 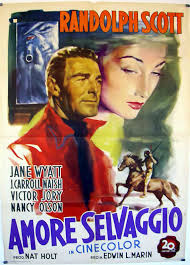 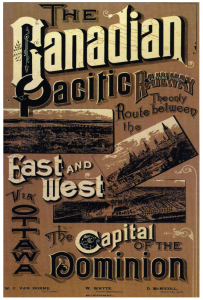 For Randolph Scott enthusiasts, note that this is one of the few instances when he wears (and uses) two guns.  He was more persuasive with one.  And this is one of the earliest appearances of Scott’s famous leather jacket, which would show up periodically in progressively more worn condition for the rest of his career (Hangman’s Knot, Ride the High Country, etc.).  Director Edwin L. Marin was at the helm for several of Scott’s westerns in this era (Abillene Town, Fighting Man of the Plains, The Cariboo Trail, Fort Worth), but his work is generally unremarkable.  For another adventure involving Randolph Scott north of the border, this time with a herd of cattle, see The Cariboo Trail the next year (1950).

This was Nancy Olson’s first significant screen role, and the usually-blond Olson doesn’t seem very persuasive as a dark-haired metis girl.  At 21, she was thirty years younger than Scott.  Next, she went on to one of her biggest screen roles, as screenwriter William Holden’s girlfriend in Billy Wilder’s Sunset Boulevard (1950), for which she received a Best Supporting Actress Oscar nomination.  Other than that, she may be most familiar now for her wholesome work as the frequent girlfriend/wife in Disney comedies of the early 1960s, like The Absent-Minded Professor (1961) and Son of Flubber (1963).