Shooting Stars:  A Ranking of the 29 Greatest Western Actors Since 1939
Part 3—Eleven Through Fifteen 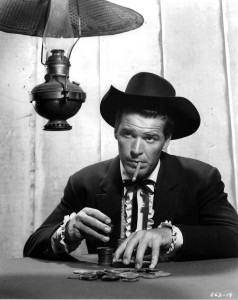 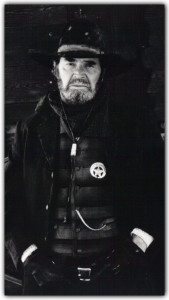 Oklahoma native James Garner is best known for his roles as an amiable western con-man, first demonstrated in the Maverick television series of the late 1950s.  He was better at that kind of role than anybody else (see Support Your Local Sheriff, Skin Game and Support Your Local Gunfighter).  He successfully played variants of that role in movies set in more modern times, including a couple of good ones set in World War II (The Great Escape [1963] and The Americanization of Emily [1964]) and a number of 1960s romantic comedies (Boys’ Night Out with Kim Novak, Cash McCall with Natalie Wood, The Thrill of It All and Move Over, Darling, both with Doris Day).  But that wasn’t the limit of his talents.  He could also do well at a kind of grim, humorless role, as he showed in Duel at Diablo (1966) and while playing Wyatt Earp in John Sturges’ Hour of the Gun (1967).  It was his misfortune that mainstream westerns were starting to decline in popularity when he was at his peak, and by the mid-1970s he was showing up in light, Disney-produced westerns with Vera Miles that haven’t been much seen (The Castaway Cowboy, One Little Indian).  More successful was his venture back into television as private detective Jim Rockford in The Rockford Files (for six seasons, starting in 1974).

In the later stages of his career, he was very good in a modern romantic western with Sally Field in Murphy’s Romance (1985), for which he was nominated for an Academy Award and a Golden Globe.  He showed up in two more westerns, once again as an aging Wyatt Earp in Hollywood of the late 1920s in Sunset (1988), and in the Mel Gibson Maverick remake (1994).  He returned to television with a short-lived series reprising his original Maverick character in Bret Maverick (1981) and with a credible turn playing an aging Capt. Woodrow Call in the television miniseries The Streets of Laredo (1995), based on a sequel to Larry McMurtry’s Lonesome Dove.  (One story has it that he had been offered the role of either Woodrow Call or Gus McCrae–his choice–in the original Lonesome Dove miniseries but was sidelined by health problems.  Lonesome Dove, of course, went on to become a classic with Tommy Lee Jones and Robert Duvall in those roles.)  An interesting sidelight of his late career was to see him together with fellow westerns star Clint Eastwood as aging astronauts in Space Cowboys (2000).

Like Paul Newman and Steve McQueen, Garner was long interested in automobile racing.  He was a good enough driver that he did his own driving stunts in The Rockford Files because he was better at it than any stuntman they could find.   In a 1973 interview, John Wayne called James Garner the best American actor.  Of all his films, The Americanization of Emily, with Julie Andrews (1964), was said to be Garner’s favorite—an excellent movie, wonderfully written and superbly acted but unfortunately not a western. 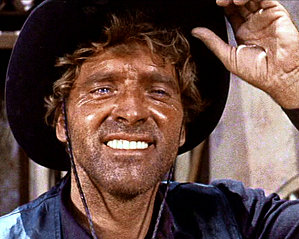 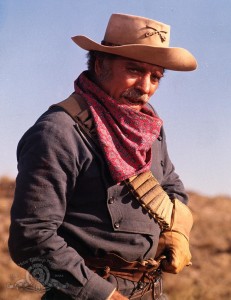 Burt Lancaster was one of the biggest movie stars of his time, from the late 1940s well into the 1970s.  Known especially for a vigorous brand of physical athleticism (he had once been a circus acrobat), an equally vigorous growth of hair and a large grin showing off a full set of very white teeth, he was willing to take any role that interested him.  He won an Academy Award as Best Actor for his performance in Elmer Gantry (1960).  For an early performance in a western, see him as the grinning unscrupulous quasi-outlaw Joe Erin in Vera Cruz (1954), playing with and against the more traditional and stolid Gary Cooper.  One of many to play Wyatt Earp, he did a credible version in John Sturges’ Gunfight at the OK Corral (1957), and he could also play a certain kind of comedy convincingly (The Hallelujah Trail [1965], The Scalphunters [1968]).  He was not afraid of taking a role secondary to lesser star Lee Marvin in The Professionals (1966), and his strong performance alongside Marvin made for an excellent western.

By the 1970s, as westerns faded in popularity as a cinematic genre, Lancaster was doing some of his strongest work in westerns as old scout Bob Valdez in Valdez Is Coming (1971) and as old scout Archie McIntosh in Ulzana’s Raid (1972), probably the last really good cavalry movie.  He’s even good as the central figure in the revisionist Lawman (1971) with Robert Ryan, which otherwise has some problems with its writing and direction. 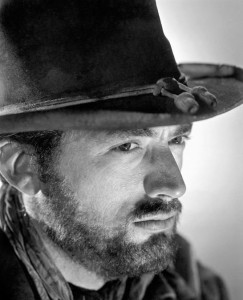 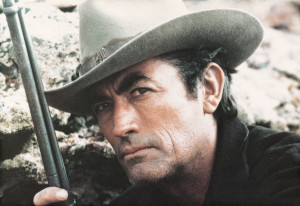 13.  Gregory Peck [Yellow Sky, Duel in the Sun, The Gunfighter, Only the Valiant, The Big Country, The Bravados, How the West Was Won, The Stalking Moon, Mackenna’s Gold, Shoot Out, Billy Two Hats, The Old Gringo]

Gregory Peck shared Joel McCrea’s ability to project a basic American style of decency, although his brand of that quality was a little flintier and less self-effacing than McCrea’s.  His ultimate cinematic expression of that quality is probably as southern lawyer Atticus Finch in To Kill a Mockingbird (1962).  It made him convincing in playing reforming outlaws (Yellow Sky [1948], The Gunfighter [1950]), but less so in portraying bad guys (Duel in the Sun, 1947).  He was a big star, both comfortable and convincing at the center of a large-budget production (The Big Country [1958]).

He didn’t make many westerns in the 1960s, part of his period of greatest stardom—only appearing in How the West Was Won (1962), as one among many stars.  Toward the end of the decade he appeared in a fairly good western thriller (The Stalking Moon [1968]), but like others he didn’t fare well as the genre, and his career generally, moved into a twilight period.  He showed up in such turkeys as Mackenna’s Gold (1969) and Billy Two Hats (1974).  Shoot Out (1971), which is watchable but not remarkable, is probably his best western from this period.  In his last western, he starred as crusty writer Ambrose Bierce, the titular character in The Old Gringo, during the period of Mexican revolutions in the 1910s, with Jane Fonda (1989).  He is justly praised for The Gunfighter and The Big Country; Yellow Sky and The Bravados are probably the most underrated of the westerns in which Peck appeared. 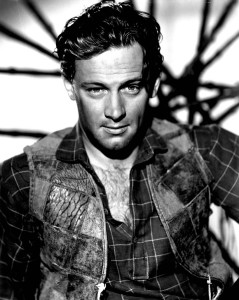 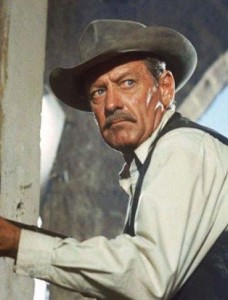 14.  William Holden [Arizona, Texas, The Man From Colorado, Rachel and the Stranger, Streets of Laredo, Escape from Fort Bravo, The Horse Soldiers, Alvarez Kelly, The Wild Bunch, The Wild Rovers, The Revengers]

Like Burt Lancaster and Gregory Peck, William Holden is not remembered first for his westerns.  He is remembered first for his roles as the young writer found floating face down in a swimming pool in Billy Wilder’s Sunset Boulevard, and for Wilder’s World War II drama Stalag 17, for which he won his Best Actor Oscar.  But his slightly acid modern-seeming persona translated well enough to westerns if the material and directing were right.  He starred in them from his earliest days in the movies, beginning before World War II with Arizona, with Jean Arthur and Edgar Buchanan (1940), and Texas, with Glenn Ford and Edgar Buchanan (1941).  After service in the war, he resumed his film career generally, and westerns specifically, with such good films as The Man from Colorado, again with Glenn Ford (1948) and with the colonial western Rachel and the Stranger, with Loretta Young and Robert Mitchum (1948).

Even with his success and elevation to stardom with Sunset Boulevard and Stalag 17, he made the occasional good western during the 1950s, working with director John Sturges in the underrated Escape from Fort Bravo (1953) and with John Ford in the Civil War cavalry story The Horse Soldiers, playing an army doctor continually feuding with John Wayne (1959).  Even as Holden’s alcoholism took its toll on him, Holden’s work in the 1960s included the good Civil War story Alvarez Kelly, with Richard Widmark (1966), and the western for which he is best remembered now:  Sam Peckinpah’s landmark The Wild Bunch (1969), in which Holden very effectively plays Pike Bishop, leader of an aging outlaw gang trying to pull off a last job amid the Mexican revolutions of the 1910s.  His career in westerns ended on an ignominious note with The Wild Rovers (1971), although the seldom-seen The Revengers (1972) is slightly better. 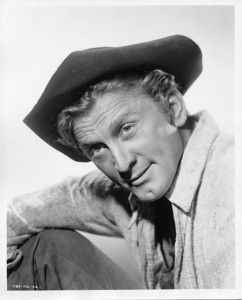 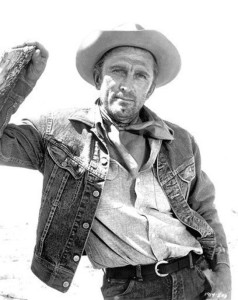 15.  Kirk Douglas [Along the Great Divide, The Big Sky, Man Without a Star, Last Train from Gun Hill, The Indian Fighter, Gunfight at the OK Corral, Lonely Are the Brave, The Last Sunset, The Way West, The War Wagon, There Was a Crooked Man, Posse, The Man from Snowy River]

One of the biggest stars of his time (the prime of which was the late 1940s into the early 1970s), Kirk Douglas appeared in a surprising number of westerns. But many of them weren’t all that good, and in some of them his persona seemed to be fighting with the traditional western ways of looking at things.  Like Burt Lancaster, he liked to not wear a hat, or to wear it only pushed back on his head.  He experimented with especially tight and unlikely wardrobes (The Last Sunset, The War Wagon) which emphasized his robust physique and athleticism.  He played a gunfighter who improbably only used a derringer (The Last Sunset).  He didn’t really need the theatrical gimmicks, though.  If you look only at his best work in westerns, you find one of the best mountain man movies (The Big Sky), his athleticism and physical strength (not to mention real acting ability) used to good effect without gimmicky costuming in Last Train from Gun Hill, the bitter edges of his personality being used effectively as Doc Holliday in Gunfight at the OK Corral, and as an isolated loner in the modern west in Lonely Are the Brave.

His ego was extraordinarily large (not unusual in Hollywood), but he managed to team well with Burt Lancaster (Gunfight at the OK Corral) and John Wayne (The War Wagon) when those two were in the dominant roles.  As the 1970s came in, he starred in less effective revisionist westerns (There Was a Crooked Man, Posse), which would probably not have been made without him.  In his last western, he chewed the scenery in dual roles in The Man from Snowy River.