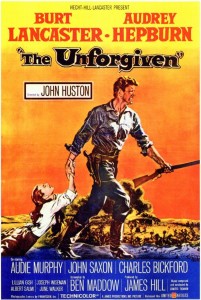 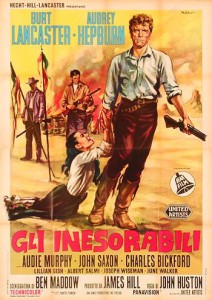 Audrey Hepburn was an elegant and accomplished actress, but seemingly not a natural in westerns—more a creature of the modern world, with a very slight and vaguely European accent.   This was her only western, and she has kind of a peripheral role, although a controversy about her is the central conflict of the movie.  In fact, she is not well cast here for what her character is supposed to be.  In addition to Hepburn, there is a lot of top talent involved here:  director John Huston, writer Alan LeMay (known for The Searchers), big star Burt Lancaster, and western star Audie Murphy.

The movie opens with an interesting shot of cattle grazing on the sod roof of the Zacharys’ ranch house in the Texas panhandle in the years immediately after the Civil War.  The family patriarch, Will Zachary, had been killed by Kiowas several years previously, and because of the long conflict with the Kiowas many whites, including middle brother Cash Zachary (Audie Murphy), hate Indians.  The Zacharys are partners of a sort in a ranching venture with the Rawlins family headed by Zeb Rawlins (crusty Charles Bickford), left crippled by Kiowa torture some years previously.

The head of the Zachary family now is oldest brother Ben Zachary (Burt Lancaster), first seen returning from Wichita with newly-hired hands to make the long drive back to Wichita with the combined Zachary-Rawlins herd.  The proceeds should make both families financially secure for the first time.  Brother Cash Zachary is good with a gun but hot-headed; youngest brother Andy Zachary is just inexperienced; and sister Rachel Zachary (Audrey Hepburn in dark makeup) is a foundling adopted by the family a couple of decades earlier.

Early in the movie, Rachel encounters a mysterious older figure dressed what appear to be parts of a Confederate uniform, carrying a saber.  He is Abe Kelsey (Joseph Wiseman), who makes cryptic quasi-Biblical pronouncements and may be crazy.  Ma Zachary (Lilian Gish in her second Texas matriarch role, after Duel in the Sun more than ten years earlier) clearly feels threatened by him.  Ben and Cash give chase, and, although they do not catch Kelsey, they kill his horse.

Abe Kelsey (Joseph Wiseman), who may be crazy, stirs up old wounds.

Meanwhile, young Charlie Rawlins (Albert Salmi, who tended to play thugs or clods—here he’s a clod) is interested in Rachel, although Ben doesn’t seem very enthusiastic about Charlie’s romantic attentions to his (non-genetic) sister.  Kiowas show up, claiming that Abe Kelsey has told them that Rachel is an abducted Kiowa and sister to the Kiowa leader.  As Ben rejects the Kiowa overtures, they respond by killing Charlie Rawlins.  A clearly distraught Ma Rawlins reacts by claiming to believe the Kiowa story, and the Rawlinses threaten to pull out of their partnership with the Zacharys if the story is true.  A combined force of Zachary and Rawlins men hunts down Abe Kelsey when he steals Rachel’s horse.  Under interrogation at the Rawlins ranch, he says that when his own son was captured by the Kiowas years before, he had wanted to trade young Rachel for his son and the Zacharys had refused.  As Kelsey sits on a horse with a noose around his neck, Ma Zachary kicks his horse and he hangs.

[Spoilers follow.]  Back at the Zachary ranch, Ma Zachary admits that when Will Zachary returned from a settler raid on a Kiowa village a couple of decades earlier, the only survivor was an infant girl, who was then adopted by the Zacharys in the place of their recently–deceased baby girl.  That was Rachel.  Cash is having none of it and leaves in a rage.  The Zacharys find themselves besieged by Kiowas and hold out for a day under the leadership of Ben.  Ma is shot and dies because she doesn’t tell anybody about her wound.  The next day, the Kiowas drive the Zachary cattle onto the top of their house, causing the roof to collapse.  Cash returns with ammunition just in time and kills several Kiowas but is wounded a couple of times himself.  Rachel, with only a few rounds in a pistol, is confronted by her Kiowa brother and has to choose between the only family she has known or her Indian heritage.  She shoots the Kiowa brother.  At the end, with their ranch in ruins, the latent romance between Ben and Rachel comes out, and they decide to get married.

This is a typical sort of John Huston movie, with dark secrets from the past influencing or controlling the present.   Burt Lancaster is a strong lead, seldom wearing a hat during the entire movie so his vigorous growth of hair is always on display.  Audie Murphy is perfectly adequate in one of his few A westerns (along with Night Passage).  Lilian Gish is good at being a frontier matriarch haunted by the dark past.  Audrey Hepburn doesn’t look much like an Indian despite her dark makeup, and she has an unusually refined persona for any kind of frontier woman. 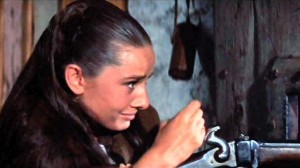 Preparing to receive the Kiowas: Rachel (Audrey Hepburn, in her dark makeup) with her frontier skills.

Huston saw this as a story about racial relations and bigotry; the studio wanted to make sure that it was primarily commercial, and the two concepts do not always make for a comfortable mix.  Some of the dialogue and references to Indians (they are continually referred to as “red-hide Indians” and worse) seems a bit virulent for modern tastes.  It has some themes in common with John Ford’s The Searchers, although in this case it’s an Indian child abducted by whites and not the other way around. Big budget or not, this is watchable but seems somewhat overheated. Music is by Dimitri Tiomkin and cinematography by Franz Planer.  Filmed in color in Durango, Mexico, at 125 minutes. Not to be confused with Clint Eastwood’s 1992 masterpiece Unforgiven.

Lancaster’s production company was behind the film, and he initially saw Kirk Douglas in the role of his brother Cash.  That idea was shot down because it was thought that Douglas would alter the balances between the brothers as written in the story.  When it was decided not to use Douglas, Tony Curtis and then Richard Burton were considered for the role before Audie Murphy was ultimately chosen.  Bette Davis turned down the Lilian Gish role because she didn’t want to play Burt Lancaster’s mother. 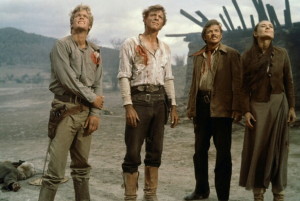 Before filming began, director Huston and Lancaster took Lillian Gish out to the desert to teach her how to shoot, which she would have to do in the film.  However, Huston was surprised to discover that Gish could shoot faster and more accurately than either he or Lancaster, who both thought themselves expert marksmen.  It turned out that early in her career during the silent movie era, Gish was taught how to shoot by Oklahoma outlaw Al Jennings, who had become an actor after his release from a long prison sentence for train robbery and was cast in one of her films.  She found that she liked shooting and over the years had developed into an expert shot.

Audrey Hepburn was seriously injured during production when she was thrown by a horse between scenes.  Hepburn, who was pregnant, spent six weeks in the hospital healing from a broken back and, when she returned to the set, was able to complete her role wearing a back brace, which her wardrobe had to be redesigned to hide.  Sadly, she suffered a miscarriage a few months later, which some blamed on her injury from this movie.  Indeed, John Huston blamed himself for the mishap, although Hepburn harbored no ill feelings toward the director.  While Hepburn was in the hospital, Huston filmed scenes using a double.  Of course, it didn’t help Hepburn’s health that her weight fell to 98 pounds during filming, and that she increased her smoking to three packs a day. 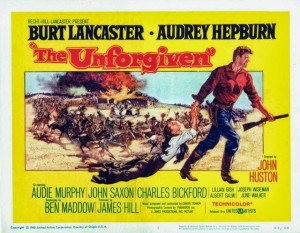 In his autobiography, John Huston describes this film as the only one he ever made that he entirely disliked.  Film critic David Thomson, not usually a Huston admirer, called it his best film.  It pretty clearly is not:  The Maltese Falcon, Key Largo, The Treasure of the Sierra Madre, The Asphalt Jungle, The African Queen and The Man Who Would Be King all have stronger claims to that honor.