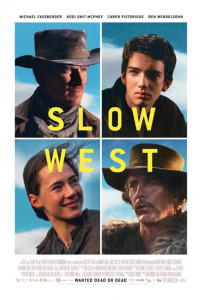 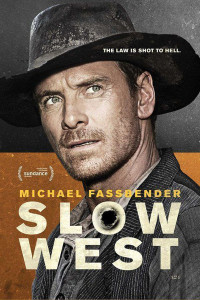 Life in 1870 in Colorado Territory was apparently “nasty, brutish and short,” as in the well-known quotation by Thomas Hobbes and as depicted in this low-budget current western with a high body count.  Young (16-year-old) Scotsman Jay Cavendish (Kodi Smit-McPhee) is out of his element, searching for his lost love Rose Ross (Caren Pistorius).  A narrator (Silas, as it turns out) describes him as “a jackrabbit in a den of wolves.”  The mood is set as the credits role over Jay riding through an Indian burial site.  We are shown in a series of flashbacks how Jay’s uncle was accidentally killed in an altercation, causing Rose and her father (Rory McCann) to flee Scotland for the wilds of the New World.  The flashbacks also reveal that Rose, of a lower social caste, does not think of Jay as a lover.  What Jay also does not know is that a bounty of $2000 (very high for the time) has been posted on the Rosses, causing legions of distasteful bounty hunters to pursue them.

Silas:  “Kick over any rock, and most likely a desperado would crawl out and knife you in the heart if there was a dollar in it.” 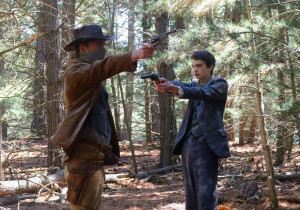 This is not as much a standoff between a masked Silas (Michael Fassbender) and a young Jay Cavendish as it would at first appear.

As Jay gets closer to the Silver Ghost Forest (a name more allegorical than real-sounding) somewhere in Colorado, he is confronted by three ex-soldiers hunting Indians for sport, until he is rescued by Silas Selleck (Michael Fassbender), one such bounty hunter.  Silas quickly and pitilessly dispatches the three, and Jay gives Silas his remaining money to get him safely to his destination.  They arrive at an isolated general store, and spot another bounty hunter, dressed as a minister and carrying an elaborate rifle.  While they are at the store, a desperate Swedish couple arrives and tries a hold-up.  The storekeeper kills the husband, and, as the wife holds a gun on Silas, Jay shoots her.  As they flee the scene, they see two blond children waiting outside the store.

Sickened by it all, Jay sneaks away from Silas and falls in with Werner (Andrew Robertt), a man in a yellow wagon who appears to be a 19-century anthropologist “recounting the decline of the aboriginal tribes in the hope of preventing their extinction by their conversion to Christianity.”  As Werner notes, “In a short time, this will be a long time ago,” showing a keen (and perhaps anachronistic) awareness of the transitory nature of the Old West.  When Jay awakens the next morning, he discovers that Werner has departed in the night with his horse, clothes and possessions.  He stumbles across the prairie until Silas finds him and gives him back his horse and clothes.  Silas denies having killed Werner for it. 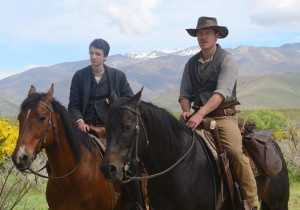 As they camp one evening, they are accosted by Payne (Ben Mendelsohn), who presides over a band of scurrilous bounty hunters and with whom Silas once rode.  Payne plies them with absinthe, and Jay stumbles into Payne’s camp, noting that they appear to have the two blond children with them now.  When Jay and Silas awaken the next morning in a downpour, they have lost their guns and most of their meager possessions.  But they make it to the Silver Ghost Forest, and see the Ross cabin in the distance.  Silas ties Jay to a tree to keep him from dashing into the situation.

[Spoilers follow.]  We see that the reverend/bounty hunter has arrived first, and he picks off John Ross.  He is in turn blasted by Payne’s men, who lay siege to Rose and an Indian within the house.  As Silas tries to help them without a gun, he is shot twice and rendered helpless.  Silas, Rose and the Indian have reduced the number of Payne’s band, however.  Jay finally gets loose and makes his way to the cabin, only to be shot by a shaking Rose as he enters.  Payne finally enters as well and appears to have them at his mercy, but Rose slips a dying Jay her pistol and uses her body as a shield to give him the chance to shoot Payne. 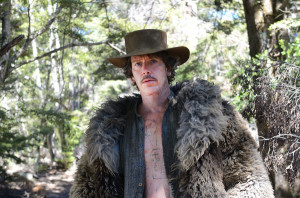 Payne (Ben Mendelsohn), leader of a pack of ruthless bounty hunters, in his impressive fur coat.

As the movie comes to an end, we see Rose, Silas and the two blond children, apparently living as a happy family.  It pans back over Silas’ killings that we saw earlier.  Maybe all the bounty hunters are dead; if not, we have no idea why they are able to live so peacefully now.

The title is curious but not inaccurate.  This was written and directed by first-time Scottish director John Maclean, with a bit of a European sensibility.  Sometimes the dialogue does not seem entirely authentic, as with Silas’ repeated “Let’s drift” when he’s ready to get going.  Jay crosses the U.S. (or at least the western part of it) on horseback without a hat, which seems unlikely.  The film does not always explain what’s going on, resulting occasionally in a slightly surreal feel, reminding us of, for example, Jim Jarmusch’s Dead Man—another tale of a stranger in a strange western land.  Still, it is skillfully executed in its way and worth watching.  Most viewers will find it more accessible than Dead Man.  The siege at the cabin is well-filmed; it could easily have been very confusing with so many characters involved, but we can follow it well enough. 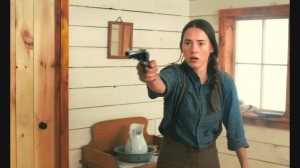 If the scenery does not always look completely like Colorado, that’s because this was shot mostly in New Zealand.  It premiered at the Sundance Film Festival in January 2015, and was released in May.  The twangy music by Jed Kurzel is very good.  Excellent cinematography is by Robbie Ryan.  In color, at 84 minutes; rated R for the violence.

Irish actor Michael Fassbender is by far the best-known cast member, but all four of the main performers are excellent–Fassbender, young Kodi Smit-McPhee, Caren Pistorius and Ben Mendelsohn.  For South African/New Zealander Pistorius, in particular, it may prove to be a breakthrough role, although she isn’t actually on screen much until the end.  (Her name appears to be misspelled on one of the film’s posters.)  Fassbender had a production role as well, which is why the film got made.  If you have the opportunity, watch it twice; it will flow better the second time. 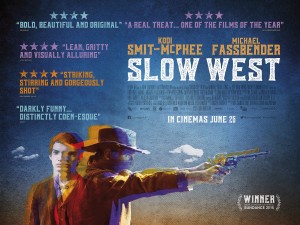 Poster for the UK release of Slow West, scheduled for late June 2015.

Rodrigo Perez in The Playlist was one of the more enthusiastic reviewers:  “Brilliantly executed, Maclean’s movie is certainly an unconventional Western with a European and outsider’s perspective.  While it has its share of traditionally moody and atmospheric elements, Slow West is perhaps best defined by its sharp wit, absurdist violence and fairy tale qualities.  Evincing a magic realism of fable dreaminess, juxtaposed with harsh severity, Maclean is right at home with this tone.

“Slow-burning and simmering, Slow West knows how to kick the voltage into high gear.  As the movie gallops to its inevitable epic conclusion, the narrative is like three wicks lit and racing to a thrilling and explosive ending with a high body count, but with heart and soul, too.  A dark but spirited fable about the pitilessness of the West, the meaning of home on the range and the worthwhile qualities of wicked, seemingly irredeemable men, Slow West is a terrific little parable, and a strong debut by John Maclean worth treasuring.”