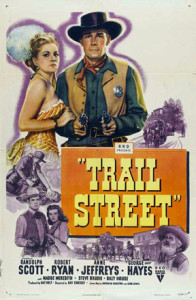 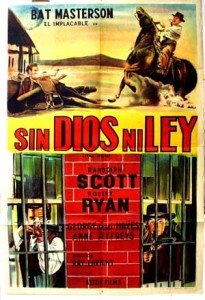 The Trail Street of the title is the main street of Liberal, Kansas, a reference to the route of the cattle drives from Texas.  Here, the trail-driving cattlemen are the bad guys, pitted against the good but defenseless farmers.

On  the side the farmers is sympathetic local banker (!) Alan Harper (Robert Ryan), who is running out of money to finance them and who is romantically interested in Susan Pritchard (Madge Meredith).  Susan, who wants to movie to the big city, can’t decide between the obviously decent Harper and Logan Maury (Steve Brodie), saloon owner on the side of the cattlemen, who is trying to buy up the farmers’ land as they leave one by one.  Maury is wealthy and offers to take Susan to Chicago.  Saloon girl Ruby (Anne Jeffreys) grew up with Harper but ran away to her present life and sees Maury as hers. 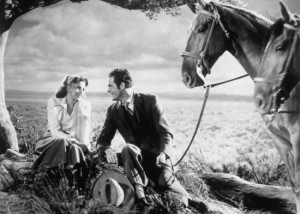 Amid the gathering chaos, local character Billy Burns (Gabby Hayes) persuades the mayor to send for Bat Masterson (Randolph Scott).  Masterson quickly sizes up the situation and sides with Harper against Maury and the sleazy saloon operator Carmody (Billy House is excellent in the duplicitous role).  While Susan dithers, Harper is framed for the murder of a farmer he was trying to help, and he discovers the farmer had a new type of winter wheat that will make the Kansas prairies fertile fields for wheat production.  As Maury tries to bust the actual murderer out of jail, a battle breaks out, with the departing farmers pitching in against the cowboys and Maury.  Ruby burns the deeds of the farmers that Maury had acquired, and he shoots her in the back, causing his own men to turn on him.  Susan (not terribly convincingly) comes to her senses about Alan.  Bat Masterson leaves for New York to become a “journalist.”  (The real Bat Masterson became sports editor for the Morning Telegraph in New York.) 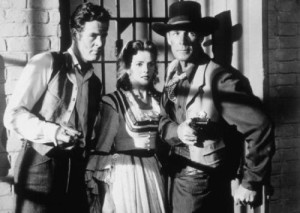 This was made about the time that Randolph Scott was turning his career to making only westerns, and this was not his best work.  At this stage he sometimes adopted a relentlessly cheerful demeanor, notwithstanding what was going on around him, and the result was (a) a kind of dissonance, and (b) a sense that, whatever the problems, they weren’t all that serious, even if slaughter and mayhem were taking place.  Scott would be better in future westerns, especially those made a decade later with Budd Boetticher.  Another weakness, common in Randolph Scott westerns, is an insipid female lead, both in the writing and in performance.  Bad girl Anne Jeffreys is much more interesting than indecisive good girl Madge Meredith.  And a third problem is that Gabby Hayes’ brand of toothless, aw-shucks performance must have been much more attractive 70 years ago than it seems now.  As toothless sidekicks go, Walter Brennan was a much better actor.  Steve Brodie’s bad guy Logan Maury suffers from an inconsistent mustache, among other things.

In black and white, at 84 minutes.  Randolph Scott (Frontier Marshal, Trail Street) joins Joel McCrea (Wichita, The Gunfight at Dodge City) as actors who have portrayed both Wyatt Earp and Bat Masterson on film.  Some posters for the movie show Scott using two guns (as he did in Canadian Pacific), but he wears only one in the film.  He was better with one.  The German title was much more fun:  Die Totesreiter von Kansas (Death Rider of Kansas). 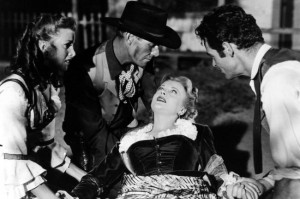 Randolph Scott, Gabby Hayes and Steve Brodie had starred the previous year in Badman’s Territory.  Four of these actors, Scott, Ryan, Jeffreys and Hayes would appear together the next year in director Enright’s slightly better Return of the Bad Men.  This time Ryan would be a bad guy (the Sundance Kid), Gabby Hayes would be a wildly improbable bank president and Anne Jeffreys still wouldn’t get the guy despite being more interesting than the ostensible female lead.  Ray Enright, who had directed movies since the 1920s including the 1942 version of The Spoilers with Randolph Scott and emerging star John Wayne, directed several of Scott’s westerns of the late 1940s (Albuquerque, Coroner Creek), as well as Errol Flynn and Alexis Smith in Montana (1950).