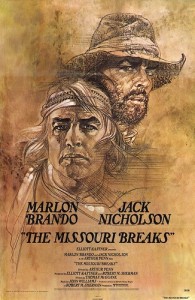 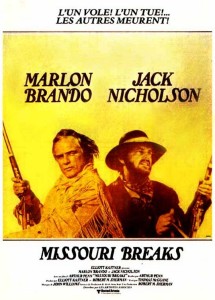 The title refers to an area of rough terrain along the Missouri River in north central Montana, where a variety of rustlers, wolfers, outlaws and other undesirables found refuge during the ranching era of the 1880s.  Marlon Brando was generally thought to be the greatest film actor of his generation (roughly 1950 to 1972), and Jack Nicholson was the personification of the new American cinema of the1970s.  Here they star together for the only time, under the direction of Arthur Penn, who had helped usher in the new era with Bonnie and Clyde (1967).  It was the 52-year-old Brando’s first film since the back-to-back successes of The Godfather (with a Best Actor Oscar) and Last Tango in Paris three years earlier; and Jack Nicholson had just won the Best Actor Oscar for One Flew Over the Cuckoo’s Nest (1975).  It made for a highly-anticipated movie.

Range baron David Braxton (John McLiam) is frustrated by mounting stock losses to rustlers, now up to 7% (a number repeated more than once).  As the movie opens, Braxton and his men are hanging a young rustler, to the distress of Braxton’s independent-minded daughter Jane (Kathleen Lloyd).  In response to that hanging, the rustlers hang Braxton’s foreman Pete.  So Braxton sends for a range “regulator”—Robert E. Lee Clayton (Marlon Brando) from Wyoming. 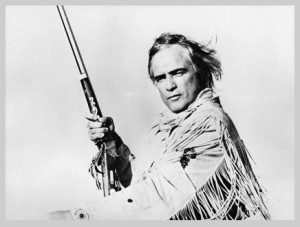 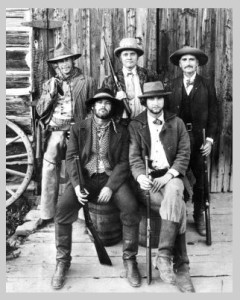 Marlon Brando as Lee Clayton, as he first appears in The Missouri Breaks; and Tom Logan (Jack Nicholson) surrounded by the others in his gang,

About the same time, Tom Logan (Jack Nicholson) and Little Tod (Randy Quaid) rob a train in a quasi-comic sequence.  Tom, the leader of a gang of outlaws that include rustling among their pursuits, seeks out Braxton for his advice on starting a ranching operation, which he does using the proceeds of the train robbery.  The rest of his gang, led by Cal (Harry Dean Stanton), take off north to steal 60 horses from the Canadian Mounties.

Tom finds that he likes farming/ranching, and may be good at it.  Jane Braxton conceives a sudden fondness for him, and they work out the terms of a dalliance.  As Jane watches from the Braxton porch, two apparently riderless horses approach over the hill.  As the horses arrive, Lee Clayton’s head pops out from under the lead horse’s neck.  The regulator has arrived, wearing a beautiful white leather jacket and a headband and sporting an inexplicable Irish accent.  He meets various Braxton neighbors, including Tom Logan.

Tom Logan (Jack Nicholson):  “Regulator?  Ain’t that like a dry gulcher?”
Lee Clayton (Marlon Brando):  “Well, that’s not the softest term you could use, I’d say.”
Tom Logan:  “Well, Regulator, correct me now if I’m wrong.  Isn’t a regulator one of these boys that shoots people and don’t never get near ’em?”
Lee Clayton:  “That’s it.” 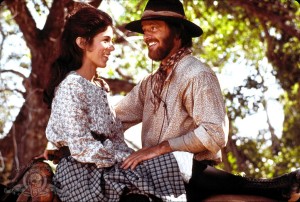 Jane Braxton (Kathleen Lloyd) and Tom Logan (Jack Nicholson) get to know each other better.

[Spoilers follow.]  As the rest of Logan’s boys return from Canada with their stolen horses, they are ambushed on the American side of the border by the Mounties, who take back their horses.  Clayton, now sans Irish accent and claiming to be Jim Ferguson, meets Little Tod and drowns him in the Missouri.  Braxton can’t control Clayton and tries to call him off, to no effect.  One by one he picks off the others in Logan’s gang, often leaving his trademarck 50-caliber rifle shell.  Finally, as Cal sleeps in the cabin, Clayton, dressed as a woman and referring to himself as Granny, firebombs it and captures Cal.  After talking with him, Clayton kills him with a strange tomahawk/throwing knife.  Tom knows that he will be next.  As Clayton hunts him, Clayton goes to sleep at his camp and awakens suddenly to find Logan next to him.

Tom Logan [to Clayton, whispering]:  “You know what woke you up?  You just had your throat cut.”

Logan then confronts Braxton, intending to kill him, only to find that Braxton, upon hearing Jane tell him she was leaving, is now reduced to helplessness (perhaps by a stroke)—until he grabs a pistol and shoots Logan.  Whereupon Logan shoots back, killing Braxton.  As the movie ends, Jane and Logan try to figure out if there’s a future for them together, perhaps in Montana’s Little Rockies in a few months. 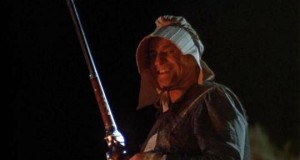 The movie was not well-received on its release, grossing only $14 million in the U.S.  Leonard Maltin called it “a jumbled, excessively violent pseudo-event; a great director’s worst film and one of the worst ‘big’ movies ever made.”  Brando’s flamboyantly over-the-top (and often unintelligible) performance was singled out.  Vincent Canby, in his New York Times review, wrote that Brando’s performance “had no apparent connection to the movie around him.”  “The American press is always running him [Brando] down,” director Penn told one interviewer, “but he’s a great actor and a true professional.”  In Penn’s view, The Missouri Breaks flopped not because of Brando, but because “The American public isn’t ready for a film that doesn’t have a big shootout at the end.”  No, it was pretty much Brando; the ending actually works.

In the last couple of decades, there have been some attempts at re-assessment.  Upon Arthur Penn’s death in 2010, critic David Kehr referred to The Missouri Breaks as “a surreal western with moments of brilliance but a meandering tone.”  The Harvard Film Archive at a recent showing provided this synopsis:  “Featuring the incredible pairing of Jack Nicholson as a feckless cattle thief and Marlon Brando as the Irish ‘regulator’ hired to hunt him down, The Missouri Breaks is a rollicking and highly unusual Western that, in typical Penn fashion, strains the boundaries of the genre.  Penn’s empowerment of performers is taken to a wonderful furthest extreme by the subversive presence of Brando’s cross-dressing and unpredictable assassin, who effectively turns codes of masculinity and narrative continuity upon their heads.  Once dismissed as an ‘oddity’ in Penn’s career, The Missouri Breaks has been reevaluated as one of the more ambitious and original Westerns of its time, placing it in the company of Peter Fonda’s The Hired Hand and Monte Hellman’s The Shooting.”  Such a neo-revisionist view of a revisionist western is not entirely convincing, however.  “Penn’s empowerment of performers” really meant that he couldn’t get Brando to accept direction and eventually gave up trying.  Brando’s scenery-chewing, constant ad-libbing of dialogue and unfathomable accents and costumes made Jack Nicholson look restrained by comparison; Nicholson does well in the film, although his presence always adds a note of subversion to a western.  It was said that, despite their multiple scenes together, Nicholson and Brando were only on the set at the same time for one day. 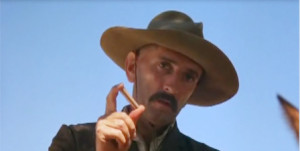 Among the supporting players, Harry Dean Stanton is the best, as Cal, the other senior member of Logan’s rustler/outlaw gang.  Kathleen Lloyd is also good as Jane Braxton, and it’s a bit surprising that she didn’t have more of a film career. This just wasn’t the movie to build such a career on.  This was the last leading role of Brando’s career, although he was only 52.  Producers became warier of him, his politics got in the way, he seemed less interested in acting generally, and he had started to put on substantial amounts of weight.  He could still be excellent when he wanted to, though; his future still included smaller roles such as a cameo as Superman’s father (1978), Apocalypse Now (1979), a brilliant comic riff on his Godfather role in The Freshman (1990), and the caper film The Score (2001), with Robert De Niro and Edward Norton.

Although this was released the same year as The Shootist and The Outlaw Josey Wales, this movie partakes much more of the revisionist western trends of the time than those films do.  Director Penn had established himself squarely in that stream with Little Big Man in 1970, and the anti-death penalty stance here was very much in line with the progressive times of the anti-authoritarian 1970s.  Jane Braxton’s feminist and sexual attitudes also seem more of the 1970s than the 1880s.  The outlaws are more humane than the authorities, such as they are, and are somewhat more charming than they would have been in real life, to make them more sympathetic. 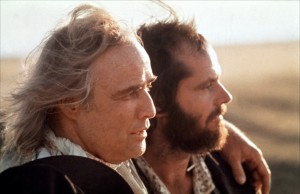 Co-stars Brando and Nicholson were together on the set for at least one day.

This has what is sometimes called a “literate” screenplay, meaning that the dialogue often sounds like characters in a book rather than real people talking.  It was written by novelist Thomas McGuane, known also for the films Rancho Deluxe and Tom Horn, with an uncredited rewrite by script doctor Robert Towne and extensive ad libbing by Brando.  It sports an early (and successful) film score by the prolific John Williams.  Filmed in color by Michael Butler at various locations in Montana (Red Lodge, Billings, Virginia City, Nevada City), at 126 minutes.  Rated R, for violence, hangings and sexual references.

Author McGuane obviously based the screenplay on some actual historical events and persons.  David Braxton reminds us of Montana founding father and rancher Granville Stuart, who built the DHS Ranch near the Judith River.  In 1884, he led a group of vigilantes known as Stuart’s Stranglers, who cleaned out rustlers in the area, killing up to twenty of them.  Stuart then lost his ranch after the Big Die-Up, the horrific winter of 1886-1887 that killed many of the cattle on the northern plains.  He was known for his fondness for books and his extensive personal library, and he spent his last years as the head librarian at the Butte Public Library.  Some aspects of Lee Clayton are based on Tom Horn, the most famous of the “range detectives,” including his marksmanship and penchant for killing at a long distance, and his leaving a trademark (in Horn’s case, usually a stone under the victim’s head).  Horn was eventually executed in Cheyenne in 1903 for a killing he may or may not have committed.  Tom Logan’s name seems to come from a famous family of Montana outlaws; Lee Clayton calls attention to that when he makes a reference to Lonnie Logan, a Montana outlaw of the 1890s who was one of the brothers of Harvey Logan–the Kid Curry of Butch Cassidy’s Wild Bunch. 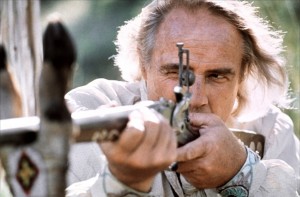 The film remains controversial forty years later, a colorful artifact of its time.  Even if it’s a failure, it’s a notable one, joining such epic bombs as Duel in the Sun and Heaven’s Gate.  Like Heaven’s Gate, it will continue to be subjected to re-examination from time to time now that the passions surrounding its making and release have faded.  Among the colorful details of the film are Lee Clayton’s exotic weapons, including an engraved pistol with the front sight filed down, his silver-chased Creedmoor long-distance rifle, and the strange throwing hatchet/knife (supposedly invented by Brando) with which he kills Cal.  The film was put on the American Humane Association’s “unacceptable” list because of its treatment of horses: at least one was drowned in the Missouri River, another crippled by a tripwire (commonly used in movies at one time), and several others injured during a stampede sequence.