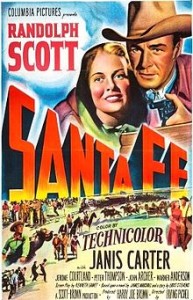 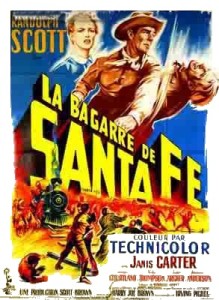 In the wake of the Civil War, southerners Brit Canfield (Randolph Scott) and his three brothers have lost their plantation in Virginia and head west.  In northern Missouri, they encounter hostile Yankee soldiers and are forced to kill one.  In their escape (Scott leaves behind his beautiful horse Stardust, who disappears from the movie), they hop on a passing train and end up in Kansas.  Brit goes to work for the Atchison, Topeka and Santa Fe Railroad, but his embittered brothers fall in with Cole Sanders (Roy Roberts), operator of a mobile saloon with a lot of other unlawful activities. 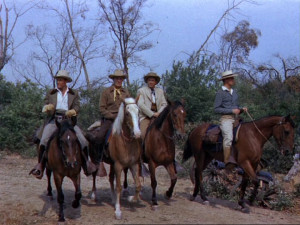 Brit quickly becomes the chief assistant and troubleshooter for Dave Baxter (Warner Anderson), a former Yankee officer who remembers Britt as a capable commander for the opposition during the late war.  Baxter’s clerk, payroll manager and telegraph operator Judith Chandler (Janis Carter) is initially hostile, having lost her husband in the Civil War action for which Baxter remembers him.  Sanders (and Canfield’s brothers) fire up Indian hostility to the railroad, until Britt lets the chief drive the iron horse.  Canfield is continually at war with Sanders, with his brothers caught in the middle.

With the railroad rushing to the Colorado state line to make a bonus, Sanders causes a drunkern surveyor to move the state line designation so that the bonus is imperiled until Brit and Baxter drive the construction through the night for the final 48 hours.  The Denver and Rio Grande threatens to take Raton Pass in eastern Colorado (effectively blocking the Atchison, Topeka) until Brit makes a marathon ride to buy the toll road in the pass from Uncle Dick Wooton first. 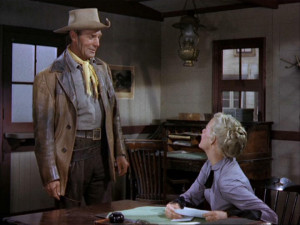 A mysterious gang robs the train carrying the payroll, and Britt recognizes a couple of his brothers.  One of them is wounded and dies of his wounds.  Bat Masterson from Dodge City arrests the youngest brother until Britt creates a reasonable doubt for him, with the help of Judith Chandler.  Baxter sets up a decoy train, but Sanders overhears Britt telling his brothers it’s a trap, and they rob the Wells Fargo safe instead.  While pursuing the robbers, Britt encounters Bat Masterson and Baxter and persuades them to let him join their posse.

At a remote station they trap Sanders and his gang; when the remaining two Canfield brothers balk at killing during the escape, Sanders and his men shoot them.  Sanders and his remaining henchman leap aboard a passing train with Britt in pursuit, and since he’s Randolph Scott, we know how that will turn out.  Baxter finds that Judith has hidden a wanted poster for the Canfields and no longer trusts Brit; although the railroad makes it to Santa Fe (despite the name of the railroad, the original line didn’t go to Santa Fe), but by that time Brit is working for a railroad in Nevada.  When Judith finds out where he is, she goes to join him.  Fade to black. 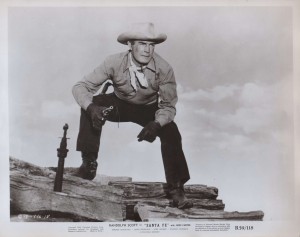 This is one of several movies with Randolph Scott as a railroad troubleshooter (see Canadian Pacific and Carson City, for example) in building a western railway.  The film has a lot of plot and good action, with Scott continually torn between getting the railroad through and trying unsuccessfully to get his brothers to go straight.  There are some loose ends in all of this; it’s not clear why Sanders would profit from sabotaging the railroad, for example.  You’d think he would do best with his mobile saloon if the railroad prospered.  This isn’t one of the better supporting casts for a Randolph Scott western; Janis Carter is a fairly colorless female lead, as was common in those films.  The film starts with misattributing a well-known phrase from Lincoln’s second inaugural address to the Gettysburg Address; and includes windy Manifest-Destiny pronouncements and speeches by C.K. Holliday (Paul Stanton playing the owner of the railroad) on more than one occasion.

On the whole, however, this is worth watching, with lots of good action–one of the better Randolph Scott westerns from the early 1950s.  It would make a good double feature with Carson City.  Shot in color in Arizona by Charles (Buddy) Lawton, Jr., at 87 minutes.  This was one of the last films from director Irving Pichel.  The producer was Harry Joe Brown, who frequently worked on Scott projects, most notably those directed by Budd Boetticher in the late 1950s.