One of the most common traditional themes of the western genre is having disputes and confrontations finally resolved in a shootout.  Typically the good guy (or the forces of righteousness, however they are represented) wins with a combination of skill with a gun (the most common), guile, personal courage and moral force against great odds on the other side.  Mostly it works; sometimes it doesn’t (see, for example, Colorado Territory [1949], with the fate of Joel McCrea and Virginia Mayo, The Gunfighter [1950] with Gregory Peck, Devil’s Doorway [1950] with Robert Taylor or Hombre [1967], with Paul Newman).

However, one of the ideas that became current in westerns beginning in the mid-1950s was that of the crippled gunman.  How far can courage, guile and moral force take you in situations involving violence and requiring unusual physical skill, when the physical part isn’t at full strength?  Even some of the greatest directors of westerns used this idea (Sam Peckinpah in The Deadly Companions; Budd Boetticher in Decision at Sundown and also in Seven Men From Now; Howard Hawks in El Dorado).

Usually, the impaired gunman goes on to demonstrate that “some things a man can’t ride around,” (see that line in Hondo, Seven Men From Now, The Tall T, Ride Lonesome and others), even if the fight isn’t fair any more—even if it appears hopeless.  This often gives a woman the opportunity to provide him with an out on the eve of his trial.  She tries to persuade him to go away with her instead of facing his adversaries, testing his moral worthiness and resolution.  (See Angela Lansbury in A Lawless Street, Katy Jurado in Man from Del Rio, Virginia Mayo in The Proud Ones, Dorothy Malone in Warlock, and many others).  Even Grace Kelly couldn’t make that work in High Noon. 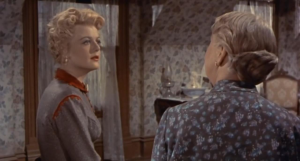 Randolph Scott’s boarding house landlady explains the basics of what a man’s gotta do to his estranged wife Angela Lansbury in A Lawless Street.

Ramrod (Joel McCrea, 1947).  The ramrod of the title is Dave Nash (Joel McCrea), good with a gun but badly wounded in the shoulder before his big showdown with cattle baron Frank Ivey.  Solution:  he takes a shotgun to the showdown.

Gunsmoke (Audie Murphy, 1953).  Gunman Reb Kittredge (Audie Murphy) wins a ranch on the turn of a card, but immediately has to get his cattle to a buyer.  After the bad guys smash up his gun hand and arm, he must also deal with his enemies.

The Far Country (James Stewart, 1954).  The protagonists in westerns directed by Anthony Mann frequently had psychological impairments.  In this one, James Stewart has a physical one as well; his gun arm’s in a sling as he approaches his final confrontation with John McIntire and his band of thugs (including Robert Wilke and Jack Elam). 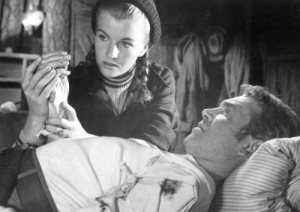 Corinne Calvet nurses the badly-wounded James Stewart back to health in The Far Country.

A Lawless Street (Randolph Scott, 1955).  Randolph Scott plays marshal Calem Ware, who goes up against his gunfighting nemesis (Michael Pate) with a smashed gun hand and a head injury.  HIs only advantage is that the bad guys think he’s already dead because of those wounds.  Director Joseph H. Lewis seemed to like to play with the idea of an impaired gunman (this and Terror in a Texas Town).

The Lonesome Trail (John Agar, 1955).  Cowboy and Civil War veteran Johnny Rush (John Agar) returns to find his father dead, his land gone and his girl engaged to the local land baron.  He loses the use of his gun arm in a fight with the henchman of the land baron, so he takes up the bow and arrow instead of the usual tools of violence. 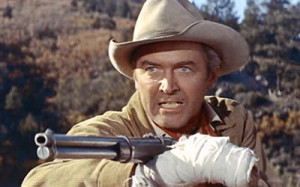 Having had his gun hand shot by bad guys, James Stewart is forced to use a rifle in The Man From Laramie.

The Man From Laramie (James Stewart, 1955).  Will Lockhart (James Stewart) has been shot in the right hand point-blank, but he doesn’t let that stop him in his quest to hunt down whoever killed his brother and is responsible for selling guns to the Indians.  It does mean he has to use a rifle instead of a pistol, however.

Man From Del Rio (Anthony Quinn, 1956).  Anthony Quinn’s Dave Robles has practiced for five years to become very good with a gun, and he is.  However, in a fight before his final two confrontations, he has smashed the wrist in his gun hand.  Now he walks into a final showdown in that condition. 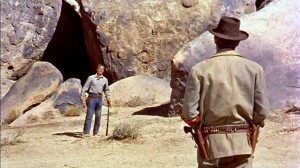 Randolph Scott props himself up using a rifle as a cane, against Lee Marvin in Seven Men From Now.

Seven Men From Now (Randolph Scott, 1956).  Former Sheriff Ben Stride (Randolph Scott) is disadvantaged in his final series of confrontations with miscreants because he can’t walk.  His leg was injured when one of them shot down his horse, and he can only stand using his rifle as a cane.

The Proud Ones (Robert Ryan, 1956).  Aging city marshal Cass Silver (Robert Ryan) may be proud, but he’s also very good with a gun and very experienced at taming wild towns.  However, a bullet creases his skull early in the film, leaving him with impaired vision before his battle with the much larger forces of bad guy Robert Middleton, supported only by his uncertain (but also proud) deputy Thad Anderson (Jeffrey Hunter). 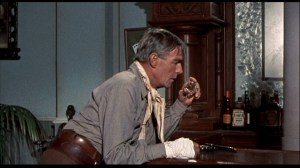 Randolph Scott faces a final shoot-out with a badly wounded hand in Decision at Sundown.

Decision at Sundown (Randolph Scott, 1957).  Seeking revenge for the seduction and subsequent suicide of his wife while he was away at the Civil War, Bart Allison (Randolph Scott again) fights the entire town of Sundown, led by its corrupt sheriff (Andrew Duggan) and head bad guy and seducer Tate Kimbrough (John Carroll).  The otherwise capable Allison’s gun hand is injured before his final shoot-out with Kimbrough.

Forty Guns (Hank Worden, 1957). Hank Worden’s city marshal isn’t much of a gunman (or even a main character), but he is all but blind when he is gunned down by Barbara Stanwyck’s no-good younger brother Brockie (John Ericson).  In this case, picking on an old blind marshal early in the movie is indicative of Brockie’s moral bankruptcy, like shooting a dog or kicking a child.

Terror in a Texas Town (Nedrick Young, 1958).  This is the rare situation where the bad guy, black-clad Johnny Cale (Nedrick Young), has lost his right hand, although he is still good with his left.  The loss of a hand seems emblematic of his psychological deformities, but he doesn’t seem to feel the loss of it in his role as gunslinging enforcer—until he comes up against a whaler (Sterling Hayden) with a harpoon.

Richard Widmark has been beaten and stabbed in the gun hand but still has to go against Henry Fonda in Warlock.

Warlock (Richard Widmark, 1959).  Brave but overmatched Deputy Sheriff Johnny Gannon’s gun hand is heavily bandaged, having been brutally pinned to a table with a knife by his former boss.  Gannon (Richard Widmark) must now face both that boss and his men in the street, followed by an even greater challenge:  going against Marshal Clay Blaisdell (Henry Fonda), who was obviously much better with a gun even before Gannon’s injuries.

The Deadly Companions (Brian Keith, 1961). In director Sam Peckinpah’s first movie, Yellowleg (Brian Keith) has a rifle ball near his collarbone from the Civil War, and it often impairs the functioning of his right arm.  At the start of the movie, it causes him to accidentally shoot saloon girl Maureen O’Hara’s son, and you know it will come up again in a critical situation.

The Gun Hawk (Rory Calhoun, 1963).  Blaine Madden (Rory Calhoun) goes up against the conscienceless gunman Johnny Flanders (Robert J. Wilke) even though his gun hand is all but useless because of a bad wound to that arm.  Not entirely convincingly, he does it by beating him in a fist fight.  Ultimately, however, Madden does not win his bigger fight. 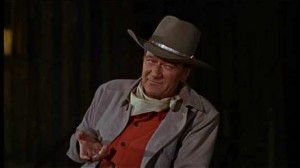 John Wayne’s gun arm goes numb because of an old bullet near his spine in El Dorado.

El Dorado (John Wayne, 1966).  Expert gunman Cole Thornton (John Wayne) has his gun arm occasionally go numb, due to a wound in his back near the spine.  You know this will happen at a critical time.

Arizona Bushwhackers (Howard Keel, John Ireland, 1968).  This laughably bad A.C. Lyles production features the only saloon brawl on film between two one-armed battlers.  One is a wounded sheriff (Howard Keel) and the other is his deputy crippled in the Civil War (John Ireland).

The Shootist (John Wayne, 1976).  Aging gunman J.B. Books (John Wayne) is dying of cancer in turn-of-the-century Carson City.  He arranges to go out on his birthday, in a shoot-out with three of the area’s deadliest gunmen at once.

Dean Jagger in The Proud Rebel

Clifford David in Invitation to a Gunfighter