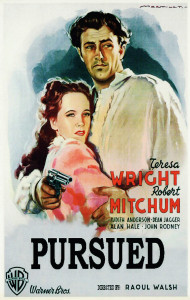 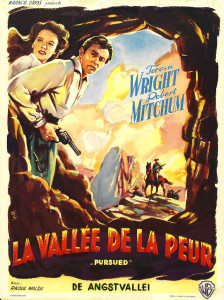 This is a western noir, known as the first of that subgenre.  It is also a range melodrama with overtones of Wuthering Heights and Rebecca.  A not-entirely-clear past haunts and, to some extent, determines the course of the present.  The lead here is Robert Mitchum, the same year that he did the marvelous Out of the Past and one year before another of his best westerns noirs, Blood on the Moon.  The moving spirit behind this production appears to have been novelist and screenwriter Niven Busch (Duel in the Sun, The Furies), then a well-known writer.  He was married to female lead Teresa Wright at the time.

The movie opens with a scene in a long-derelict ranch house in Glorieta Township, New Mexico Territory, early in the 20th century.  Thor Callum (Teresa Wright) enters the place, finding Jeb Rand (Robert Mitchum), who seems to be the subject of the title.  She tells him that she’s not coming with him; he claims he was able to tell that just by looking at her.  The rest of the story is told in flashback. 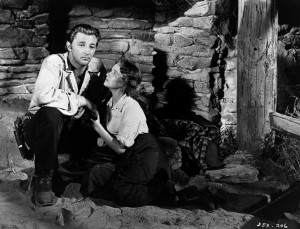 Jeb Rand (Robert Mitchum) and Thor Callum (Teresa Wright) confront both the past and a dim future.

As a child, young Jeb Rand is under a trap door in that same ranch house, terrorized by flashes of light and large flashing spurs, which will haunt his dreams for the rest of the movie.  Mrs. Callum (Judith Anderson), crawling across the floor, rescues him and adopts him as one of her family, along with her daughter Thor (short for Thorley) and son Adam.  Thor and Jeb grow up fond of each other, but Jeb and Adam have an up-and-down relationship with frequent fights.  One day Jeb accuses Adam of having shot a colt he was riding.  Mrs. Callum says it was deer hunters, but she knew it was her one-armed brother-in-law Grant Callum (Dean Jagger), who seems determined to kill the boy but now agrees to let him grow up.

When Jeb (Robert Mitchum) reaches adulthood, he loves Thor but still has a wary relationship with Adam (John Rodney).  They toss a coin to see who will go fight in the Spanish-American War; Jeb goes.  He becomes a war hero and is wounded, returning to the Callum ranch.  He plans to leave the ranch with Thor, and as he returns to make his departure, a figure ambushes him from a high ridge.  Jeb shoots back and hits the figure; it’s Adam.  He is acquitted at an inquest, at which he is prosecuted by Grant Callum, but Mrs. Callum and Thor do not forgive him. 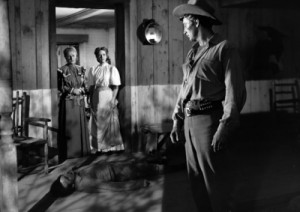 Jeb Rand (Robert Mitchum) does not depart on good terms with the Callums (Judith Anderson and Teresa Wright, with John Rodney prostrate on the ground).

[Spoilers follow.]  Jeb goes into a partnership with the saloon owner Jake Dingle (Alan Hale) and attends a dance to see Thor, who is dating young Prentice (Harry Carey, Jr.), son of the general store owner.  Grant Callum goads Prentice into following and shooting at Jeb, intending to finish the job if necessary, until he is stopped by Jake Dingle. The result is the death of Prentice, further estranging Jeb from the Callums—until Thor appears to start to change toward him, encouraging his suit.  As she explains to her mother, she’ll encourage him until they’re married, and then she’ll kill him.

But Jeb can read her mind, and provides her with a gun on their wedding night.  She switches again, and now loves him again.  But as they speak the house is surrounded by Grant and other Callums with guns.  Jeb makes his escape, with Thor agreeing to meet him at the old ranch house, resulting in the opening scene.  But the Callums show up, too, and they position Jeb for a hanging with a noose around his neck.  A wagon draws up, and it’s Mrs. Callum.  Jeb realizes what was going on the night she found him.  The flashes of light were gunfire, and the spurs were his father’s the night he was killed by Grant and other Callums.  Mrs. Callum had been having an affair with the senior Rand, and that is the root of Grant’s hatred and pursuit of Jeb.  Mrs. Callum stops the hanging by blasting Grant with a rifle, and Jeb and Thor (who has apparently changed her mind again) ride off together. 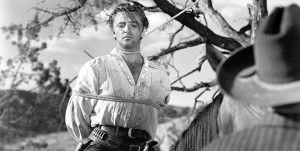 It looks like the Callums will finally get Jeb Rand (Robert Mitchum).

The best performance here is by Judith Anderson as Mrs. Callum, although Dean Jagger is good as the implacable Grant Callum.  Anderson reinforces the similarities with Rebecca, since it was her role as the fierce Mrs. Danvers that hung over that gothic tale.  Her only other western was The Furies, directed by Anthony Mann and also written by Niven Busch.  Robert Mitchum does well as Jeb Rand, the Heathcliff figure, although he is mostly impassive.  Teresa Wright is too sweet-seeming an actress to make the vengeful Thor believable, and, as written, seems to change her motivations abruptly more than once.  Heightening the noir sensibility, a whiff of forbidden sexuality, both past and present, hangs over the film.

Director Raoul Walsh could do well with noir-oriented westerns, as he does here; see his Colorado Territory (1949), with Joel McCrea and Virginia Mayo.  Music is by Max Steiner.  The brilliant black-and-white cinematography is by James Wong Howe; note the use of the canyons and rocks of the southwest (this was shot around Gallup, New Mexico), and the intricate lighting of the night scenes to heighten the noir feel.  101 minutes long. 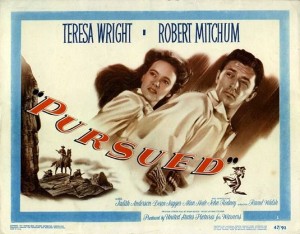