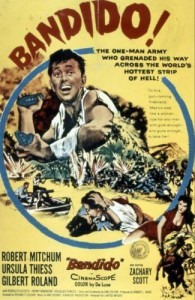 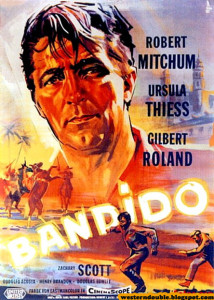 Robert Mitchum had kind of a sub-specialty in westerns about adventurers south of the the border (The Wonderful Country, The Wrath of God, Villa Rides!), of which this is the earliest.  It is set in the revolution of 1916, when Black Jack Pershing and the American army were unsuccessfully pursuing Pancho Villa around northern Mexico in preparation for World War I.  Villa was not the only warlord in northern Mexico fighting the regular army at the time, as we all know from The Wild Bunch.

As this movie opens, an American arms dealer named Kennedy (Zachary Scott) is selling guns to the regulares, as they are known, using his wife Lisa (Ursula Theiss) to charm Mexican officials and high-ranking officers.  As Kennedy puts together a deal with them, some of their marital discord is witnessed by American opportunist Wilson (Robert Mitchum), who wants to highjack Kennedy’s arms and re-direct them to one of the under-supplied warlords, Col. José Escobar (Gilbert Roland).  Heading south from the border to where a battle between Escobar’s partisans and the regulares is taking place, Wilson intervenes with a few well-placed grenades, and Escobar wins.

Opportunist Wilson (Robert Mitchum) adds a few granades to the battle below.

With Wilson’s help, Escobar captures the train carrying Kennedy and his wife.  Kennedy sets up a trap for Escobar in a fishing village with his intermediary Gunther (Henry Brandon).  Instead of Kennedy leading them there, Wilson takes Kennedy’s wife and develops a relationship there.  When the trap is discovered, Wilson escapes and Lisa is captured.  Wilson now persuades Kennedy to tell him where the arms really are, on two barges in another village.

Wilson and Kennedy escape Escobar’s men, but Kennedy takes a bullet in the back.  A sympathetic priest removes the bullet, and Lisa shows up, with the army not far behind.  As Kennedy takes aim at Wilson with Lisa’s purse pistol, he is shot by Escobar, and Escobar and Wilson go to see whether Kennedy was finally telling the truth.  They find the two barges, one with gasoline and dynamite (we can guess what will happen with that one), and the other with arms and ammunition.  But the army and Gunther are not far behind them, and there is a standoff.  As Escobar’s men arrive, they are about to be trapped, until Wilson and Escobar blow up the first barge to destroy the army’s position.  In the end, Escobar gets the arms and ammunition to continue his fight, and Wilson heads back to the U.S. border to look for Lisa.

Escobar’s partisans and Wilson pursue the train carrying the Kennedys.

Silent screen star Gilbert Roland (Three Violent People, Cheyenne Autumn) makes a smoother and more elegant Mexican revolutionary than we usually see.  He is probably the best thing about the movie.   His relationship with Wilson evolves into a kind of Humphrey Bogart-Claude Rains friendship, as in Casablanca.  Robert Mitchum’s voice is excellent, and his performance in this convoluted plot is fine.  Zachary Scott is good as the ill-fated gun dealer.   German-born Ursula Thiess was beautiful, but this was her last movie after marrying Robert Taylor and largely retiring from the movies.  There is little on-screen chemistry between her and Mitchum.  German-born Henry Brandon was no stranger to westerns, having played both Germans in Mexico (Vera Cruz and here) and Indian chiefs (The Searchers, Two Rode Together, War Arrow).

Director Richard Fleischer did not make many westerns, although he made the revisionist The Spikes Gang.  However, he was a mainline director, known for Dr. Dolittle, Tora! Tora! Tora!, Fantastic Voyage, Soylent Green and a couple of Conan movies, among many others.  The film was shot on location at several of the battle sites of the 1916 revolution, using as extras both old-timers who had fought for Villa and former army soldiers who had fought against them.  It marked Robert Mitchum’s first producing effort.  Music is by Max Steiner.  In color, and at 92 minutes it is reasonably enjoyable but not particularly memorable.  Most of it is spent in trying to figure out where Wilson’s loyalties lie, other than to himself.  Turns out he goes for Escobar’s cause and love, not making any money for himself.

The title seems like maybe it once had an exclamation point after it (not usually a good sign, and some posters show the exclamation point), and it is not clear who the bandido of the title is.  There are lots of bandidos in this movie.  It does not appear to be available on DVD.  Not to be confused with Bandidas (2006), starring Salma Hayek and Penelope Cruz.

For other westerns set in Mexico during this revolutionary period, see Wings of the Hawk, They Came to Cordura, The Professionals, The Wild Bunch, The Old Gringo, or any of the westerns featuring Pancho Villa as a character (e.g., Villa Rides! with Yul Brynner, Charles Bronson and Robert Mitchum).