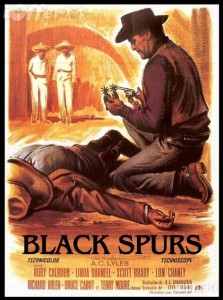 The black spurs of the title belong to an outlaw called El Pescadore (The Fisherman with an extra “e”), who robs a bank in the movie’s first scene.  Santee, a cowhand with ambitions, takes up his pursuit as a more lucrative line of work, and appropriates the black spurs when he gets his man.  Returning to his town in Texas in 1885, he finds that his girlfriend has married a sheriff from Laredo and moved on.

Eventually, Santee comes up with an idea to make his fortune in Kile, Kansas.  The railroad will come through Kile or Lark, but the railroad company avoids disorderly towns when making those decisions (historically, then they become disorderly after the railroad has arrived).  Santee makes a deal with Gus Kile (Lon Chaney, Jr.) to open up Lark, causing the railroad to avoid Lark and go through KIle.  He brings in more gamblers, gunmen (Bruce Cabot) and women (led by Linda Darnell), and backs off Sheriff Henry Elkins (James Best), now married to Santee’s former girl Anna (Terry Moore).  Santee is unable to completely control some of his men, who tar and feather Sheriff Elkins.  Anna reveals that her son is Santee’s, and that she had to marry Elkins to become respectable while he was out hunting El Pescatore. 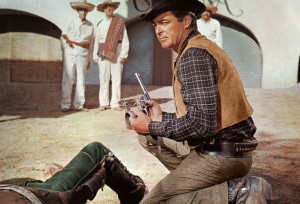 Santee has a change of heart now.  (We always knew he was decent somewhere inside, because he was nice to kids.)  He takes up Elkins’ badge and cleans out the saloon he had set up, taking on four gunmen at once. A preacher with a broken arm, Anna and even the all-but-immobile Elkins take shots during the battle.  Finally, Santee takes down Henderson (Bruce Cabot), who is shot, falls, and is last seen being dragged screaming out of town by his frightened horse.  As Santee rides out of town the next day, he discards the black spurs (reminiscent of Marilyn Monroe’s red slippers in River of No Return, among many other such cinematic gestures).  The truly dreadful theme song intones: “He had no love of his own, because he wore … black spurs.”

This low-budget feature was late in the careers of Rory Calhoun (starting to get a little gray in his hair), Linda Darnell (still beautiful but thickening a bit), Bruce Cabot, who had been playing similar bad guy roles thirty years (Last of the Mohicans, Dodge City) and twenty years (Angel and the Bad Man) previously, and Lon Chaney, Jr.  For Calhoun, this and Apache Uprising (also 1965, also directed by R.G. Springsteen) were his last significant western movies.  It was Darnell’s last movie; she died tragically in a fire the same year at the age of 41 after 25 years in the movies.  Director R.G. Springsteen was nearing the end of his movie career as well, with several low-budget westerns produced by A.C. Lyles.  This is not among the best of Calhoun’s westerns, but it’s not the worst, either. 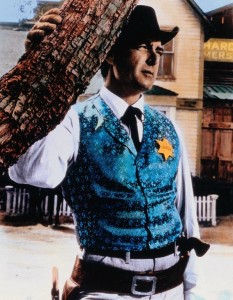 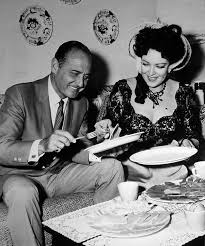 In the 1960s, A.C. Lyles produced a series of thirteen low-budget westerns for Paramount, of which this was the fourth.  One of the ways the budget was kept down was to use journeyman directors (like Springsteen) and to use stars with recognizeable names but who were past their primes–like those in this film.  Silent screen star Richard Arlen was in several of them, including in this as a hard-bitten saloon owner.  Shot in color at Ray Corrigan’s ranch in Simi Valley, California, at 81 minutes.

For better Rory Calhoun, see Dawn at Socorro or Apache Territory.  For better Linda Darnell in a western (and her role here as Santee’s imported madam from New Orleans is quite minor, although she received major billing with Calhoun), see The Mark of Zorro, My Darling Clementine and Two Flags West, all from the 1940s.  For another bounty hunter named Santee, see Glenn Ford in Santee (1973)—not one of his better westerns, either.