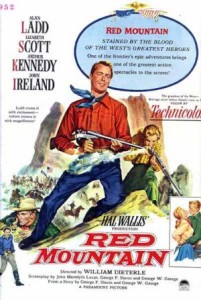 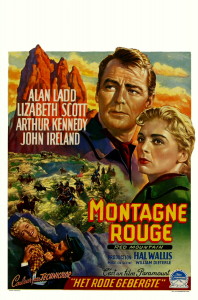 This is one of Alan Ladd’s more elusive, seldom-seen westerns, a Civil War story with an excellent cast.  Ladd plays Brett Sherwood, a captain from Georgia who has gone west in April 1865 to Colorado Territory to meet up with “Gen.” William Quantrell.  (Reality note: Usually spelled “Quantrill,” he was a colonel at best, and he was long dead by this time, having been killed in Missouri.)  The opening scene shows the legs of a person in the town of Broken Branch dismounting and killing an assayer, hiding his identity.  Since a rare form of Confederate ammunition was used, the locals figure that former Confederate soldier Lane Waldron (Arthur Kennedy), paroled after he was captured at Vicksburg, is responsible.

A lynch mob captures Waldron and is about to hang him when Sherwood shoots the rope (a la Clint Eastwood in The Good, the Bad and the Ugly) and helps him escape. When Waldron discovers his rescuer is also a Confederate, he figures Sherwood killed the assayer, and, with the help of his fiancée Chris (Lizabeth Scott), he ungratefully captures Sherwood to turn him in and exonerate himself.  Waldron has found a significant gold strike and wants to stay in the area to work it. 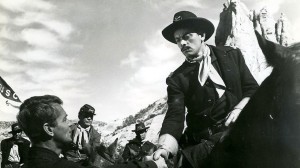 The upper hand shifts back and forth a couple of times until Waldron’s leg is broken in a scuffle. Sherwood flags down a passing Union patrol, which turns out to be a group of Confederates and their Ute sympathizers led by Gen. Quantrell (John ireland).  Chris, a Union sympathizer who had lived in Lawrence, Kansas, when Quantrell raided there, is horrified.  Sherwood works to keep the two prisoners alive, while Quantrell is pleased to have another military officer and kindred spirit.  Gradually Quantrell reveals plans to foment a larger Indian rebellion (involving Comanches, Cheyennes, Utes and others) in the wake of the Civil War.

Chris is allowed to retrieve a doctor for Waldron, who is in bad shape, but the doctor is killed when Sherwood helps him escape.  Against her better judgment, Chris is falling for Sherwood rather than Waldron, and Quantrell also becomes suspicious.  As Sherwood helps Waldron and Chris defend themselves against the Utes, a real Union patrol attacks Quantrell.  As Quantrell flees, Sherwood takes after him, and gets him in a final shootout.  Waldron is dead of wounds by this time, and, as Sherwood recovers from his own wound, he confesses to the marshal that he killed the assayer.  Sherwood had found a claim in Colorado Territory before the war, and the assayer had stolen it.   Apparently Sherwood and Chris end up together.  (We knew any character played by Arthur Kennedy was unlikely to get the girl.)  Chris knows where Waldron’s gold strike was.  And word reaches them that the Civil War has ended two days earlier. 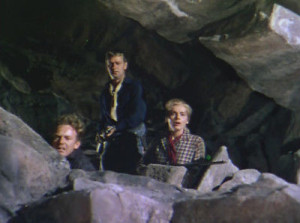 Lizabeth Scott, best known for her work in films noirs, is fine here in one of her two westerns (with Silver Lode [1954]).  Alan Ladd makes a sympathetic leading man, as usual, and is obviously becoming more comfortable in westerns than he was in Whispering Smith.  If you haven’t seen him in a western, you should start with Shane and maybe Branded, both from around the same time as this film; but this one isn’t bad aside from the obvious historical impossibilities.  Character actors Jeff Corey and Neville Brand show up in small parts as a couple of Quantrell’s troopers.  Jay Silverheels is Ute chief Little Crow.

William Dieterle (The Hunchback of Notre Dame [the Charles Laughton version, 1939], Kismet [1944], Portrait of Jennie [1948]) was a mainstream director, not particularly known for westerns.  The uncredited John Farrow directed a few scenes when Dieterle was unavailable during filming.  Music is by Franz Waxman.  Shot in color by Charles Lang around Gallup, New Mexico, at 84 minutes. 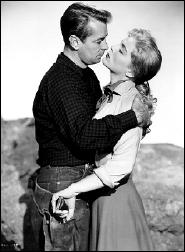 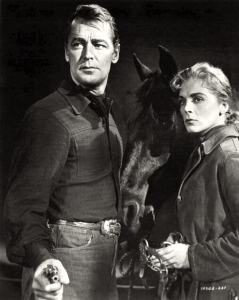 For another western that has Quantrell surviving the war and heading out west to continue his depredations, see Arizona Raiders (1965), with Audie Murphy.