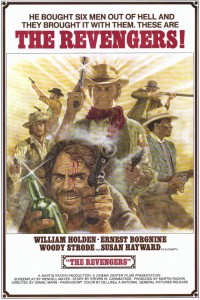 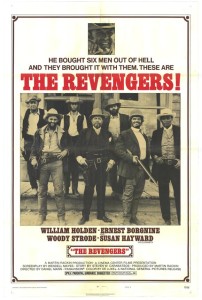 It is doubtful that “revengers” is even a real word, but you get the idea.  Somebody’s after vengeance in this Dirty-Dozen-style flick.  That would be John Benedict (a visibly aging William Holden at 54, after years of hard living).  He’s a Colorado rancher whose family is slaughtered by Comancheros and their Comanche allies during a horse-stealing raid.  He tracks them down to the borders of the U.S. and Mexico, and figures he needs help.  Spotting a Mexican prison that rents out convict labor, he hires six of their worst inmates.  Leaving the guards behind, he gets the six decent clothes and weapons, but has some difficulty getting their active allegiance (a staple of this kind of film). 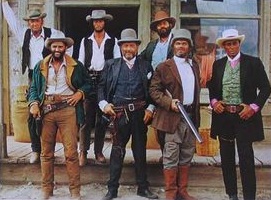 He leads them in an attack on the Comanchero stronghold, getting most of the Comancheros.  The Comanchero leader Tarp (Warren Vanders) escapes, although wounded.  Depressed at this failure, Benedict drinks heavily and has a falling-out with one of the six, a Mexican gunslinger who fancies that he may be Benedict’s son.  The six scatter, and Benedict, grievously wounded, is tended by the local healer, an Irish nurse of a certain age named Elizabeth Reilly (Susan Hayward).  There is some attraction between them during the time it takes Benedict to heal, but he rides off in search of closure with Tarp. However, he is arrested and thrown in the Mexican prison from which he had helped the six escape.

Two of the six, Hoop (Ernest Borgnine) and Chamaco (Jorge Luke), the Mexican gunslinger, reassemble the six.  They spring Benedict from the Mexican prison and resume the search for Tarp, whom they find held by a small U.S. cavalry unit besieged by Comanches and Comancheros, who want him back.  Benedict proposes to kill Tarp and send him back to the Comanches that way, but doesn’t proceed with that out of respect for the badly wounded lieutenant in charge.  Benedict and the six join the outnumbered cavalry and use dynamite and a little artillery to make a last stand.  The cavalry wins, but not without casualties.  The lieutenant and the Mexican gunslinger Chamaco are among them.  And Benedict rides away without killing Tarp, having belatedly decided that revenge is an empty motivation.

The wounded Benedict (William Holden) and Irish nurse Reilly (Susan Hayward) get to know each other.

There are a couple of things about the movie that don’t work very well.  One is the interlude with the Irish nurse (Susan Hayward) that doesn’t really go anywhere. Her accent isn’t good; it clanks as badly as Barbara Stanwyck’s faux-Irish in Union Pacific (1939).  When Hayward makes a reference to the possibility of having children, we notice that she seems to be in her fifties (at 55, she was a year older than Holden and three years away from her death of cancer) and children are improbable.  Benedict is supposed to be good with a gun, but he looks his age, his shoulders are rounded by now, and he’s not all that persuasive as a gunslinger.  And the ending, with Benedict just walking away from the revenge that has been the point of the movie, is similarly unpersuasive.  At the least, you’d expect that one of the remaining five would get Tarp, since they’ve all demonstrated that they’re not good at impulse control.  Most of the six are not well fleshed-out characters, but the film does keep moving.

Daniel Mann (The Rose Tattoo [1955], The Teahouse of the August Moon [1956], Butterfield 8 [1960], Our Man Flint [1966] et al.) didn’t do many westerns; this may be the only one.  Holden and Borgnine (a replacement for Van Heflin after Heflin’s unexpected death) were reunited from The Wild Bunch (1969) for more adventures in Mexico here, but this doesn’t remotely approach that classic in quality.  This is Holden’s last western.  Hayward, in her extraneous role, was coming to the end of her career and wasn’t making many movies.  This was written by Wendell Mayes, who had been nominated for an Oscar for his screenplay for Anatomy of a Murder.(1956), and who went on to write the blockbusters Death Wish and Towering Inferno.  The music occasionally reminds one of 1970s television.  In color, shot in Sonora, Mexico, at 106 minutes.  It was made available on DVD in May 2014, with a blu-ray to come in August 2015.

Benedict (William Holden) prepares to hold off the Comancheros and their Indian allies.

Although it was released in the heyday of the revisionist westerns of the 1970s, this is more traditional in its approach and sensibility.  For better Holden and Borgnine at this late stage of their careers, see, obviously, The Wild Bunch.  For good Susan Hayward in a western, you have to go back twenty years to Rawhide (1951) and Garden of Evil (1954).