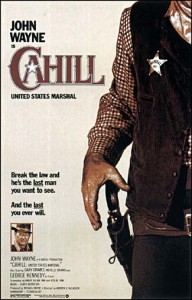 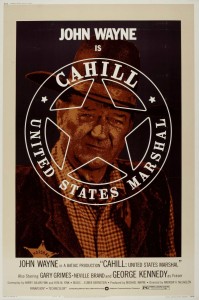 The late phase of John Wayne’s career was unusual because, unlike his contemporaries such as Henry Fonda and James Stewart, while he continued to make westerns as they did, some of Wayne’s were actually pretty good.  While this is not the best of late John Wayne, it is not among the worst, either.

J.D. Cahill (an aging John Wayne) is, as the title has already told us, a U.S. marshal, based in Valentine, Texas.  The drama comes because he has been, as a widower, a neglectful father, with his two sons (aged 11 and 17) growing up resentful of his constant absences from their lives.  The movie opens with a scene where Cahill catches and brings in five armed bank-robbers single-handedly, establishing his formidable competence as a marshal. 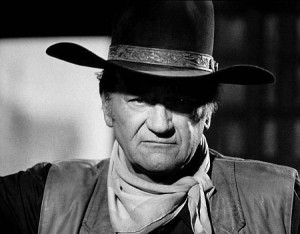 J.D. Cahill (John Wayne) is clearly nobody to mess with.

Meanwhile, back in town, his older son Danny (Gary Grimes) has fallen in with bad company and has gotten himself thrown in jail with them to establish an alibi for a criminal enterprise.  The younger son Billy Joe (Clay O’Brien) has also been enlisted in the plan, moving the tools into position, providing a distraction for the sheriff and others by setting fire to a barn, and taking and hiding the loot after the job.  He lets the conspirators, led by Fraser (George Kennedy), out of jail, and they proceed to rob the bank, killing the sheriff and a deputy in the process.  They get back into jail as if they’d never been out, establishing their apparent innocence.

The boys, especially Billy Joe, have a tough time, since they’re not really hardened outlaws and were promised there’d be no killing.  J.D. takes Danny and the half-Comanche Lightfoot (Neville Brand in dark makeup) in pursuit of the supposed robbers, and catches four of them.  They seem guilty enough so they are sentenced to hang, although Danny knows they are innocent—of the bank robbery, at least. 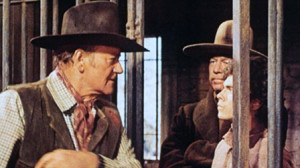 He may be lacking as a father, but Cahill’s instincts as a manhunter are at full strength, and he knows something is up with his sons.  He and Lightfoot track them as they take the money from the robbery up in the mountains to meet Fraser and the others at a mine.  They are shot at by the gang’s sentry; Lightfoot wounds him but is himself killed.  The sons know that Fraser does not intend to leave them alive.  Since we have already seen Cahill take on several bad guys at one time, we are not surprised when he does it again; it is well-staged.  The sons take the loot back to town to return it, and it looks like they’ll arrive in time to stop the wrong men from hanging.  (They should still need a good lawyer, although that isn’t addressed.)  Cahill’s left shoulder is wounded twice in the course of the movie, but it looks like some repairs have been made to his relationship with his sons as well.  Maybe the future will be better.

The working title of the film initially was “Wednesday Morning.”  Produced by Wayne’s Batjac production company, there are elements of this we’ve seen elsewhere.  The faux-Indian figure (played by Howard Keel in The War Wagon and by Bruce Cabot in Big Jake) is here done best of all by Neville Brand, although he was never an actor of much subtlety.  Elmer Bernstein had done many musical scores on John Wayne movies (e.g., The Comancheros), and elements of the music here seem recycled.  Cahill’s invincibility seems a bit overdone, although it is a critical element of the story and certainly of the John Wayne persona.  The large hairy outlaw who doesn’t speak much but is a vicious killer seems imported from Big Jake.

Head bad guy Fraser (George Kennedy) is pretty scary to an eleven-year-old in the rain.

John Wayne is, well, very much John Wayne in this movie.  His hats got taller during the 1970s, but he still looked convincing in a well-written part.  At 66, he was not in good health, suffering from emphysema and the lung cancer that would kill him in a few years.  Reportedly, he also had a few pangs about his own paternal neglect of his children over the years, which was partially addressed here by having one of them (Michael Wayne) as the producer.  In the early 1970s, Gary Grimes specialized for a few years in coming-of-age stories, notably in Summer of ’42, but also in westerns such as The Culpepper Cattle Company and The Spikes Gang, and he wasn’t bad at it.  Young Clay O’Brien, who played the younger son, was an authentic New Mexico cowboy whose first acting job had been on Wayne’s The Cowboys the previous year.  After a few years of playing small cowboys in movies, he went back to real cowboying, becoming a champion roper.  Part of the fun here is seeing all the good character actors in bit parts. Royal Dano, Paul Fix, Hank Worden, Marie Windsor (once queen of the B movies), Denver Pyle and Harry Carey, Jr. all show up briefly here.  Even Chuck Roberson, Wayne’s long-time stand-in and stunt double, shows up on screen here; in addition to playing the head of a lynch mob, most of the medium-to-long shots of Cahill on a horse are actually Roberson. 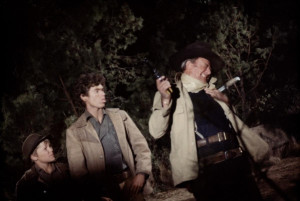 Director Andrew McLaglen had long had connections with John Ford and John Wayne through his father, actor Victor McLaglen.  This was his fifth and final movie directing John Wayne, and as a movie director, McLaglen was a pretty good television director; that is, he never seemed to be as good as he should have been, given the resouces and talent he often had to work with at this stage of his career (see The Way West, for example).  Screenwriter Harry Julian Fink and his wife Rita Fink had written Dirty Harry and Big Jake, and would go on to do a few more Clint Eastwood Dirty Harry movies.

This movie is not the best of Wayne’s late career; The Cowboys, Big Jake and The Shootist (his last film) are all better.  But it’s far from the worst, which would include the lamentable Rio Lobo and The Train Robbers.  All in all, it’s worth watching, even if it sometimes seems like there’s less here than meets the eye.  Shot in Durango, Mexico, in color, at 103 minutes. 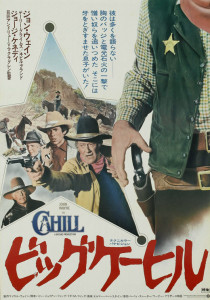 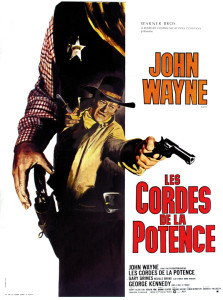