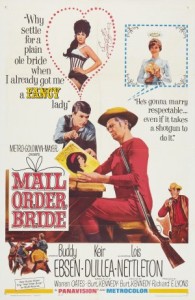 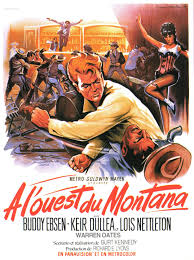 Burt Kennedy started out as a stunt man but quickly moved into writing, particularly for John Wayne’s Batjac production company.  His writing career is most notable for Kennedy having penned the best of the Budd Boetticher–Randolph Scott collaborations, beginning with Seven Men From Now (1956). From there he eventually moved into directing, and this was his second movie. The first (The Canadians [1961]) had not been a success.

At the start of this film, young Lee Carey (Keir Dullea) is fitfully working a small ranch in Montana, although he doesn’t much like to work.  He has fallen in with bad companions, especially his friend Jace (Warren Oates).  Into this situation rides aging former lawman Will Lane (Buddy Ebsen), a friend of Lee’s deceased father—a good enough friend, in fact, that Lee’s father left him title to the ranch.  Lane is supposed to pass title to the ranch along to Lee when/if he decides that Lee is responsible enough to make a go of it, which he isn’t yet. 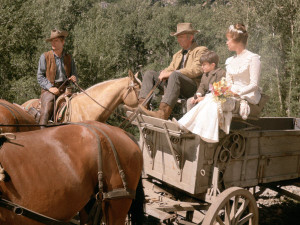 Lane decides that what Lee needs is the love of a good woman and the responsibilities of family life, a view that Lee doesn’t share.  Lane heads for Kansas City, where he meets Hanna (Marie Windsor) at her saloon.  When she hears about his quest, she steers him to Annie Boley (Lois Nettleton), a widow with a young son who works cleaning up the saloon/hotel.  She nervously agrees to give the idea a try, and Lane, Annie and son take the train for Montana.

Lee has been hanging out with Marietta (Barbara Luna), his favorite prostitute, when they arrive.  He reluctantly agrees to Lane’s proposition, but he doesn’t anticipate the arrangement will be permanent.  To his credit, he also explains his approach to Annie, so she doesn’t expect anything more.  Meanwhile, he tries to put on a good front, building a new house for Annie and son and working the cattle so Lane will give him the title to the place and he can return to his old life.

Lee (Keir Dullea) tries to persuade Will Lane (Buddy Ebsen) that he’ll take care of his new family by building a house.

He likes Annie well enough, but finds that Marietta will no longer consort with him now that he’s a married man, since she seems to take marriage (even a sham marriage) more seriously than he does.  In frustration he gives up and sets up a plan with the no-good Jace to steal all the cattle.  Jace tries to expedite things by setting fire to the half-built cabin, almost killing Annie’s young son Matt in the process.  That finally tears it for Lee, who has bonded with the boy (and with Annie, to some extent).  He seeks Lane’s help in rectifying things.  When Jace declines to give back the cattle, a classic showdown confrontation follows.  At the end, although both Lee and Annie want him to stay, Lane rides on because they no longer need him–kind of like an aging western Mary Poppins.  He appears to be headed to Kansas City to renew his acquaintance with Hanna.

This is slight and predictable fare, but quite watchable—more than a synopsis of the plot would suggest.  The two performances that make it work are by Buddy Ebsen, who plays Will Lane with some restraint and believability and a little steel, and Lois Nettleton, as Annie, the hopeful young widow with a son.  Not conventionally beautiful, Nettleton is now remembered principally for her work in middle-aged character parts, but here she is excellent as a young woman in a role that calls for vulnerability and some nuance.  Keir Dullea (now remembered mostly for 2001: A Space Odyssey) does well enough, but, aside from treating Annie reasonably well, his character is written so that there’s not much else to recommend him after he’s spent almost the entire movie as a wastrel.  Warren Oates plays Warren Oates’ usual sort of character very well.  There are also good character actors here:  Paul Fix as the local sheriff, Denver Pyle as the preacher who marries Lee and Annie, and especially Marie Windsor as Hanna, the warm and wise Kansas City saloon proprietor. 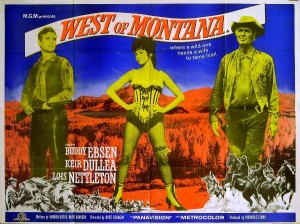 This alternative poster features not Annie Boley but Marietta (Barbara Luna) in the center.

Buddy Ebsen had started on Broadway as a dancer with his sister Velma, eventually co-starring with Shirley Temple (Captain January, 1936), Judy Garland (Broadway Melody of 1938 [1937]) and even being cast as the Tin Man in The Wizard of Oz, until he had to pull out when the aluminum paint initially used in the makeup almost killed him.  Before this film, he had been seen principally as Davy Crockett’s sidekick George Russell in the Disney films with Fess Parker.  Now he had a television success as one of the principals in The Beverly Hillbillies, and would later go on to star for several seasons as aging detective Barnaby Jones on television.  He’s good enough here to make us wish he had made more westerns.

Burt Kennedy would hit his peak as a director a little later in the 1960s with The War Wagon and especially with his masterpiece Support Your Local Sheriff.  From there it was mostly downhill, as he drifted toward good-ol’-boy westerns with a comedic edge, often featuring country music people.  He could be an excellent writer, and he wrote this modest effort.  Shot in color around Kennedy Meadows in California’s central Sierra Nevadas, at 83 minutes.  It might be hard to find, but it’s decent to watch.

An alternative title was “West of Montana.”  The title Mail Order Bride has been used for a number of other films and books.  Not to be confused, for example, with a 2008 Hallmark made-for-television feature with the same name starring Daphne Zuniga.