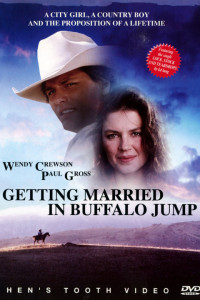 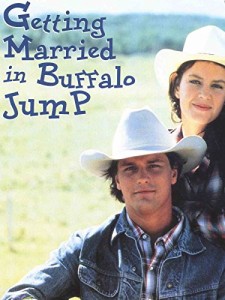 This Canadian television production is a modern romance set in ranching country in Alberta–a variation on the old theme of The Arranged Marriage.  You can tell where it’s going from the title (Buffalo Jump being the fictional town around which this is all going on), but it takes the entire 137 minutes to get there.  So the question is not what will happen, but how it will happen, given the disparate personalities involved.

Sophie Ware (Wendy Crewson) has returned to Buffalo Jump fifteen years after graduating from high school there. She spent those years going to college in eastern Canada and working as a piano act in lounges in Toronto.  Now her father has died, leaving her his ranch.  She’s determined to keep it despite her Scottish mother’s continual insistence that she sell it, and she needs some one to help her with it.  On the recommendation of Mrs. Bresnyachuk, she hires the woman’s son Alex (Paul Gross), whom she sort of knew in high school. 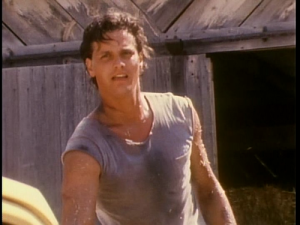 Alex Bresnyachuk (Paul Gross) is good at ranching, but not so good at talking.

Unlike Sophie, Alex is good on a ranch, persuading her to run more practical cattle instead of the horses her romantic sensibility is drawn to.  He’s taciturn, seldom communicating much about his feelings.  And he’s more traditional about male-female relationships than the cosmopolitan Sophie.  After Sophie breaks a date with the local principal/math teacher to go out with Alex instead, he makes her a business proposition:  she brings the ranch, he brings the working expertise, and they marry to continue the operation.  This is not really how she’d envisioned this particular life event happening, and she rejects the notion … at first.

Sophie: “All right, Alex, how about we simply court in the traditional, time-honored fashion? Okay, we have a quick bout of nude wrestling, followed by confessions of doubt, leading to mutual rejection and if by some miracle we find it’s true love, we’ll cry, say we’re sorry and then wrestle some more.  I’m not marrying a man I don’t know, Alex.” 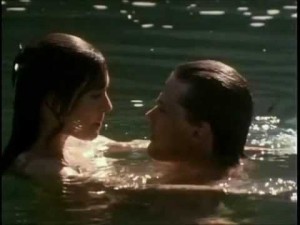 Sophie Ware (Wendy Crewson) and Alex (Paul Gross) get to know each other in a scene that is not exactly typical of the movie.

Alex had dropped out of high school and had come back to finish (in three months) at 22, after working for an oil company.  His family’s farm/ranch is crowded, with four men (his father and two brothers in addition to Alex) in one house, he says.  Sophie learns that Alex left town when he fathered a child with his Indian girl friend Annie Moore.  Sophie finds Annie (Kyra Harper) in a bar, and Annie is initially both tough and hostile.  But they bond over some drinks and start to develop a relationship.  And Sophie accepts Alex’s business proposition, although there are indications on both sides that something besides business is going on.

Annie (about Alex, after discussing his shortcomings as a high school boyfriend):  “He sure is one beautiful man, though.”
Sophie:  “Between you and me, he makes the backs of my knees sweat.”

Meanwhile Sophie’s mom Irene (Marion Gilsenan) invites Sophie’s friend Eleanor (Victoria Snow), a high-powered realtor, for a visit.  Sophie and Eleanor have a good time, although Sophie still wants to keep the ranch.  Eleanor seeks out Alex, and has a conversation with him in which he says nothing.  Afterward, he tells Sophie, “I liked her.” 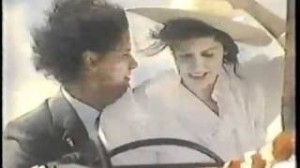 Alex and Sophie on the marriage tractor.

The final hurdle is Alex’s parents, the Bresnyachuks, who, in Old World style (they’re Ukrainian), want to negotiate a marriage settlement.  Sophie is deeply offended that they expect her to buy Alex, in effect, with title to half the land.  Alex tries to woo her back with a horse, but ends up giving it to his 13-year-old son Benny, whom he’s never really met before.  Strangely enough, Sophie takes that as a good sign.  The marriage happens, and they drive off into the sunset on a tractor.

As you might guess from this description, a lot depends on how good the two leads are, and they are very good indeed.  This is better than the synopsis sounds, with some crisp and feisty dialogue, although not much of it by Alex (Paul Gross), who is an excellent actor (Gunless, Slings and Arrows) in addition to being good-looking.  This is fairly accurate in its portrayal of family dynamics, the inability of one generation to talk to another, and the temperaments of some people in cattle country, particularly men.  Wendy Crewson, best known as Pres. Harrison Ford’s wife in Air Force One, is very good as Sophie.  Things are wrapped up rather expeditiously at the end, particularly Alex’s new relationship with his son Benny.  But for light romantic fare, you could do a lot worse.  This is a sleeper that should have received more attention.

Shot in and around the towns of Cowley, Lundbeck and Pincher Creek, Alberta; the scenery and surrounding country form a significant part of the ride.  The sound track includes three songs by Canadian country singer K.D. Lang.  Based on a novel by Susan Haley. 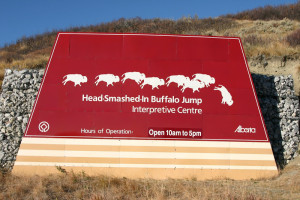 Historical note:  A buffalo jump is a site where Indians, before they had horses, drove buffalo herds over a cliff to collect their meat and hides (not a particularly efficient way to hunt).  One of the best-known buffalo jumps in North America is in southern Alberta, called Head-Smashed-In, used by the Blackfeet.