Almost as long as there have been movies, the black-clad avenger of Spanish California has appeared in them.  Johnston McCulley’s serial The Curse of Capistrano was first published in 1919 in the pulp magazine All-Story Weekly, to be followed by three more serialized Zorro stories in Argosy magazine.  The first movie Zorro was one of the best, appearing in 1920, the year after McCulley’s original publication:  the dashing and acrobatic Douglas Fairbanks.  Five years later he starred in a sequel, Don Q, Son of Zorro.

Zorro never entirely left the screen for any long periods, but the next notable cinematic Zorro was Tyrone Power, romancing Linda Darnell and memorably fighting Basil Rathbone in 1940’s The Mark of Zorro.  The 1940s also saw Zorro appearing in various serials, like Zorro’s Black Whip, Zorro’s Fighting Legion and The Ghost of Zorro.  With the coming of television in the 1950s, Walt Disney provided the Baby Boomers with their most familiar version of the masked Californian—Guy Williams as the television Zorro. 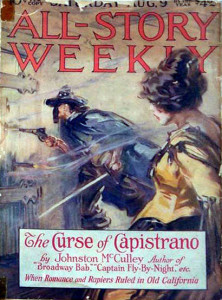 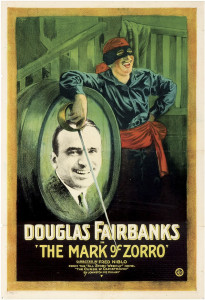 Disappearing from screens both large and small during the 1960s (except perhaps for a couple of spaghetti versions), Zorro came back in the 1970s to be played by Frank Langella and French actor Alain Delon.  He was established enough as a cultural icon to be played for satire by George Hamilton in Zorro, the Gay Blade (1981).  And most recently he came back to be played by both an aging Anthony Hopkins and Spanish actor Antonio Banderas in The Mask of Zorro (1998) and its less successful sequel The Legend of Zorro (2005).

Historical note:  Although Zorro is firmly attached to a particular time and place (pre-1820 Spanish Southern California, before Mexican independence), Zorro is not in fact an actual historical character but a fictional creation of a pulp writer in 1919.  He is fun, though, when done well.  The Banderas Zorro movies attempted to merge the fictional Zorro with the actual Mexican-era bandit Joaquin Murrieta, with limited success.  One of the problems with Zorro has always been that his primary weapon is the sword, which leads to exciting duels with the sword-wielding bad guys played by Basil Rathbone and others.  But in an era when firearms were common, Zorro would have been in trouble relying on a sword or a whip too much. 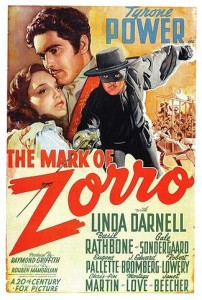 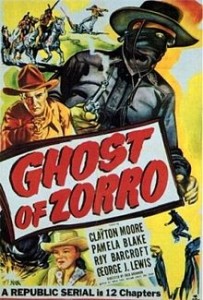 The Mark of Zorro—Fairbanks, Beery (1920, silent)
Don Q, Son of Zorro—Fairbanks, Astor (1925, silent)
The Bold Caballero—Livingston (1936)
The Californian—Ricardo Cortez (1937), in an obvious version of the Zorro story with other names.
The Mark of Zorro—Power, Darnell, Rathbone (1940)
Zorro’s Black Whip (1940s Republic serial with a woman as Zorro in Idaho; Zorro’s Fighting Legion, Ghost of Zorro et al.)
Sign of Zorro—Williams (1958; cobbled together from the 1950s Disney series)
Behind the Mask of Zorro (1965, Italian)
The Nephews of Zorro (1968, Italian)
The Mark of Zorro—Langella, Roland, Montalban (1974, MfTV and based on 1940 Power version)
Zorro—Delon (1975, French-Italian Zorro in South America)
Zorro, The Gay Blade—Hamilton, Hutton (1981)
The Mask of Zorro—Banderas, Hopkins, Zeta-Jones (1998; Dir: Campbell)
The Legend of Zorro—Banderas, Zeta-Jones (2005; Dir: Campbell) 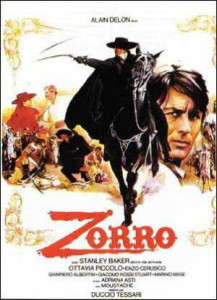 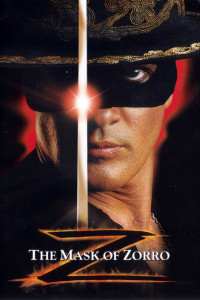