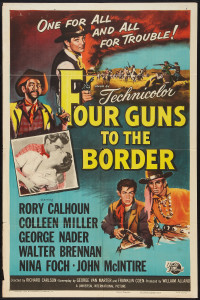 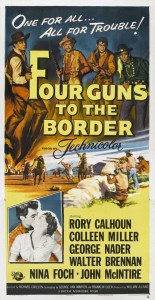 Based on a story by Louis L’Amour, this unpretentious western also has an excellent cast.  The writing and direction aren’t quite as good as the cast and story, but it’s worth watching, particularly if you like Rory Calhoun.  At this stage of his career, Calhoun played the protagonist in lower-budget movies (e.g., Dawn at Socorro, Apache Territory), while he was often the villain in big budget productions (The Spoilers, River of No Return).  Here he is something of both, but mostly the protagonist.  The cast includes John McIntire and Walter Brennan, both excellent character actors who didn’t often appear in the same movie, since they tended to play the same kind of old-coot-ish roles. (But see them together in The Far Country, where they’re both pretty good.)

In 1881 the four riders of the title are moving through Apache country, presumably in Arizona or New Mexico, when they come upon Simon Bhumer (pronounced “Boomer,” played by Walter Brennan) and his nubile, tomboyish daughter Lolly (Colleen Miller), fresh from finishing school.  Both Cully (Rory Calhoun), the leader of the four, and Bronco (George Nader) are visibly taken with her, but Simon thinks none of them are good enough for her.  In fact, he’s right.  The four are headed to pull off a bank robbery, while Simon and Lolly are going back to his ranch in Shadow Valley through territory infested with Apaches. 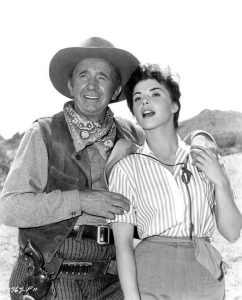 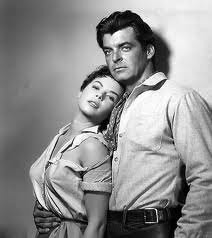 All six spend the night at Greasy’s general store, while Greasy (Nestor Paiva) reconnoiters in town to verify that the bank currently holds enough money to make robbing it worth while.  Cully has a combustible scene or two with Lolly until Simon breaks it up.  Gang members Bronco and Yaqui (Jay Silverheels) fight regularly, seemingly out of exuberance.  Dutch (John McIntire) has known Simon a long time; they were both quasi-outlaws, until Simon went straight.

The gang’s plan for the bank involves Cully creating a diversion while the robbery takes place, and then the gang bolts for the border.  Cully and Sheriff Jim Flannery (Charles Drake, previously seen as Shelly Winters’ ineffective boy friend Steve in Winchester ’73) were once young hellions, both vying for the affections of Maggie (Nina Foch), who chose Jim.  Cully picks a fight with Jim, which engages the town’s attentions until Maggie breaks it up.  Having completed the robbery as planned, the four head for the border with a posse in pursuit.  Back at Greasy’s store, they find it burned by Apaches, with Greasy dead.

[Spoilers follow.]  Meanwhile, Simon Bhumer’s horse goes lame, and he and Lolly are besieged by Apaches.  Cully hands the loot to Dutch and takes off to help.  Dutch gives it to Bronco and follows, and finally Bronco and Yaqui head for the battle, too.  It’s a desperate matter, and one by one Dutch, Yaqui and Bronco are all killed and Cully is gravely wounded.  Yaqui had used the bag of loot to bash an Indian, and the coins are scattered all over the site.  Simon and Lolly take Cully to the Shadow Valley ranch, and when the posse arrives at the battle site to chase off the Apaches, only bodies and the scattered proceeds of the robbery are left.

At the Bhumer ranch, Cully’s wound is bad enough so Simon has to go for medical help.  Flannery and two deputies arrive and start to shoot it out with Cully.  He calls out Flannery, while Lolly tries to talk him out of it.  As Cully and Flannery advance to their showndown, finally Cully surrenders—persuaded at last by the love of a good woman. 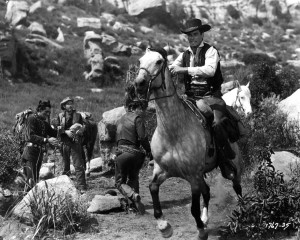 As a general matter, this is above average.  Rory Calhoun is good here, and the film has also surprisingly strong female roles.  Both Colleen Miller as Lolly and Nina Foch in a limited role as Maggie are good; Calhoun and Miller have good chemistry together.  Jay Silverheels has one of his best roles, not to mention a very colorful costume.  All in all, this is a good early Calhoun western.  The ending, with Cully giving himself up, is not entirely satisfying, but it’s how such matters were handled in westerns from the 1940s and 1950s (see Joel McCrea in Four Faces West and Fred MacMurray in The Moonlighter for just two other examples).  The good guy could not be allowed to get away with crime even if he was repentant, lest all society fall apart. 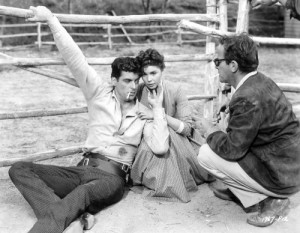 Richard Carlson is known mostly as an actor in supporting roles, but he directs competently here in his second feature.  In color, at 83 minutes.  This can be hard to find, since it is apparently not available in the U.S. on DVD.