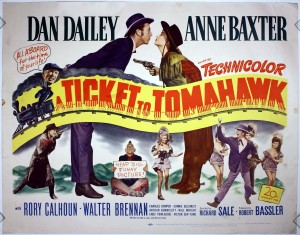 One more musical number, and this western comedy would have been a full-fledged western musical.  The fictional Tomahawk & Western Railroad needs to get a train to Tomahawk, Colorado, in early September 1876 to fulfill its charter, or it will lose its right to operate there.  But it has enemies, primarily Col. Dawson, who runs the stage line in the area and doesn’t want the competition, and his henchmen; and the disgruntled Arapahoes led by Crooked Knife.  And a few minor problems, such as the fact that of the final sixty miles of the line from Epitaph to Tomahawk, forty of those miles have no track.  (Apparently fabricated in England, the rails were lost in transit off Cape Horn).

A paying passenger has bought the ticket of the title; he is Johnny Behind-the-Deuce (Dan Dailey), a footloose, well-traveled card shark and drummer selling mustache cups.  He arrives in Epitaph in company with Dawson henchmen, who wound Marshal Kit Dodge (veteran character actor Will Wright) so that his straight-shooting granddaughter Kit Dodge Jr. (Anne Baxter) has to take over the effort to get the train the last sixty miles.  And they are joined by Dakota (Rory Calhoun), secretly another of Dawson’s henchmen; Madame Adelaide (Connie Gilchrist) and her troupe of theatrical “ladies”; a Chinese laundryman; and Kit’s stoic Indian watchdog Pawnee (Chief Yowlatchie, best remembered now for his role in the classic Red River). 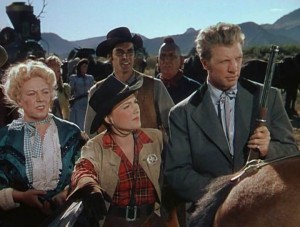 Figuring that determination will overcome all obstacles, strings of mules are hitched up to the locomotive to tow it where the tracks don’t go.  Initially that works, until they arrive at Massacre Creek to discover the railroad trestle has been blown up by Dawson’s men. It turns out that Johnny knew Crooked Knife from their time together in a wild west show, and Johnny persuades the Arapahoes to help disassemble the locomotive and get the train up over an alternative route via Funeral Pass.  As the deadline approaches, the train is still just outside of Tomahawk until Johnny convinces the Tomahawk town fathers to extend the city limits to where the locomotive is.  He plans to be on his way, but young Kit has other ideas.  “Maybe you wouldn’t be so loose-footed if I gave you a permanent limp!”

[Spoilers follow.]  In the last scene, Johnny is about to board yet another train.  But finally he puts on the conductor’s hat and bids a temporary farewell to young Kit and their five daughters, who seem to bear the same names as Miss Adelaide’s girls. 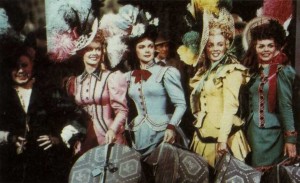 Miss Adelaide (Connie Gilchrist) and her girls. The one in yellow might look familiar.

Of course, none of this is very serious and the sensibility is very much like Annie Get Your Gun, from about the same time.  The gender roles and romantic expectations are very much of the 1950s, too, although Anne Baxter’s role as the younger Kit Dodge is a reversal of sorts.  Dan Dailey showed up in musicals of the time (There’s No Business Like Show Business, Give My Regards to Broadway) but this may have been his only western.  Anne Baxter was an excellent actress, but this isn’t among her most memorable outings generally (All About Eve, The Ten Commandments) or in westerns (Yellow Sky, Three Violent People, Cimarron).

There’s a superb supporting cast, many of whom are underused.  Walter Brennan does his shtick as the engineer of the Emma Sweeney (the locomotive involved).  Rory Calhoun, in the early part of his movie career, keeps to his pattern of playing bad guys in big-budget productions like this (River of No Return, The Spoilers) and good guys in more modest efforts (Dawn at Socorro, Apache Territory).  Arthur Hunnicutt was in his most productive period as a character actor (Two Flags West, Broken Arrow, The Big Sky) but has nothing here as Sad Eyes, the locomotive tender.  If you have quick eyes, you might recognize Marilyn Monroe in an early role as one of Miss Adelaide’s girls; so you would be wrong if you thought her only western was River of No Return (1954), with Robert Mitchum and Rory Calhoun.  Will Wright is perfectly cast as the elder Kit Dodge, and veteran villain (and former studio accountant) Jack Elam shows up without many lines as one of Col. Dawson’s henchmen. 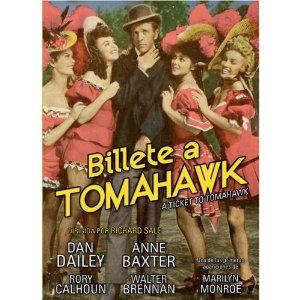 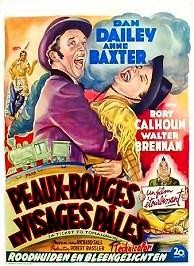 This is watchable, but not terribly memorable.  Director Richard Sale was known more as a writer (he provided the improbable story and the screenplay for this) than a director, and his directing career (twelve films, of which this was the third) was not particularly notable.  Shot in color, in and around Durango, Colorado, using the Denver & Rio Grande track.  90 minutes.