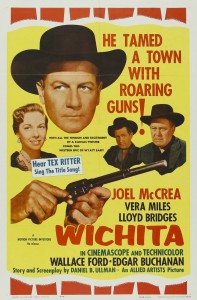 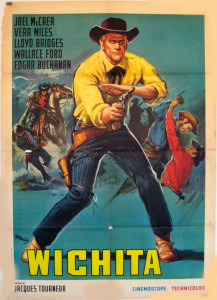 Director Jacques Tourneur is best remembered today for such 1940s fare as Cat People, I Walked with a Zombie (starring Frances Dee, Joel McCrea’s real life wife) and one of the very best films noirs, Out of the Past (1947), with Robert Mitchum, Kirk Douglas and Jane Greer.  In the 1950s he made several westerns with Joel McCrea, of which the best is probably Stars in My Crown.  Wichita is one of those Tourneur-McCrea collaborations, a supposed retelling of the early pre-Dodge City part of Wyatt Earp’s career as a lawman.

The railroad has just been brought to Wichita, Kansas, by Sam McCoy (Walter Coy).  It’s starting to attract more cattle herds and those in search of new business opportunities, like young Wyatt Earp (played by not-so-young Joel McCrea).  He camps overnight with one of those herds, and two of their cowboys, the Clements brothers (one played by Lloyd Bridges), try unsuccessfully to rob him while he sleeps.  Foiling that, he moves on to the town, where he meets the local newspaper editor Arthur Whiteside (played as a typical heavy-drinking western newspaperman by Wallace Ford) and his young assistant Bat Masterson (Keith Larsen).  His first action in town is to break up a bank robbery, getting him lots of attention from the law-and-order part of the citizenry. 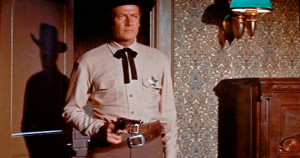 When wild cowboys shoot up the town and kill a young boy, Wyatt accepts the marshal’s badge and starts to clean things up.  Not everybody is happy with that, including Sam McCoy, who’d like to see the town a little more open to promote business.  McCoy’s daughter Laurie (Vera Miles) is romantically interested in Wyatt, though.  Wyatt bans the wearing of guns in town.  Doc Black (Edgar Buchanan), the most corrupt of the town fathers, tries to hire a couple of slick-looking newcomers to kill Earp, but they turn out to be his brothers Morgan (Peter Graves) and James (John Smith).  When Wyatt runs Doc out of town, he seeks out the Clements brothers and engineers an attack on Wyatt as he leaves the McCoy house.  Instead of Wyatt, they kill McCoy’s wife Mary (Mae Clarke).  Giving chase, the Earp brothers kill one and capture another.

As gunman Ben Thompson (Robert Wilke) and the rest of the cowboys are about to try to get Wyatt, they reconsider as Doc Black’s role in the killings and trying to take down Wyatt is revealed.  Presumably Wyatt and Laurie can now get together, although of course that didn’t happen in real life.

In general, this is a pretty typical town-taming story.  Joel McCrea can play Wyatt Earp’s stern rectitude easily, but at 50 he’s too old for a young Wyatt, and too old for the lovely 27-year-old Vera Miles, who is fine but not very central to the story here.  Wallace Ford is also fine as hard-drinking newspaperman Arthur Whiteside, but we’ve seen this character before—notably Edmund O’Brien in The Man Who Shot Liberty Valance (also with Vera Miles, this time romanced by the too-old James Stewart and the too-old John Wayne), and even Thomas Mitchell’s Doc Boone in Stagecoach.  Edgar Buchanan does well as a villain, as he did in Texas (1941), with Glenn Ford and William Holden.  Robert Wilke and Jack Elam appear as bad guys, and the rest of the supporting cast is good.  You might even see future director Sam Peckinpah in an uncredited appearance as a bank teller.

So how do these goings-on relate to the actual Wyatt Earp and Bat Masterson?  In real life, Wyatt Earp’s first law enforcement job was for a year in Wichita in the late 1870s, where he was deputy sheriff, not the main man.  He was 28 at the time.  Although Bat Masterson finished his career as a New York sportswriter, at this early stage he’d met Wyatt Earp when they were both hunting buffalo.  Wyatt didn’t take up any long-term romantic relationships in Wichita.  His brother James never did much in the law enforcement business, unlike Morgan and especially Virgil.  All in all, this isn’t very accurate historically. 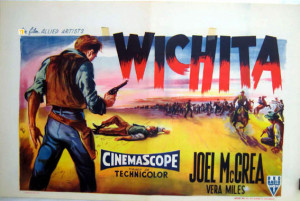 But it is worth watching, if not the most memorable of Joel McCrea’s westerns.  McCrea was a good actor, and in the late 1930s and early 1940s was a bigger star than John Wayne.  Like Gary Cooper, even if he’s too old for the role, he’s watchable.  This movie makes him the only star to play both Wyatt Earp and Bat Masterson (The Gunfight at Dodge City, 1959).

The title song, sung by Tex Ritter, is forgettable.  Shot in color, at 81 minutes.