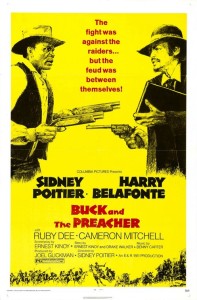 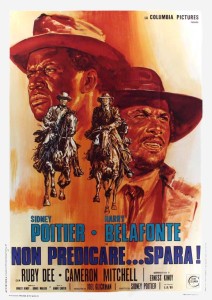 The Buck of the title is Sidney Poitier in his second western, playing a former slave and former buffalo soldier who is now a wagon master helping free blacks move west in the face of night riders who are paid to drive them back to their southern homes to pick cotton.  The Preacher is Harry Belafonte, also a former slave, now a con man who uses a religious background for cover.  As you might guess from those two main characters, this western focuses primarily on black characters, a novelty for its time.

After the Civil War, newly free blacks are seeking greater freedom than they can find in their Mississippi delta homeland.  The Pecos River is mentioned several times, so they seem to be in Texas.  At the same time, Deshay (Cameron Mitchell, wearing the remnants of a Union uniform of sorts) and his night riders are paid to terrorize them and drive them back to Louisiana, so they will once again be a source of cheap labor.  Deshay is also consumed with finding and killing Buck, for whom he offers a reward of $500.  Buck, trail-wise and good with guns (he has a special pair of cut-down shotguns in holsters, in addition to his regular pistol) is not so easy to find or kill. 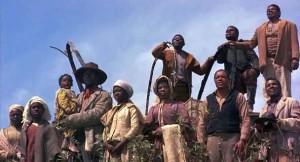 When Deshay not only hits a wagon train that Buck has led but lays an ambush for Buck at his woman’s cabin, Buck barely escapes.  In his need to keep moving, he switches horses with the Preacher, whom he catches bathing in a stream.  (The Preacher says he is Willis Oakes Rutherford of the High and Low Orders of the Holiness Persuasion Church, but that sounds much too grandiose for the footloose ruffian he appears to be.)  The wagon train Buck is currently leading is hit by Deshay and his men, and Buck heads for Copper Springs, where Deshay is based; the Preacher tags along.  The two of them attack Deshay and his men while they are sporting at Miss Esther’s, killing eight, including Deshay.

Making their escape, they find that Deshay had spent almost all of the $1400 he had stolen from Buck’s people.  To recover it, they decide to rob both the express office and the bank in Copper Springs while the posse is chasing them.  It’s not without incident, but they are successful, and the robbery nets them $1800 each.  The Preacher plans to return to Illinois, but finds his way blocked by the posse on their heels.  As they run for Buck’s wagon train, the pursuers are blocked by Indians (of an unspecified tribe), who say they will allow the blacks passage through their land but will not fight for them. 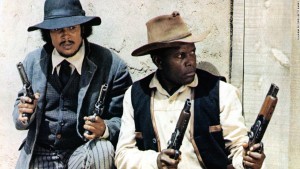 [Spoilers follow.]  Deshay’s nephew kills the Copper Springs sheriff (who appears not to have anything against blacks) and continues the pursuit with the remnants of the posse.  Buck and the Preacher draw them off but are trapped in some rocks, killing several posse members but are also wounded themselves.  As things look hopeless, their Indian guides begin picking off posse members.  In the final scene, the patched-up Buck, the Preacher and Buck’s woman (Ruby Dee) are headed on their way with the wagon train (and presumably the proceeds of the robberies).

This is watchable, but not as good as Poitier’s first western (Duel at Diablo, 1966).  Poitier was the pre-eminent black actor of his time, and, although he is not a natural in westerns, he brings his considerable acting ability and strong sense of dignity and authority to the role.  Belafonte does well as the skeevy Preacher, playing off that dignity.  Ruby Dee is excellent as Buck’s woman, who wants to be freer than Texas allows and maybe move to Canada, but her role, as that of many women in westerns, is mostly extraneous. 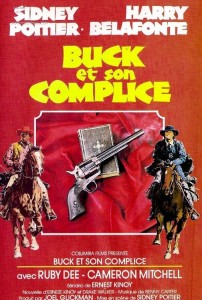 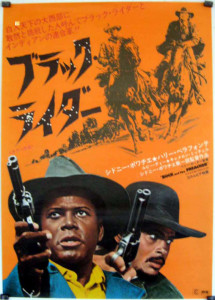 Poitier was here making his first foray into directing (he has nine directing credits), and the direction here is mostly unexceptional.  For what turns out to be mostly an action movie, there are several slow-moving sections, particularly in the first half of the film.  But Poitier and Belafonte get points for putting together and executing something that had largely not been done before.  They also get some credit for not making all the whites unrelievedly nasty (e.g., the decent sheriff of Copper Springs, who does not survive the movie).  In keeping with the spirit of the times, the Indians are all noble and oppressed, too.  Shot in color in Durango, Mexico, at 103 minutes.  Rated R for brief nudity (principally Belafonte’s derriere) and mostly for all the violence.

For other westerns featuring black people, see our post on Blacks in a White and Hispanic West.  For a good western featuring con men (one of whom is black) from about the same time, see Skin Game (1971), with James Garner and Louis Gossett, Jr.  For another black con man in Texas before the Civil War, see Ossie Davis (Ruby Dee’s husband) in The Scalphunters, with Burt Lancaster (1968).